‘Is there design this good
that doesn’t kill people?’ 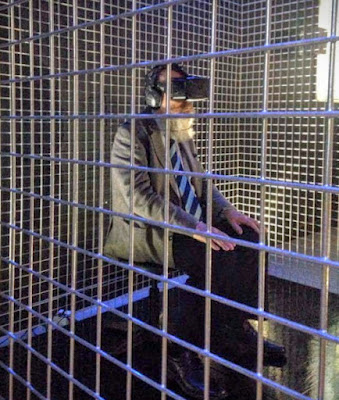 ‘The Weight of Water’ ... trying to visualise the experience of a Syrian refugee seeking asylum in a dark place

What is the experience of a Syrian refugee seeking asylum in a dark place?

How frightening is it to stand under the shadow of a drone?

How alienated do young people feel when they are the victims of a mosquito-sounding youth crowd repellant devise in a shopping precinct?

What is the impact on human flesh of bullets from an AK-47 and an M16 colliding?

Indeed, why did Mikhail Kalashnikov design the AK-47?

Does a Bitcoin Miner cost more to produce bitcoins than they are worth?

Does the extra cost of producing Miracle Rice outweigh the benefits it was supposed to bring?

These questions, and many more, are asked at ‘Design and Violence,’ a challenging and radicalising exhibition in the Science Gallery in Trinity College Dublin, co-produced with the Museum of Modern Art in New York.

What happens when design and violence collide?

How can an act of creative destruction surprise us with consequences both intended and unintended?

The organisers believe that 100 years after the Easter Rising, it is time to reflect but also look to the future and ask what happens when creativity, art and engineering mix with power, pain and politics. This exhibition explores the manifestations of violence in contemporary society and features works from the original curatorial selection alongside new works and artefacts.

The exhibition, which I visited late yesterday afternoon [14 October 2016], continues an online curatorial experiment originally hosted by the MoMA and explores the manifestations of violence in contemporary society. It features works from the original curatorial selection alongside new works and artefacts.

‘The Weight of Water’ is a new virtual-reality installation by Elaine Hoey on the experience of seeking asylum in a dark landscape. She invites viewers to experience an abstract visual landscape while navigating the difficult boat journey made by refugees as Europe begins to close its borders to people seeking refuge.

The viewer is both spectator and performer, on a boat with others on a night-time ocean, traversing a space that is part real and part fantasy.

The unnamed artist notes that ‘as the majority of us view the unfolding refugee crisis at a distance, this distance allows the safety of the screen to separate us from experiencing the harsher realities of this crisis. Virtual reality can be seen to collapse this distance between the viewer and the screen, reasserting a sense of presence’ as a witness with an augmented – but always partial – understanding of these traumatic and grim experiences.

What is the impact of two high-speed bullets on human flesh? (Photograph: Patrick Comerford, 2016)

To create this work, the unnamed artists aligned an M16 and an AK47, the two main assault rifles that were used by the US and Vietnam during the Vietnam War. They fired them at each other inside each other in a block of ballistic gelatine so that the two bullets collided and fused together.

Ballistic engineers used gelatine to simulate the density of human flesh. The artists described their desire to have two bullets from opposing sides conjoin to form ‘a stalemate of a moment,’ capturing the instant of impact ‘like a freeze frame.’

Why did Mikhail Kalashnikov design the AK-47? (Photograph: Patrick Comerford, 2016)

Why did Mikhail Kalashnikov design the AK-47?

Is there design this good that doesn’t kill people?

The Automatic Kalashnikov, or AK-47 rifle, is named after its designer, Soviet military engineer Mikhail Kalashnikov, and the year of its launch, 1947.

Building on previous assault rifle technologies, Kalashnikov designed the AK-47 to be lightweight, easy to handle, durable, and cheap to produce.

Since becoming the standard issue weapon for the Soviet military in the 1940s, it has gone on to signify left-wing resistance and anti-colonial struggle, even finding its way onto the flag of independent Mozambique.

But by the same token, it is also a symbol of crime and stateless terrorism, involved in countless atrocities. It is a testament to the power of design that making a tool like this easily accessible, reproducible and adaptable has had such wide political and social impact. It also underscores the continuing role of violence in social change.

It is estimated today that there are 75 to 100 million AK-47s of varying authenticity in circulation worldwide, making it the most prevalent gun in the world.

The subtitle for this exhibit is borrowed from a GOOD magazine cover in September 2007/2008: ‘Is there design this good that doesn’t kill people?’ 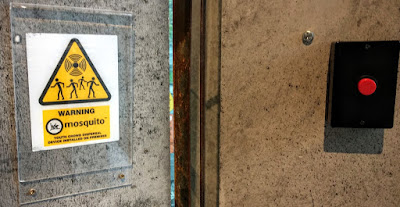 Mosquito repellent device … but what is its impact on the health of children and young people (Photograph: Patrick Comerford, 2016)

The Mosquito compound security device system was designed in 2005 for the sonic exclusion of young people.

The mosquito emits an irritatingly high-pitched sound that is audible only to young people, as the capacity of adults to hear high frequencies deteriorates with age. The device is used to deter loitering and ‘anti-social’ behaviour by teenagers.

Its UK manufacturers promote the device on this basis: ‘Every day we receive calls from people wanting to buy a Mosquito Anti-loitering Device. People like you who are fed up with groups of kids damaging their property, hanging around in rowdy groups, smoking and drinking, playing music and generally preventing you from enjoying your home or business … The Mosquito device is the only product on the market that has the teeth to bite back at these kids.’

Research has not conclusively shown the health effects of long-term exposure to such noises. In 2009, the Children’s Rights Alliance stated that they believe the use of such a device ‘constitutes an assault on children and young people.’ There has yet to be a legal test of this in Ireland.

The device also inspired a ‘Mosquito ringtone’ that was so high-pitched that only young students could hear their phones’ alerts, unbeknownst to their teachers.

To find out the answers to the other questions, visit the exhibition, which opened on Thursday evening [13 October 2016] and continues until 22 January 2017.