In the small, narrow streets and passageways that run between George’s Street and Grafton Street, there is new life in the coffee shops, cafés, stalls, wine bars and restaurants.

But in Little Stephen Street, Charles Byrne Musik Instrumente claims to be ‘Ireland’s oldest family music shop.’ This quaint shop at Nos 21-22 is a landmark in this part of Dublin, alive with musical wonder and stuffed to the gills with every stringed instrument imaginable.

It must be difficult for music lovers not to fall in love with the shope, with shelf upon shelf of musical delights.

The quaint name seems a pretence. But Charles Byrne Musik Instrumente dates back to 1870, and with four generations of expertise behind them, they are specialists in stringed instruments and traditional Irish music.

Whether it is an Irish fiddle you are looking for, or perhaps a bouzouki, the staff there can help you find what you are after. They are specialists in stringed instruments, and sell classical and traditional Irish instruments, as well as a variety of folk instruments.

This family-owned and run business boasts a long tradition of excellence. It was established in 1870 on the north side of Dublin by the original owner, David Charles Byrne, and at first the family business specialised in pianos, harps and harpsichords.

In its time, the premises have seen many historic events, from the Home Rule era to Independence, and played its part in activities during the Rising and War of Independence. The family likes to say, ‘Booms and recessions, times of conservatism and progress, we’ve seen them all.’

Since the 1960s, the shop has specialised in stringed instruments, including violins, violas, cellos, mandolins, banjos, bouzoukis, and Irish traditional music, including bodhrans, low and standard whistles, wooden flutes, spoons and bone.

In recent years, they have added many specialist and unique lines from music gifts – Curiosa Devon, Hal Leonard, Music Gifts, and Ceolnet Designs – to hand-made instruments such as Tim Adams Flutes, Kingstown Ukes.

Ukuleles have become a favourite part of the inventory and they are proud to represent many major brands, including Kala Lanikai Freshman and more.

Four generations of expertise here are combined with a strong after-sales service, as well as repairs and restorations, and a mail order service.

As I walked by late on Thursdayevening, I fretted, fearing the shutters indicated the shop had closed. Thankfully, those fears were misplaced. It’s simply that the shop keeps unusual hours.

The shop’s opening hours in 2020 are: Tuesdays, Thursdays and Fridays, from 1 pm to 5 pm, Saturdays, 11 to 5. If you are planning to visit soon, the shop is closed for annual holidays from 15 August until 1 September. 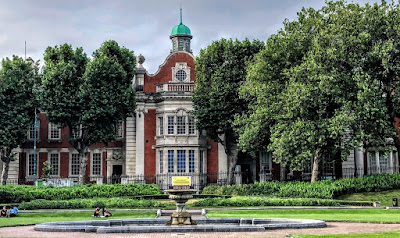