‘We are ugly but we have the music’ 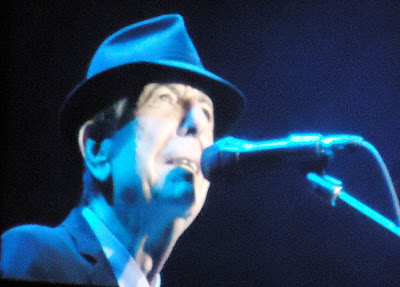 I was in the O2 at the Point in Dublin last night for the first of Leonard Cohen’s two concerts in Dublin on his fifth visit to Ireland in six years. The O2 has none of the atmosphere of the Royal Hospital in Kilmainham (2008 and 2012) – nor of Lissadell House (2010) – as a venue for a Leonard Cohen concert.

Even thoug he played in the O2 in 2009, it is a functional venue … but last night we saw and heard Leonard Cohen at his very best.

He will be 79 in twelve days time [24 September], but he told us last night: “I’m not quite ready to hang up my boxing gloves just yet ... I don’t know when we’ll meet again, but tonight we’ll give you everything we’ve got.”

And last night he gave it everything he had … and as an audience we replied with everything we had too.

The evening opened with Dance Me to the End of Love, which I was saying earlier yesterday I want played when it comes to my time and my coffin is being carried out of the church.

Leonard Cohen’s concerts are always a combination of entertainment, poetry, deep spirituality, good music, love and lament, and irreverent good humour. We had a lively night last night, and the maestro was on stage from shortly after 7.30 until after 11.15, with only a short interval, and in all we heard 30 numbers from right across the Cohen corpus, from the beginnings to latest album from last year, Old Ideas. 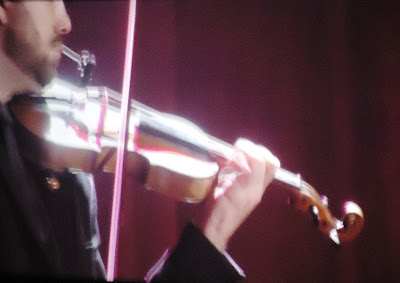 Dance me to your beauty with a burning violin … Alexandru Bublitchi on stage last night (Photograph: Patrick Comerford, 2013)

We were treated to virtuoso performances from Cohen and his team of nine backing singers and musicians. He introduced them with generosity: Sharon Robinson, his “co-writer and collaborator,” who also gave us a solo rendition of Alexandra Leaving; and the Webb sisters, Charley and Hattie, who are always sublime and last night were introduced last night as “two blossoms” from a “country lane” – they accompanied themselves on harp and guitar as they sang If it be your will.

There were similar generous acknowledgments for his full team of musicians, including guitarist Mitch Watkins, laud player Javier Mas and Alexandru Bublitchi on his burning violin,” which so plaintive and sad so many times last night.

We laughed at Leonard’s self-deprecating jokes – “I was born with the gift of a golden voice” and “He’s a lazy bastard, living in a suit.” We could not agree with Janice Joplin’s supposed observation, “we are ugly but we have the music.” We waltzed – or least half a dozen couples in the aisles – waltzed to Take This Waltz.

He danced, he stomped, the tripped lightly, he played the guitar and the keyboards, and he knelt ... in reverence, in penitence, perhaps even in prayer.

We were there with Suzanne, Marianne, Jane who came by, and the Battle King composing ... and in a sublime way too with the other great poets Cohen admires and is inspired by, including CP Cavafy and Federico García Lorca. We were the Beautiful Losers at the Favourite Game.

There were at least five if not six standing ovations, and at the end of the evening, he returned three times. When it came to his closing number Closing Time, we hoped that this was no way to say goodbye.

Leonard Cohen is playing again tonight [12 September] in the O2 in Dublin. I hope he’s back again next year – preferably in the Royal Hospital in Kilmainham.

Posted by Patrick Comerford at 20:19 No comments: