A ‘perfect day’ on the beaches
before the storms sweep in 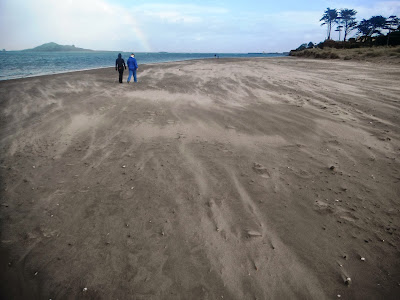 Signs of a gathering storm on the beach at Sutton this afternoon (Photograph: Patrick Comerford, 2013)

We have been waiting for a hurricane-force storm to sweep across these islands, flights and ferries have been cancelled and trains are not running in southern England, throughout Greater London and East Anglia tomorrow morning [Monday 28 September 2013], causing severe commuter disruption.

The selfish gene in me is hoping that this storm passes quickly and that I can catch a flight to Birmingham early on Tuesday morning for a working week that takes me to theological colleges in Oxford and Nottingham, ending, hopefully, with All Saints’ Day in Lichfield Cathedral on Friday [1 November 2013].

I was in Christ Church Cathedral, Dublin, this morning, where I was deacon at the Cathedral Eucharist, reading the Gospel, and assisting at the distribution of the Holy Communion.

This is also a bank holiday weekend in Dublin, and threatening storms always bring with them the promise of brisk walks on wind-swept beaches. So, in the early afternoon, three of us headed north of Dublin, along the coast at Clontarf and Dollymount, to visit some of the beaches of Fingal and Co Meath.

We thought our first stop would be in Howth but before we reached Howth we decided to the Burrow Beach and the Claremont Beach, which run to a total length of 1.2 km west of Howth and east of Sutton Golf Club, hidden behind the Dart line and a row of elegant suburban houses.

These paired beaches face north towards Ireland’s Eye and Lambay Island. As the three of us walked along the sand in the blustery afternoon, there was a rainbow in the sky but few people braving the weather, with light sand sweeping along the surface of the beach. It was obvious a storm was brewing.

We headed back to Sutton Cross, where my eye was caught a sign adverting “Cross Barbers ... Open 7 Days.”

Cross Barbers? I wondered how cross? As cross as Sweeney Todd, the Demon Barber of Fleet Street?

From Sutton Cross and Baldoyle, we drove along the coast to Portmarnock, where the tide was beginning to batter the long beach. The warnings had been heeded, it seems, and once again there were few people on the beach.

The windows in the chapel at Gormanston College ... inspired by Coventry Cathedral (Photograph: Patrick Comerford, 2013)

A little further north, in Malahide, the roads were flooded. We joined the M1 north of the Emmaus Retreat Centre at Swords, and decided to stop once again at Gormanston, not to walk on the beach where I have happy memories of playing beach cricket as a teenager but to see my old school at Gormanston Castle.

The school gates were locked, and everyone seemed to be away from Gormanston College for the half-term break. But we stopped to walk through the playing fields, to see the majestic castle, and to walk through the yew walks, said to have been created by a Lord Gormanston as a triangular-shaped cloister in the late 17th century for his daughter so that she would not feel the need to become a nun.

Before leaving, we stopped at the chapel, with its windows based on designs for Coventry Cathedral. 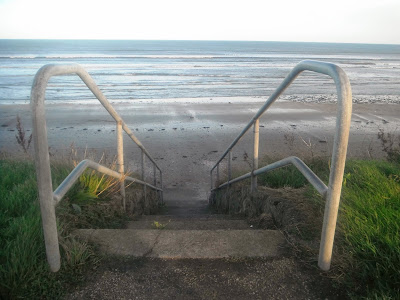 Stepping down onto the beach at Laytown (Photograph: Patrick Comerford, 2013)

At Julianstown, we turned east, and joined the coast once again at Laytown, where we stopped briefly, looking out onto the Irish Sea.

Darkness was closing in early when we arrived at Bettystown – the loss of an hour with the change on the clocks last night made the afternoon so short today, and the looming storm hastened the closing in of darkness.

In Relish, we were given a table close to the window, and watched the waves and the fall of the evening shadows as we had an early dinner in this wonderful restaurant.

It was 6 p.m. when we stepped down from the terrace behind Relish onto the beach below. In the silence of the dark evening, the sound of the waves beating against the beach was another portent of the gathering storm.

But in the words of Lou Reed who died earlier today, it was Just a Perfect Day.


Posted by Patrick Comerford at 21:35 No comments: