Enjoying Ballybur Caste in the sunshine 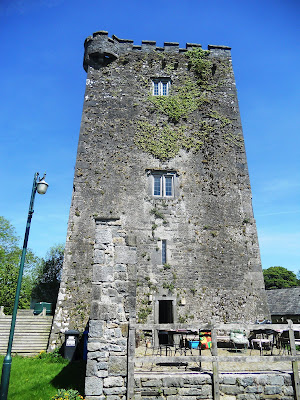 It was an early start this morning, but I was back in Kilkenny today for the second time this week, visiting Ballybur Castle, the Comerford ancestral home near Cuffesgrange, about 8 km south of Kilkenny on the road to Callan.

I travelled with Jim and Camilla Comerford from Atlanta, Georgia, and their son, Jimmy, who are visiting Ireland.

We were he guests of Frank Gray, who bought Ballybur in 1979 from the Marnell family for £20,000 and has spent over three decades lovingly restoring this 16th century tower house, bringing it back to its Tudor glory.

I first visited Ballybur in 1970, when the castle had become squalid and appeared to be facing certain ruin. 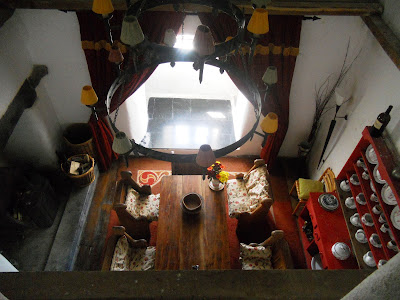 Looking down on the dining hall in Bally bur Caste from the minstrel gallery (Photograph: Patrick Comerford, 2012)

As Frank brought us from room-to-room and up through each floor, Frank told us how he has painstakingly restored the castle, sourcing local timbers, stone and glass and slate from the Ponsonby home in Kilcooley Abbey, Co Tipperary.

Each room and each floor now has the feeling of elegance that my ancestors must have lived in when they lived at Balybur until they lost the castle with the Cromwellian confiscations of the 1650s. 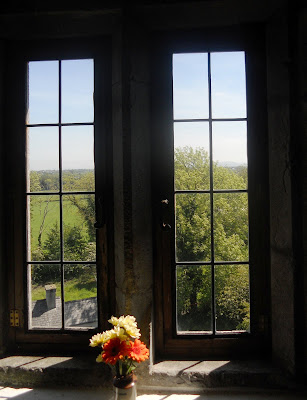 Each room and each floor has a view across the surrounding countryside (Photograph: Patrick Comerford, 2012)

We were brought from the entrance hall, where I remember visiting the Marnells, up to the banqueting hall with its minstrel galleries, to the chapel, the bedrooms, and the great hall, before climbing up to battlemented parapets, with views across broad sweeps of the countryside of Co Kilkenny, Co Tipperary and the borders of Co Carlow and Co Wexford, from Slievenamon to Mount Leinster. 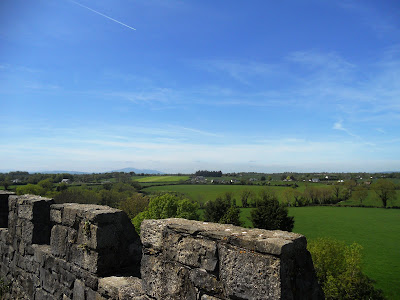 Looking across the countryside from the battlements of Ballybur Castle (Photograph: Patrick Comerford, 2012)

We lingered for a while before eventually heading into the village of Cuffesgrange, where I showed my visitors the remains of a Comerford memorial from the early 17th century, rescued in the 19th century by Bishop Michael Comerford and placed in the corner wall of the parish church.

Back in Kilkenny, we had lunch opposite Kilkenny Castle in the Kilkenny Design Centre, and there we met more members of Camilla’s extended family, her brother-in-law and her niece.

After bidding our farewells, I strolled through the streets of Kilkenny, revisiting the Butterslip, where the Comerfords lived in the late 18th and early 19th century and Saint Mary’s Church where – at long, long last – the churchyard is being restored. 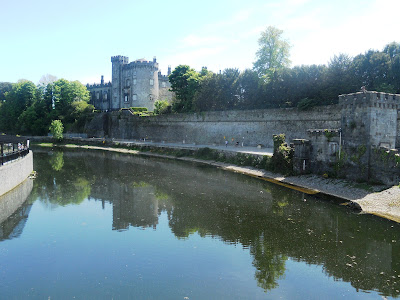 Kilkenny Castle, reflected in the waters of the River Nore this afternoon (Photograph: Patrick Comerford, 2012)

I stopped for coffee in a delightful but unnamed shop in John Street, beside the council offices in the former premises of Kilkenny College.

Opposite the train station, I visited Saint John the Evangelist Church, also known as the O’Loughlin Memorial Church, for the first time.

But that’s a story for another day.

The afternoon train journey back to Dublin was a summer’s joy, , through the countryside in Kilkenny, Carlow and Kildare, with fields of green and yellow, with horses, cattle and lambs, and with sun-filled blue skies. 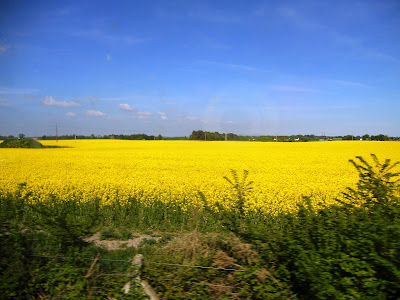 A train journey through fields of green and yellow and skies of blue (Photograph: Patrick Comerford, 2012)