Three parables told in
the Charlotte Barrington
window in Limerick I was in Saint Mary’s Cathedral, Limerick, early yesterday (12 January 2022), to meet colleagues in advance of a meeting in the Deanery.

The cathedral is filled with exquisite stained glass, But one window I had not photographed or described before is the Charlotte Barrington window on the south wall, sponsored by Croker Barrington in memory of his mother, Charlotte in 1858.

The top row of the Charlotte Barrington window tells the Parable of the Talents (Photograph: Patrick Comerford, 2022)

The middle row of the Barrington window tells the Parable of the Talents.

The middle row of the Charlotte Barrington window tells the Parable of the Good Samaritan (Photograph: Patrick Comerford, 2022)

The middle row of the Barrington window tells the Parable of the Good Samaritan.

The bottom row of the Barrington window tells the Parable of the Vineyard and Wicked Tenants (Photograph: Patrick Comerford, 2022)

The bottom row of the Barrington window tells the Parable of the Vineyard and Wicked Tenants.

A plaque beneath this window reads: ‘In memory of Charlotte, wife of Sir Matthew Barrington, Bart, who died November 18th 1858, this window was filled with stained glass by her son, Croker Barrington, as a mark of affection.’

Sir Matthew Barrington (1788-1861), 2nd baronet, was a benefactor, lawyer, and landowner. He was born 21 May 1788 in Limerick, the eldest of five sons and two daughters of Joseph Barrington, pewterer, and Mary Barrington (née Baggott).

He was educated in Limerick and at the King’s Inns, and established a thriving practice as a solicitor practice in Dublin and Limerick before being appointed Crown Solicitor for Munster. He held this post from 1814 until his death in 1861.

This was a period of political and agrarian unrest, and Barrington was respected for his integrity and professional judgment. He knew Daniel O’Connell, who organised a meeting on his estate in June 1843, attracting 200,000 people.

Barrington was a member of the River Shannon commission, solicitor and adviser to the Great Southern & Western Railway, and in 1848 he selected the site and chose the name for Limerick Junction, which remains notorious for the awkward manoeuvres needed for arriving and departing trains.

Barrington amassed a considerable fortune and in 1832 declined an invitation to stand for election as an MP for Limerick. He also founded of Barrington’s Hospital in Limerick and the City of Limerick Infirmary.

Barrington first acquired land in Co Limerick he married Charlotte Hartigan on 1 January 1814. Her father William Hartigan (1766-1812) was one of the surgeons who attended the dying Lord Edward Fitzgerald on his deathbed after the 1798 Rising. He built Barrington Bridge, laid out a magnificent park, created an artificial lake, and by 1825 had developed the village of Murroe for workers as he prepared for the building of Glenstal Castle.

Glenstal Castle was designed by the London architect William Bardwell (1795-1890) and work began in 1835. The castle, bought by the Benedictines in 1926 and is now at the heart of Glenstal Abbey and the school.

Barrington died on 1 April 1861 and was buried in the family vault in Saint Mary’s Cathedral, Limerick. His son Sir Croker Barrington (1817-1890), who erected the window and memorial, eventually succeeded as the fourth baronet in 1872. 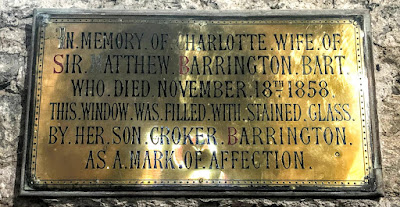 With the Saints through Christmas (19):
13 January 2022, Saint Hilary of Poitiers 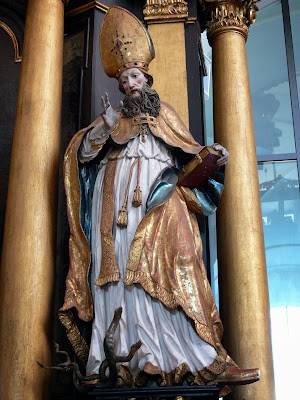 Saint Hilary of Poitiers … the ‘Athanasius of the West’

This is a busy week, with meetings in Askeaton, Limerick and Dublin, and columns to write for diocesan magazines. But, before this day gets busy, I am taking some time early this morning for prayer, reflection and reading.

Saint Hilary (Hilarius) of Poitiers (ca 300-ca 368) was Bishop of Poitiers and is a Doctor of the Church. He was sometimes referred to as the ‘Hammer of the Arians’ (Malleus Arianorum) and the ‘Athanasius of the West.’ His name comes from the Latin word for happy or cheerful.

Hilary was born at Poitiers at the end of the third or beginning of the fourth century. His education included some knowledge of Greek, and he later studied Old and New Testament writings, so that he abandoned his Neo-Platonism for Christianity, and with his wife and his daughter was baptised and received into the Church.

He was unanimously elected Bishop of Poitiers ca 350/353. At that time, Arianism was a major threat to the Western Church. Hilary secured the excommunication of Saturninus, the Arian Bishop of Arles, and of Ursacius and Valens, two of his prominent supporters.

He wrote to Emperor Constantius II, describing the persecutions the Arians used to try to crush their opponents (Ad Constantium Augustum liber primus, ca 355). But he was banished, along with Rhodanus of Toulouse, to Phrygia, where he spent four years in exile, traditionally for refusing to subscribe to the condemnation of Athanasius and the Nicene faith.

From Phrygia, he continued to govern his diocese, and wrote two of his most important contributions to dogmatic and polemical theology. His De synodis or De fide Orientalium (358), addressed to the Semi-Arian bishops in Gaul, Germany and Britain, supported the teachings of the Eastern bishops on the Nicene controversy. His De trinitate libri XII (359/360) is the first successful expression in Latin of the decisions in Greek by the Council of Nicaea.

Hilary also attended several synods while he was in exile, and attacked the Emperor Constantius as Antichrist and persecutor of orthodox Christians. Eventually, he returned to Poitiers in 361, shortly after the accession of Emperor Julian.

Back in his diocese in 361, Hilary spent most of the first two or three years trying to persuade the local clergy to abandon Arian subordinationism.

According to Saint Jerome, Saint Hilary died in Poitiers in 367.

His work shows many traces of vigorous independent thought. He wrote the first Latin commentary on Saint Matthew’s Gospel to survive in its entirety. This was strongly influenced by Tertullian and Cyprian, and made use of several classical writers. He also wrote an early commentary on the Psalms.

His major theological work was his 12 books now known as De Trinitate, written largely during his exile and completed after his return to Gaul.

Some consider Saint Hilary as the first Latin Christian hymn writer, because Saint Jerome says he produced a liber hymnorum, and three hymns are attributed to him. He is the pre-eminent Latin writer of the fourth century (before Ambrose). Saint Augustine calls him ‘the illustrious doctor of the churches.’

Saint Hilary is commemorated in the Church Calendar on 13 January. For English and Irish educational and legal institutions, Saint Hilary’s festival lies at the start of the Hilary Term which begins in January.

40 A leper came to him begging him, and kneeling he said to him, ‘If you choose, you can make me clean.’ 41 Moved with pity, Jesus stretched out his hand and touched him, and said to him, ‘I do choose. Be made clean!’ 42 Immediately the leprosy left him, and he was made clean. 43 After sternly warning him he sent him away at once, 44 saying to him, ‘See that you say nothing to anyone; but go, show yourself to the priest, and offer for your cleansing what Moses commanded, as a testimony to them.’ 45 But he went out and began to proclaim it freely, and to spread the word, so that Jesus could no longer go into a town openly, but stayed out in the country; and people came to him from every quarter.

The prayer in the prayer diary of the Anglican mission agency USPG (United Society Partners in the Gospel) invites us to pray this morning (13 January 2022):

We pray for the Diocese of Tanga as they launch their End Mother to Child Transmission of HIV programme.