Visiting the underground cities
and lost churches of Cappadocia 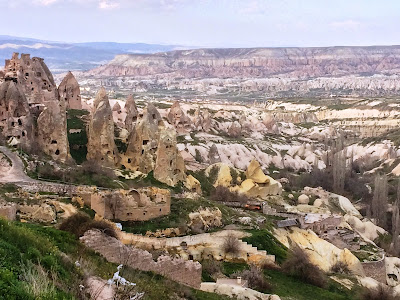 The “fairy chimneys” in the valley between Uchisar and Goreme (Photograph: Patrick Comerford, 2015)

Although we are now well into April, snow still covers the highest mountains in Cappadocia. The landscape is breathtakingly stunning, with the green plateau interrupted everywhere by the “fairy chimneys” or “fairy castles,” many carved into over the centuries to form family dwellings and churches.

As we drove through this landscape yesterday [7 April 2015] on the Green Tour with Andromeda Tours, we were reminded that the villages and towns had been inhabited by Greek-speaking Cappadocians until the dreadful expulsions of 1923.

Each town and village has a Turkish name today, but everyone remembers its original Greek name too. 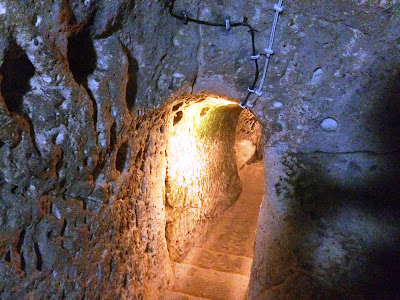 Inside the underground city at Derinkuyu, which goes down to a depth of about 85 metres (Photograph: Patrick Comerford, 2015)

This multi-level underground city at Derinkuyu descends to a depth of about 85 metres, and was served by one deep ventilation shaft. It is large enough to have sheltered perhaps 20,000 people, along with their livestock and food, with churches, chapels, schools, wine presses, wells, stables, cellars, storage rooms, refectories and even a burial chamber. Eventually I reached the cruciform church on the fifth or lowest level.

The first caves in the soft volcanic rock in Cappadocia may have been built by the Phrygian people in the 8th and 7th centuries BC. Xenophon provides the earliest written account of these underground cities. In his Anabasis he says the people in Anatolia carved out their houses underground, living well in homes large enough for their families, domestic animals, and supplies of stored food.

The Phrygian language gave way in Roman times to Greek and the people became Christians. Derinkuyu was fully formed as a city in the Byzantine era, when it was fortified against Muslim Arab invaders in the Arab-Byzantine wars (780-1180). Derinkuyu and the other linked underground cities continued to be used by the Greek-speaking Christian people as protection against the Mongolian invasions led by Timur in the 14th century. 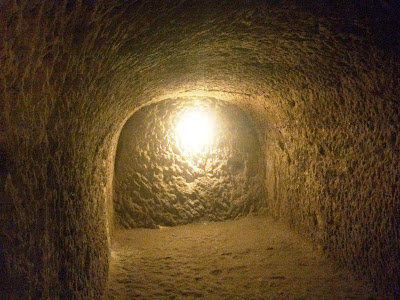 Inside the church in the underground city of Derinkuyu (Photograph: Patrick Comerford, 2015)

After the region was captured by the Ottoman Turks, the cities became refuges (καταφύγια) from the Turkish Muslim rulers. As late as the 20th century, Cappadocian Greeks continued to use the network of tunnels and underground cities to escape persecution by the Ottomans.

The Christian people were expelled in 1923 in the population exchange between Greece and Turkey and the tunnels were abandoned. They were rediscovered in 1963, after a local resident found a mysterious room behind a wall in his home. Further digging revealed access to the tunnel network.

In all, 200 underground cities, each with at least two levels, have been discovered in the area between Kayseri and Nevsehir. About 40 of these have three levels or more. 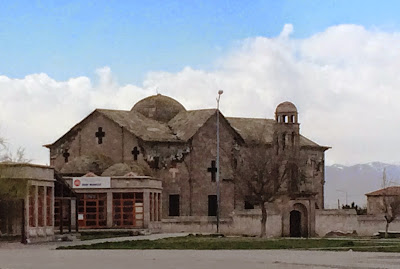 Today, the town of Derinkuyu has a population of about 10,700. But as we emerged into the daylight there was a stark reminder that until 1923 Derinkuyu was known to its Cappadocian Greek residents as Malakopea (Μαλακοπέα). Across the square from the entrance to the underground city stands the lonely and forlorn Greek Orthodox Church of Saint Theodoros Trion, like a sad scene in an Angelopoulos movie.

This once elegant church was built in 1858-1860, but has stood abandoned since 1923. Its walls have started to collapse, and inside the frescoes are probably crumbling. The promised restoration of the church and its bell-tower has been abandoned. 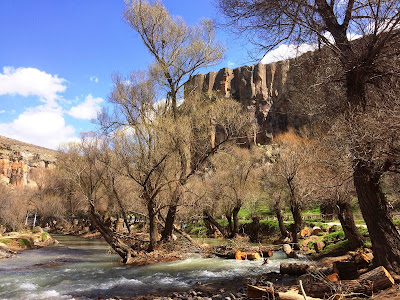 Walking along the banks of the Melendiz River in the Ihlara Valley (Photograph: Patrick Comerford, 2015)

From Derinkuyu , we travelled on the small town of Ihlara, near Güzelyurt, to visit the Ihlara Valley, a 16 km gorge that was cut into volcanic rock in southern Cappadocia following several eruptions of Mount Erciyes.

The Melendiz River flows through the valley, and the canyon walls are honeycombed with churches and dwellings and churches hewn and cut from the rock in Byzantine times.

These rock-hewn churches hold many well-preserved and richly-coloured frescoes, and this is one of the few places in the Byzantine world where paintings from the pre-iconoclastic period have survived. Iconoclasm had two periods in Byzantine history when the use of religious images or icons was banned by the Emperor Leo III. The first period lasted from 726 to 787, and the second period from 814 to 842. 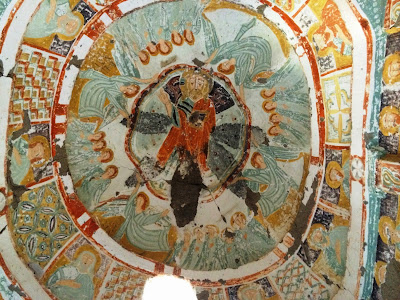 At the entrance to the valley we visited the Daniel Pantanassa Church, also known as the Church under the Tree and Ağaç Altı Kilisesi.

This church is greatly ruined extent today, but the original entrance was on the north side. We entered through the main apse, which is badly destroyed, and I was enchanted by the frescoes which date from the 9th to the 11th centuries.

On the left as one enters there are frescoes depicting the Annunciation, the Visitation and the Adoration of the Magi. In the north transept there are depictions of the Flight into Egypt, the Baptism of Christ and the Dormition of the Virgin Mary. The west end has frescoes with geometrical and floral patterns, and the Prophet Daniel in the Lions’ Den. 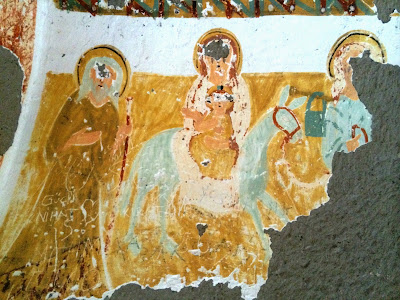 Above, inside the dome, is a colourful depiction of the Ascension, with Christ surrounded by angels, the apostles and prophets.

We trekked along the banks of the Melendiz River in the valley for about 4 km, and arrived in time for lunch at the village of Belisirma, which takes its name from the Greek Peristrema.

From Belisirma, we drove on to one of the great unexpected surprises in Cappadocia the rock-hewn monastery in Selime, at the end of Ihlara Valley. 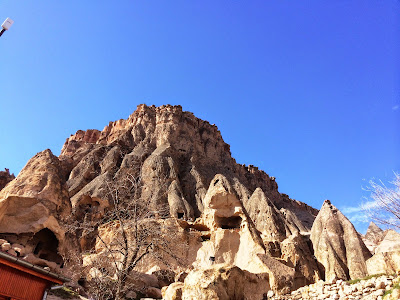 A steep and slippery hill from the road leads up to the monastery, through tunnels and corridor. Selime was known to the Hittites, Assyrians, Persians, Romans and Byzantines, and the monastery dates back to 8th and 9th centuries, although the surviving frescoes date back from the late 10th and early 11th centuries.

Selime Monastery is the biggest religious building in Cappadocia with a cathedral-size church. Inside the cathedral there are two rows of rock columns that divide the cathedral into three sections. The columns and arches, cut directly from the tuff within the monastery, still bear the marks from past generations, although the frescoes are barely visible under the layers of soot that cover the surfaces since the Turks used the cathedral as a cooking room.

The monastery complex includes the monks’ quarters, a large kitchen and a stable. The walls were once decorated with frescoes, but few of these survive today, and many of the surviving parts of the complex are threatened by continuing erosion of the rock.

Throughout the complex, there are secret passageways, and a series of twisting, ever-steeper rock stairway and ladders. At the top of the monastery is a fortress-like structure, whose walls and trenches can still be seen.

The climb down was less nerve-wracking than I expected. Across the road is a cemetery and the conical monumental tomb known as Selime Sultan Turbesi with an octagonal base and probably built in the 13th century. Behind the car park, the houses of the former Greek village that had grown up around the base of the monastery stood empty and abandoned. 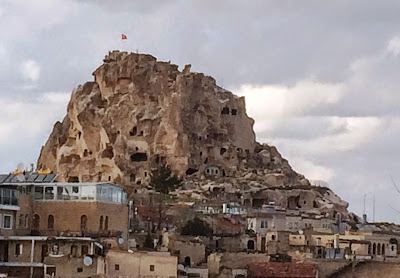 Uchisar Castle towers above the valley below (Photograph: Patrick Comerford, 2015)

From Selime, we drove on to Uchisar, which is on the highest point in Cappadocia, on the Nevsehir-Goreme road. We were now just 5 km from Goreme, and above us stood the magnificent Uchisar Castle, which towers above the valley below.

Many rock-cut churches have been found on the outskirts of the castle and inside it too. But most of the rooms, on the north side of the castle, are now used as pigeon houses or dovecotes. Local farmers have used these pigeon houses to collect pigeon droppings for a natural fertiliser for their orchards and vineyards.

Below us lay Pigeon Valley (Guvercinlik Vadisi) which connects Uchisar to Goreme. Most of these cave dwellings have been painted white to attract the birds and their valuable droppings. The “fairy chimneys” to the west, east and north of Uchisar were hollowed out and used as graves during the Roman period. The entrances generally face west and inside these rock cut tombs are stone slabs on which the bodies were laid.

After stopping for one more view across Goreme, we were back in the Maccan Cave hotel after a long day in time for dinner. 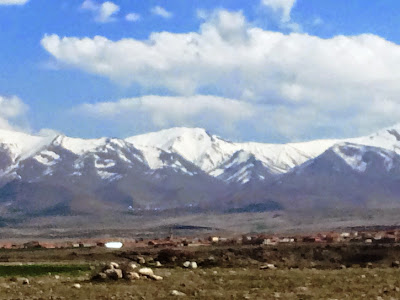 Posted by Patrick Comerford at 17:11 No comments:

An Easter acquaintance with
Patristic writers in Cappadocia 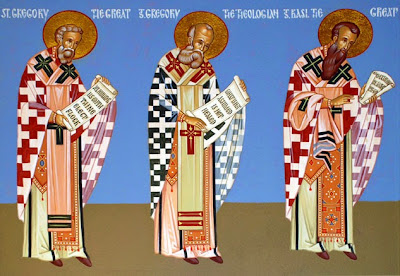 I am spending this Easter week in Cappadocia (Καππαδοκία) and already I have been introduced to history of this ancient area in Central Anatolia and some of the sites associated with the Cappadocian Fathers, key figures in Patristic writing.

Cappadocia was known to Darius and Xerxes and in the Persian Empire as “the land of beautiful horses.” Herodotus says the people were known as Cappadocians to the Persians, although the Greeks called them Λευκόσνροι (Leucosyri) or “White Syrians.”

The kingdom of Cappadocia still existed in the time of Strabo (ca 64 BC-ca 24 AD) as a nominally independent state, in which Cilicia was the district that included the capital, Caesarea, present-day Kayseri.

In the New Testament, the Cappadocians are named in Acts 2: 9, where they are one of the people to hear the Gospel in their own language on the Day of Pentecost. Early Christians used several underground cities in Cappadocia as hiding places during the early persecutions.

Kayseri or Caesarea had a population of 400,000 when it was destroyed by the Sassanid king Shapur I in AD 260. The city later recovered, and was home to several early Christian saints including Saint Dorothea and Saint Theophilus, the martyrs, and the Cappadocian Fathers, Saint Gregory of Nazianzus, Saint Gregory of Nyssa and Saint Basil of Caesarea.

The Cappadocian Fathers were key figures in the development of Patristic theology, and for most of the Byzantine era this region was relatively undisturbed. In the 4th century, Saint Basil established an ecclesiastic centre on the plain, about a mile to the north-east of Caesarea, which gradually supplanted the old town.

The site of Nyssa has been identified with the modern city of Nevşehir, where I arrived early on Monday morning [6 April 2015]. However, many scholars question this claim and instead they identify Nyssa with a site near present-day Harmandalı, close to Nevşehir Airport.

Later, the Crusaders knew Cappadocia as terra Hermeniorum or the land of the Armenians, because of the large number of Armenians who had settled there.

I am staying in the Maccan Cave Hotel in Göreme, near Nevşehir. Göreme was first settled in the Roman period, and the many surviving rock churches are evidence of the prevailing presence of early Christianity.

I hope to visit some of these churches in Göreme in the days to come. 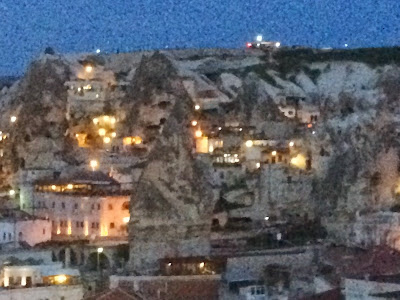 The lights go on in Cappadocia... a view from the balcony of the Maccan Cave Hotel in Göreme this week (Photograph: Patrick Comerford, 2015)