So, it’s farewell to Ealing today 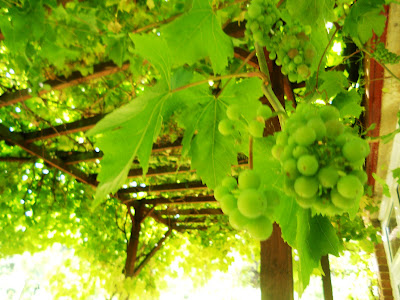 Farewell to a monastic garden ... overhanging vines in the garden at Ealing Abbey (Photograph: Patrick Comerford, 2012)

Farewell to Ealing Abbey, and the daily round of monastic prayers in the Benedictine tradition, with Mattins, Lauds, Terce, Sext, None, Vespers and – at the end of each day – Compline.

Farewell to the Conventual Mass each morning.

Farewell to the Scriptorium, with its book-lined walls and book-covered tables, desks and chairs.

Farewell to the monastery garden, with its trees, the sound of babbling water, the beehives and overhanging vines.

Farewell to the Benedictine Centre for Arts and Studies at Overton House, and seminars on Latin and Liturgy.

Farewell to a garden friendly to the birds and the bees, to beasts and to me.

Farewell to the labyrinth that led me round in circles and brought me back to the centre.

Farewell to the leafy lanes beloved of John Betjeman, where ‘bell-haunted quiet falls’ on a Sunday.

Farewell to the Ealing of green spaces at Haven Green, Ealing Green and Ealing Common.

Farewell to the Ealing of Ealing Studios and Ealing Comedy.

Farewell to the Ealing of Charles Blondin, who crossed Niagara Falls on a tightrope, and lived in retirement at Niagara House in Little Ealing.

Farewell to the Ealing of Billy Smart, once owner of the best-known circus.

Farewell to the Ealing of Brentham Garden Suburb, which was before its time.

Farewell to the Ealing of Castlebar Road, which has no connections with Co Mayo

Farewell to the Ealing of Maria Fitzherbert, who lived at Castlehilll Lodge, married a king and never became a queen.

Farewell to the Ealing of Agatha Christie, whose grandmother in Ealing may have been morphed into Miss Marple.

Farewell to the Ealing of Nevil Shute, who lived in West Ealing before his father moved to Dublin in 1912.

Farewell to the Ealing of the Revd William Dodd, the ‘Macaroni Parson’ whose forgery led to his death on the gallows.

Farewell to the Ealing of Ealing Broadway, riots, tubes and trains.

Farewell to the Ealing of Michael Saward, hymns and a family of indescribable bravery.

Farewell to the Ealing where Margot Fontayne had her first dancing lessons.

Farewell to the Ealing where Thomas Henry Huxley spent his boyhood.

Farewell to the Ealing of Philip Lawrence, who once taught.

Farewell to the Ealing of Freddie Mercury, who studied at Ealing College of Art, when he was still known as Faroukh Bulsara.

Farewell to the Ealing of Dusty Springfield, who was known as Mary Isabel Catherine Bernadette O’Brien when she went to school here and later worked in Bentall’s in Ealing.

Farewell to the Ealing of John Henry Newman, who went to Great Ealing School with his brother.

Farewell to the Ealing of Father Richard O’Hallloran, a petulant and pugnacious priest from Ireland who battled with Cardinal Vaughan and was excommunicated.

Farewell to the Ealing of Spencer Perceval, the only British Prime Minister to have been assassinated.

Farewell to the Ealing of Fred Perry and Lillian Board.

Farewell to the Ealing of Louis Philippe, Duc d’Orleans, who was a teacher at Great Ealing School before being crowned King of France.

Farewell to the Ealing of Saint Benedict’s, where Chris Patten, Julian Clary and Peter Ackroyd went to school.

Farewell to the Ealing of Pitshanger Lane, with its Greek and Italian restaurants, it friendly coffee shops, talkative newsagents, useful laundrettes and dry cleaners, its village atmosphere, and to the Village Inn.

Farewell to the Ealing of Thomas Merton, who in The Seven Storey Mountain tells of living in Ealing for a time with his aunt and uncle.

Farewell to the Ealing of Saint Peter’s Church, where I received a warm welcome last Sunday morning.

Farewell to the Ealing that welcomed me warmly, to Ealing Abbey that extended warm hospitality and to the monks who became friends.

And in the words of John Betjeman,

Return, return to Ealing,
Worn poet of the farm!
Regain your boyhood feeling
Of uninvaded calm! 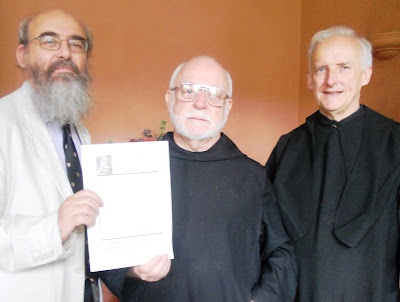 Receiving my certificate at the end of my course from Dom Ephrem Carr (centre), President of the Pontifical Liturgical Institute at Sant’Anselmo, Rome, and Professor of Eastern Liturgies at Sant’Anselmo and the Patristic Institute, the Augustinianum, in Rome, and Dom James Leachmann (right), Director of the Institutum Liturgicum, Ealing Abbey, Professor of Liturgy, the Pontifical Institute of Liturgy, San’Anselmo, and guest professor, KU Leuven
Posted by Patrick Comerford at 18:00 No comments:

I called to Kingston and found the ‘Bishop out of Residence’ 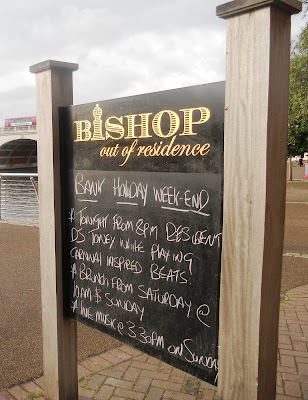 The ‘Bishop out of Residence’ on the banks of the Thames at Kingston upon Thames (Photograph: Patrick Comerford, 2102)

I had dinner last night with friends who live in Kingston upon Thames, in south-west London, about 10 miles from Charing Cross.

Kingston was once the place where the Saxon kings of Kent and Wessex were crowned by the Archbishops of Canterbury. Until 1965, Kingston was part of Surrey, and the administrative headquarters of Surrey County Council are still here. Today it is part of suburban London, but it retains many of its historical sites, and before dinner I had a walk around the town centre to look at some of them.

Kingston was occupied by the Romans and later it was either a royal residence or demesne. Kingston was built at the first crossing point of the Thames upstream from London Bridge and a bridge still stands on the same site. 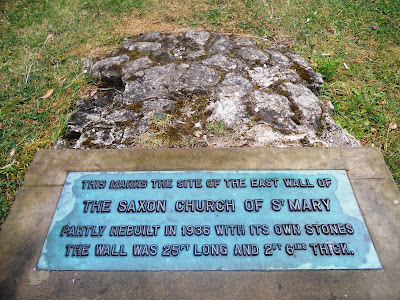 The ruins of Saint Mary’s Chapel, said to have been the site of the coronation of the Anglo-Saxon kings (Photograph: Patrick Comerford, 2012)

The name means “the king’s manor or estate,” and this place was first mentioned in 838 as the site of a meeting between King Egbert of Wessex and Archbishop Ceolnoth of Canterbury.

In the tenth century, several Anglo-Saxon kings were crowned in Kingston, including Æthelstan (925) and Eadred (946). Other kings who may have been crowned there include Edward the Elder (902), Edmund (939), Eadwig (956), Edgar (ca 960) and Saint Edward the Martyr (975). Finally, and Æthelred the Unready (979) was crowned here by Bishop Oswald of Worcester in 978. Local historians claim these coronations took place in the chapel of Saint Mary. 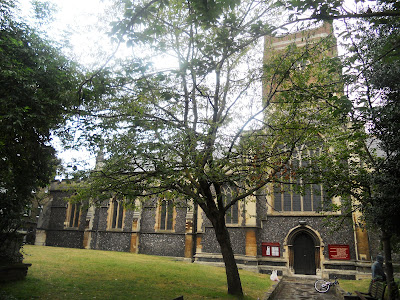 All Saints’ Church is the only Grade I listed building in Kingston (Photograph: Patrick Comerford, 2012)

We began our walking tour of Kingston at All Saints’ Church, the town’s 12th century parish church, set between the ancient Market Place and the main shopping centre. It is the only Grade I listed building in Kingston.

The present church, which was begun in 1120, is a cruciform church with a central tower and a four-bay nave, with perpendicular clerestory, choir, north and south aisles, transepts and chapels. The exterior is of flint with stone dressings and a parapet of stone battlements.

Inside, the church has a 14th-century wall painting of Saint Blaise, a 17th-century marble font attributed to Sir Christopher Wren, 12 bells and an 18th-century carillon and several notable monuments.

Outside the south door of the church are some outlines marked by stones – all that remains of the Saxon church and chapel of Saint Mary, where the Saxon kings had been crowned. Saint Mary’s Chapel, which also contained royal effigies collapsed in 1730, burying the sexton, who was digging a grave. 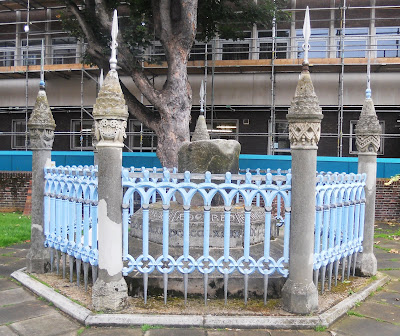 The ‘Coronation Stone’ was moved to the market place and railed off in 1850 (Photograph: Patrick Comerford, 2012)

A large stone was recovered from the ruins and has been pointed to as the Coronation Stone. In 1850, it was moved to the market place and railed off. 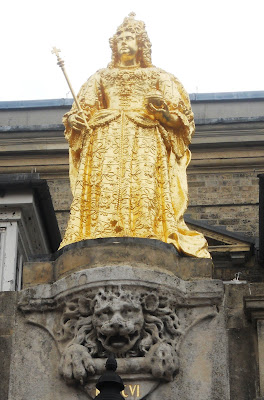 The statue of Queen Anne appears to preside over the Market Square in Kingston (Photograph: Patrick Comerford, 2012)

Nearby, in the square in front of the old Market Hall, stands a fine gold-coloured statue of a later monarch, Queen Anne, who appears to be presiding benignly over the shoppers, the stall-holders and the coffee drinkers. 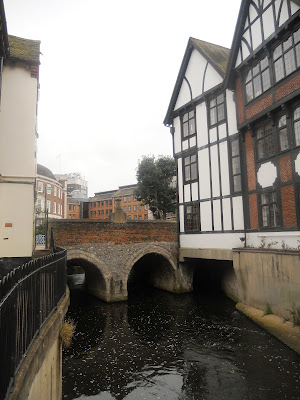 The Clattern Bridge over the Hogsmill River (Photograph: Patrick Comerford, 2012)

The Clattern Bridge over the Hogsmill River is mentioned in 1293 as “Clateryngbrugge.” From there we walked through the streets, admiring some of the older Tudor buildings and the remaining coaching houses, including the Druid’s Head, which claims to be the first place where the dessert syllabub was made in the 18th century. It was here too that Jerome K Jerome began his novel Three Men in a Boat. 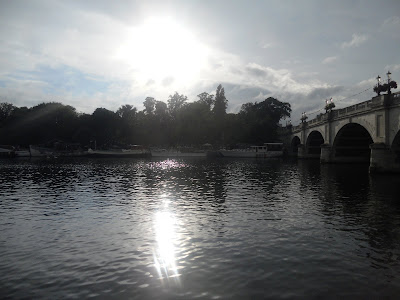 Late evening by the Thames looking across at the grounds of Hampton Court Palace (Photograph: Patrick Comerford, 2012)

We then strolled along the south banks of the Thames, with its lively river frontage of bars and restaurants. On the other side, a tree-lined river bank fronts the expanse of the park at Hampton Court, built by Cardinal Wolsey in 1520.

But the building with the most amusing name is a bar called Bishop out of Residence. The name refers to the Bishop’s Palace, built here by the river here for William de Wykeham (1376-1404), Bishop of Winchester and Lord Chancellor of England. He was born a peasant and died one of the wealthiest men in England, but seems to have spent little time at his palace in Kingston – and so a new pub is a reminder of old times.

And the it was back to dinner with good friends before returning through Richmond, Ham and Kew to Ealing Abbey.

Posted by Patrick Comerford at 12:58 No comments: 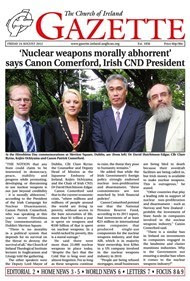 This week’s edition of The Church of Ireland Gazette [24 August 2012] carries this front-page news report and photograph. The report says:

“The notion that any State could claim to be interested in democracy, peace, stability and progress while promoting, developing or threatening to use nuclear weapons is not just beyond credibility – it is morally abhorrent,” according to the President of the Irish Campaign for Nuclear Disarmament, Canon Patrick Comerford, who was speaking at this year’s recent Hiroshima Day commemorations at Dublin’s Merrion Square.

“There is no morality in a political system that depends for its survival on the threat to destroy the survival of all,” the Church of Ireland Theological Institute lecturer in Anglicanism and Liturgy told the gathering.

The other speakers were the Deputy Lord Mayor of Dublin, Cllr Clare Byrne; the Counsellor and Deputy Head of Mission at the Japanese Embassy of Ireland, Kojiro Uchiyama; and the Chair of Irish CND, Dr David Hutchinson-Edgar.

Canon Comerford said that in the current economic crisis, “where millions and millions of people around the world are living in poverty, without access to the bare necessities of life, more than $1 trillion a year is spent on weapons and €100 billion of that is spent on nuclear weapons. In a world racked by poverty, this is a moral outrage.”

He said there were more than 23,000 nuclear weapons in place today, “despite the fact that the Cold War is long over and almost forgotten. For as long as these weapons continue to exist, the threat they pose to humanity remains.”

He added that while the Irish Government’s foreign policy strongly endorsed nuclear non-proliferation and disarmament, “these commitments are not matched by Irish financial policies”.

“People are being refused mortgages, small businesses are being bled to death because their overdraft facilities are being called in, but Irish money is available to make nuclear weapons. This is outrageous,” he stated.

“Other countries that play a leading role in support of nuclear non-proliferation and disarmament – such as Norway and New Zealand – prohibit the investment of State funds in companies involved in the nuclear weapons industry,” Canon Comerford said. “There is a similar ban in Ireland on investments in companies engaged in the landmine and cluster munitions industries. Why is the Government not ensuring a similar ban when it comes to the nuclear weapons industry?”

Posted by Patrick Comerford at 08:00 No comments: