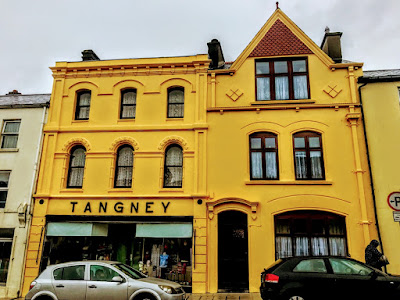 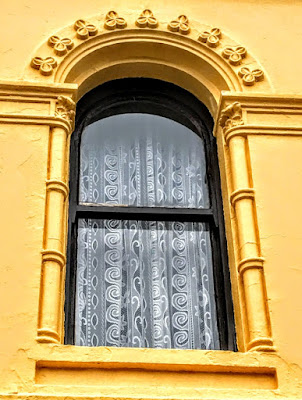 The tower is all that survives of Saint Anna’s Church, Drishane, on a hill on the south side of Millstreet, Co Cork (Photograph: Patrick Comerford, 2017)

On a hill overlooking most of Millstreet, and clearly visible from the former shops and pubs once run by my grandmother and my aunt, the early 19th century square tower is all that is left standing of Saint Anna’s, the former Church of Ireland parish church.

The former Church of Ireland church that once stood on this site was built by the local landlord, J. Wallis of Drishane Castle, replacing an earlier church that stood close to Drishane Castle and that probably dated from the late 15th century.

For centuries, the parish was part of the Diocese of Ardfert, which covered much of Co Kerry, and the parochial territory traversed the boundaries of Co Kerry and Co Cork. Many of the Vicars of Drishane were also Treasurers of Ardfert Cathedral or Archdeacons of Aghadoe, but the parish was often unable to financially support its own resident priest, and at times was united with neighbouring parishes, including, at times, parishes in north Cork that were part of the Diocese of Cloyne, such as Dromgtariffe and Nohovaldaly.

The earliest vicars of Drishane are recorded in 1463 or 1464, when Canon Matthew O’Falvey was holding Drishane as a sinecure, and was Treasurer of Ardfert Cathedral, Co Kerry. Soon after, the Revd Donald O’Sullivan was found guilty of simony in 1466.

If Drishane was treated as a sinecure and embroiled in accusations of simony, it is surprising that there are few or new records of serving clergy in the difficult years of the Reformation and throughout the 16th century.

By 1615, when the Revd John Proudville or Prenderville was Vicar of Drishane and Dromtariffe, it was noted that he was a ‘reading minister’ and that the church and chancel were being repaired.

Canon Deane Hoare, who Vicar of Drishane from 1784 until he died in 1795, was typical of the pluralist clergy of his time, holding many Church appointments at the same time, and delegating his church duties in the Millstreet area to a poorly-paid curate. When he died, the parish was virtually inherited by his son, Canon John Hoare, who probably lived in Limerick until 1803, when he became Chancellor of Saint Mary’s Cathedral, Limerick.

While John Hoare was the Vicar of Drishane, the Wallis family built a new church for the parish. The town of Millstreet was developing an expanding to the west of Drishane, expanding around a new and lengthy main street that offered easier access to the mills that give the new town its name.

The Wallis family built the new church on a prominent hill above the town, and the church may have been named Saint Anna’s in the mistaken belief that the name Drishane was linked to Saint Anne.

John Hoare was succeeded as Vicar of Drishane in 1804 by Canon William Maunsell, who lived in Millstreet, unlike many of his predecessors. While he was vicar, the church was enlarged between 1807 and 1814 and the tower and belfry were built during this time. The church building covered an area of about 1,500 sq ft, and had seating for about 70 to 80 people.

Maunsell became Archdeacon of Limerick in 1814, and he was succeeded in 1815 by his brother-in-law, Charles Warburton, a son of Bishop William Warburton of Limerick. Howeverf, Warburton was also a pluralist, and he lived in Rathkeale, Co Limerick, where he was one of my predecessors as rector. He was also Chancellor of Limerick and Archdeacon of Tuam at the same time.

When Warburton resigned from Drishane in 1820, he was succeeded in Drishane by his first cousin, John Charles Mongan. He was ordained before he reached the canonical age, although this probably provided no obstacle for his uncle the bishop.

A Church report in 1835 said the average attendance at the Church on Sundays was about 60. But Mongan was a particularly negligent Vicar of Drishane, even though he married Elizabeth Wallis, a daughter of John Wallis of Drishane Castle, and left much of the work in the parish to his curate, the Revd Francis Young.

Mongan seems to have spent most of his clerical career in Belize, then British Honduras, where he had secured a post as chaplain, and he died there in 1860.

In the decades that followed, Church services were held with less frequency in Saint Anna’s. The last regular church service in Saint Anna’s was held in the 1930s, and the church was officially closed for public worship on 16 November 1958. The main part of the church building was demolished the following year, and the tower was all that was left standing.

The four-stage, square tower, built ca 1810, is the all that survives of the former parish church. It has carved stone pinnacles to the corners, rubble sandstone walls with carved limestone string courses dividing the stages, and cut sandstone voussoirs, with cut-stone sills to some openings.

The ground stage of the tower has a segmental arched blind doorway to the east and a round arched doorway to the north with dressed limestone voussoirs and a sheet metal door.

In 1994-1995, the Millstreet Tidy Town Association, with support from FÁS and Cork County Council, began restoring the church tower and the surrounding graveyard, and recording its history. Saint Anna’s Amenity Park was officially opened by Bishop Roy Warke, Bishop of Cork, Cloyne and Ross, on 4 May 1997. This restoration project has enhanced the image of the town and preserved an important part of its ecclesiastical, social and architectural history and heritage.