A cathedral day by the living water

”I heard the voice of Jesus say, ‘Behold I freely give the living water, thirsty one, Stoop down, and drink, and live’ ... sunshine on the River Liffey this afternoon (Photograph: Patrick Comerford, 2011)

Today was a cathedral day. In the morning, I was in my chapter stall in Christ Church Cathedral for the Cathedral Eucharist, at which the celebrant was the Dean, the Very Revd Dermot Dunne; in the afternoon, I was back again for the Enthronement of the Most Revd Dr Michael Jackson as Archbishop of Dublin.

After their Easter break, the choir was back in the cathedral this morning, and performed beautifully. The setting for the Cathedral Eucharist was The Mass in G minor by Ralph Vaughan Williams (1872-1958).

This choral setting, written by Vaughan Williams in 1920-1921, is notable as the first Mass written in a distinctly English manner since the 16th century and the time of Byrd and Tallis. This Mass is one of the great glories of the English choral repertory. In this work, the composer pays homage to the traditions of Tudor church music, but at the same time he remains distinctively 20th century.

The Mass is one of three contemplative and other-worldly scores written by Vaughan Williams immediately after his service in World War I as an ambulance driver in France. The other two are: A Pastoral Symphony (Symphony No 3) and his one-act opera, The Shepherds of the Delectable Mountains. The musical link between this Mass and his pastoral works cannon be missed – the whole work is full of the rich harmonies associated with Vaughan Williams in his most “English summertime” moments.

But this Mass also has origins – as does Herbert Howells (1892-1983) in his Requiem – in the revival of English polyphony and with the identification y Vaughan Williams of his music with “the imperishable glories of English prose.”

Vaughan Williams dedicated this Mass to Gustav Holst and the Whitsuntide Singers at Thaxted in Essex, 30 km from Cambridge, ¬¬where the radical Conrad Noel (1869-1942) was the vicar. At the time, Vaughan Williams and Holst were close friends, and Holst worked on The Planets while he was staying in Thaxted.

Tthe composer intended the Mass to be used in a liturgical setting. However, this morning’s Mass was first performed not in Conrad Noel’s church in Thaxted, but in a concert venue by the City of Birmingham Choir on 6 December 1922. Its first liturgical performance came three months later on 12 March 1923 in Westminster Cathedral, with the choir directed by Dr Richard Runciman Terry, who was a seminal figure in the revival of interest in England’s Tudor composers and had taken an instant liking to the work.

The success of the Mass in G minor as a liturgical work in post-war Britain, according to Barry Creasy, chairman of Collegium Musicum, London, is best summed up in Terry’s own words to Vaughan Williams: “I’m quite sincere when I say that it is the work one has all along been waiting for. In your individual and modern idiom you have really captured the old liturgical spirit and atmosphere.” Indeed, Terry and Holst had championed its liturgical use.

The Mass in G Minor could be seen as the choral equivalent of Vaughan Williams’s Fantasia on a Theme by Thomas Tallis, written for double string orchestra and solo quartet, in its aural evocation of archaic modes, expressed in thoroughly modern ways.

The Mass in G minor was written for an unaccompanied double choir and four soloists, and it is divided into five movements: Kyrie, Gloria, Credo, Sanctus, and Agnus Dei.

The Kyrie’s swaying, five-note theme, sung by the altos, is the basis from which the serene counter-point grows as the chorus enters voice by voice. The middle Christe eleison, sung by the solo quartet, is dark and supplicative. The return of the Kyrie brings back the modal five-note motif and concludes quietly.

We said the Nicene Creed this morning, and so did not hear Vaughan William’s setting of the Credo. However, this is the dramatic centre of the Mass. Its narration of Christ’s passion, coupled with the confession of the articles of faith, elicit an almost oratorio-like response from the composer.

At all times, Vaughan Williams shows attuned sensitivity to the text: the vigorous canon of “Patrem omnipotentum,” the hushed devotion way in which the incarnation and crucifixion are described, the triumphant return of the opening canon’s melody at “Et resurrexit,” and the measured chordal treatment, led by the solo quartet, of the recitation of the articles of faith bring a rare sense of drama to the text. Perhaps we may hear it another Sunday morning.

The Sanctus and Benedictus are brief and effective. Divided sopranos suggest the swaying of censers as they intone the triple Sanctus. At “Pleni sunt coeli et terra,” an airy fugue evokes the image of cherubim dancing attendance on God in the heavens. The solo quartet meditates with contrapuntal devotion on the text of the Benedictus, while the double chorus responds with forthright, antiphonal Hosannas.

The dark, even despairing Agnus Dei brings the Mass to full circle. Here, the prayer for peace, “Dona nobis pacem,” reprises the five-note theme of the prayer for mercy that opens the work at “Kyrie eleison.”

If I could choose a setting for my funeral, then this must be it. But I’m not planning that, and I hope it is many, many decades away. I would certainly love to hear a recording of this Mass in G mior by the Choir of Christ Church Cathedral.

We had more Vaughan Williams this morning when we sang as the Offertory Hymn I heard the voice of Jesus say, with the tune Kingsfold, adapted from an English folk tune by Vaughan Williams.

Kingsfold has been judged one of the most important folk tunes that Vaughan Williams harmonised. The melody was originally known as The Red Barn or The Murder of Maria Martin, telling the story of a murder and trial in Sussex in 1827. The tune was collected by Vaughan Williams at the Wheatsheaf Inn in the hamlet of Kingsfold in West Sussex. He harmonised the melody, renamed it Kingsfold, and published it in The English Hymnal, which he co-edited with Percy Dearmer, to accompany Horatio Bonar’s hymn.

Sitting to lunch in Mick Wallace’s Taverna in the Italian Quarter by the banks of the River Liffey, the second verse of that hymn came to mind:

I heard the voice of Jesus say,
‘Behold I freely give
The living water, thirsty one,
Stoop down, and drink, and live.’
I came to Jesus, and I drank
Of that life-giving stream;
My thirst was quenched, my soul revived,
And now I live in him. 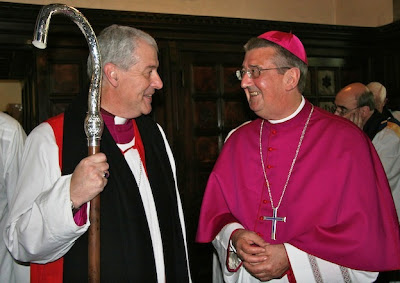 After lunch, I crossed back over the river and strolled around the second-hand book stalls in Temple Bar, before returning to the cathedral this afternoon for the enthronement of the new archbishop. And there was some Herbert Howells this afternoon too, when the choir sang Te Deum, which he wrote along with Jubilate Deo for his Collegium Regale for King’s College, Cambridge, in 1944.

However, the most popular contribution from the choir this afternoon may have been the Post-Gospel Hallelujah Chorus from Handel’s Messiah, between the Gospel (John 20: 1-18), read by Archbishop Diarmuid Martin, and the sermon, preached by Archbishop Jackson.

“Priorities keep changing,” Archbishop Jackson said in his sermon. “Yet the public role of religions remains one of opening up pathways to God for those who find it difficult to make such a journey for themselves; of opening up dialogue with those who make decisions which affect all segments of society; and, most of all, of opening up and maintaining relationships with people, whoever they and we are. This holds for every Faith represented here this afternoon. It is the role of people of faith to think and to act in hope. The invitation which I have received to be the Church of Ireland archbishop of Dublin places me along with all of you at the heartbeat of one of Europe’s most fast-moving capital cities.

“Within little more than a decade it is reckoned that over half of the world’s population will live in an urban environment. Cities bring an almost limitless choice for those who can make choices. And choice always brings the demand for responsibility –whether it be in finance, politics, education or healthcare. However, cities, as well we know, also tend to confine choice-making in the hands of fewer and fewer people. So, advocacy of those who have no voice is an important job of work for people of Faith in an urban environment. A sense of personal alienation and loneliness is another widespread feature of urban life. The sheer magnitude and pace of the everyday, the cluster of agendas which together make up a decision, along with the scope for corruption and bad faith, pushes to one side people who find themselves devoid of voice or influence. Here again, people of Faith have a strategic role to play, one of challenge and consistency combined, both within their own traditions and across the traditions of all together. It is surely a moment of hope that the Ministry of Healing is one of the works of God which is being developed actively in this cathedral church. This will redefine its community, as the doors of this place open wider and wider through such witness of generosity in the name and the work of Christ.”

Canon Patrick Comerford is Director of Spiritual Formation at the Church of Ireland Theological Institute and a canon of Christ Church Cathedral, Dublin