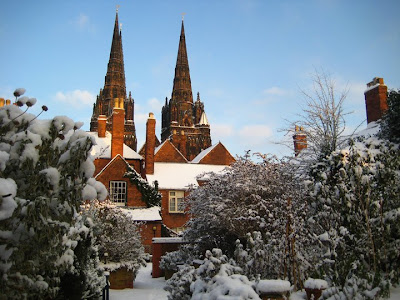 Snow on snow … Lichfield Cathedral seen last Chrtistmas from the gardens of Darwin House by Michael Fabricant, MP for Lichfield

My choice of Christmas poem this morning is the poem that Samuel Johnson translated as Messiah. The original poem was written by Alexander Pope (1688-1744), and I first heard of the poem and its translation in Johnson’s own home city, Lichfield.

As an undergraduate at Pembroke College, Oxford, Samuel Johnson was asked by his tutor to produce a Latin translation of Pope’s Messiah as a Christmas exercise in 1728. This was 13 years before Handel composed his Messiah in 1741, and 14 years before its first performance, in Dublin in 1742. So Pope and Johnson were orihinal in their choice of title for this work.

Johnson completed half of the translation in one afternoon and the rest the following morning. The poem was finished quickly because Johnson was hoping for patronage that would help him overcome the financial difficulties he was suffering as an undergraduate at Pembroke.

After Johnson finished the poem, it was sent to his home in Lichfield, where his father Michael Johnson, a bookseller, immediately printed the work. Michael Johnson had already published the translation before Samuel Johnson ever sent a copy to Alexander Pope. It is said Johnson become “very angry” and said “if it had not been his Father [who had done this] he would have cut his throat.”

Samuel Johnson’s birthplace in Breadmarket Street, now the Samuel Johnson Birthplace Museum ... Johnson was born here in 1709, and his father ran a bookshop from the house (Photograph: Patrick Comerford

The poem later appeared in a Miscellany of Poems (1731), edited by John Husbands, a Pembroke tutor, and this is the earliest surviving publication of any of Johnson’s writings. Husbands’s Miscellany has a list of subscribers, including half of the enrolled students at Pembroke.

Johnson’s translation was first was brought to Pope’s attention by Charles Arbuthnot, the son of Pope’s friend John Arbuthnot. According to Sir John Hawkins, Pope praised the work when he claimed that he could not tell if it was “the original” or not. But, while the poem brought praise to Johnson, it never brought him the material benefit he hoped for.

Pope’s Messiah deals with Virgil’s Fourth Ecologue, which was said to predict the birth of Christ. The poem merges the prophecy of Isaiah about the Messiah, with wording that echoes Virgil. Johnson’s translation into Latin relies on Virgil directly and incorporates more of the Eclogue’s language.

Ye nymphs of Solyma! begin the song:
To heavenly themes sublimer strains belong.
The mossy fountains and the sylvan shades,
The dreams of Pindus and th’ Aonian maids,
Delight no more – O thou my voice inspire
Who touched Isaiah’s hallowed lips with fire!
Rapt into future times, the bard begun:
A Virgin shall conceive, a Virgin bear a Son!
From Jesse’s root behold a branch arise,
Whose sacred flower with fragrance fills the skies:
Th’ ethereal spirit o’er its leaves shall move,
And on its top descends the mystic Dove.
Ye Heavens! from high the dewy nectar pour,
And in soft silence shed the kindly shower!
The sick and weak the healing plant shall aid,
From storm a shelter, and from heat a shade.
All crimes shall cease, and ancient frauds shall fail;
Returning Justice lift aloft her scale;
Peace o’er the world her olive wand extend,
And white-robed Innocence from Heaven descend.
Swift fly the years, and rise th’ expected morn!
Oh spring to light, auspicious Babe, be born!
See, Nature hastes her earliest wreaths to bring,
With all the incense of the breathing spring:
See lofty Lebanon his head advance,
See nodding forests on the mountains dance:
See spicy clouds from lowly Saron rise,
And Carmel’s flowery top perfumes the skies!
Hark! a glad voice the lonely desert cheers:
Prepare the way! a God, a God appears!
A God, a God! the vocal hills reply,
The rocks proclaim th’ approaching Deity.
Lo, Earth receives him from the bending skies!
Sink down, ye mountains! and ye valleys, rise!
With heads declined, ye cedars, homage pay!
Be smooth, ye rocks! ye rapid floods, give way!
The Saviour comes! by ancient bards foretold:
Hear him, ye deaf! and all ye blind, behold!
He from thick films shall purge the visual ray,
And on the sightless eyeball pour the day:
’Tis he th’ obstructed paths of sound shall clear
And bid new music charm th’ unfolding ear:
The dumb shall sing, the lame his crutch forego,
And leap exulting like the bounding roe.
No sigh, no murmur, the wide world shall hear.
From every face he wipes off every tear.
In adamantine chains shall Death be bound.
And Hell's grim tyrant feel th’ eternal wound.
As the good shepherd tends his fleecy care,
Seeks freshest pasture, and the purest air,
Explores the lost, the wandering sheep directs,
By day o’ersees them, and by night protects;
The tender lambs he raises in his arms,
Feeds from his hand, and in his bosom warms:
Thus shall mankind his guardian care engage,
The promised Father of the future age.
No more shall nation against nation rise,
Nor ardent warriors meet with hateful eyes,
Nor fields with gleaming steel be covered o’er,
The brazen trumpets kindle rage no more;
But useless lances into scythes shall bend,
And the broad falchion in a ploughshare end.
Then palaces shall rise; the joyful son
Shall finish what his short-lived sire begun;
Their vines a shadow to their race shall yield.
And the same hand that sowed, shall reap the field.
The swain in barren deserts with surprise
Sees lilies spring, and sudden verdure rise;
And starts, amidst the thirsty wilds, to hear
New falls of water murmuring in his ear.
On rifted rocks, the dragon’s late abodes,
The green reed trembles, and the bulrush nods.
Waste sandy valleys, once perplexed with thorn,
The spiry fir and shapely box adorn:
To leafless shrubs the flowery palms succeed,
And odorous myrtle to the noisome weed.
The lambs with wolves shall graze the verdant mead
And boys in flowery bands the tiger lead:
The steer and lion at one crib shall meet,
And harmless serpents lick the pilgrim’s feet.
The smiling infant in his hand shall take
The crested basilisk and speckled snake,
Pleased, the green lustre of the scales survey,
And with their forky tongue shall innocently play.
Rise, crowned with light, imperial Salem, rise!
Exalt thy towery head, and lift thy eyes!
See a long race thy spacious courts adorn:
See future sons and daughters yet unborn,
In crowding ranks on every side arise,
Demanding life, impatient for the skies!
See barbarous nations at thy gates attend,
Walk in thy light, and in thy temple bend!
See thy bright altars thronged with prostrate kings,
And heaped with products of Sabean springs!
For thee Idumè’s spicy forests blow,
And seeds of gold in Ophir’s mountains glow.
See Heaven his sparkling portals wide display,
And break upon thee in a flood of day!
No more the rising Sun shall gild the morn,
Nor evening Cynthia fill her silver horn;
But lost, dissolved in thy superior rays,
One tide of glory, one unclouded blaze
O’erflow thy courts: the Light himself shall shine
Revealed, and God’s eternal day be thine!
The seas shall waste, the skies in smoke decay,
Rocks fall to dust, and mountains melt away!
But fixed his word, his saving power remains;
Thy realm for ever lasts, thy own Messiah reigns!

And what about Christmas this year in Samuel Johnson’s own Lichfield?

For the first time, the Christmas morning Eucharist in Lichfield Cathedral is to be broadcast live on BBC1 and the Cathedral is welcoming viewers to join this celebration of the Eucharist on 25 December. For weeks now, the cathedral community, including the cathedral staff and volunteers, have been working closely with the BBC to ensure that the day is a poignant, memorable and well-organised one.

From tomorrow [21 December 2011] until Saint Stephen’s Day [Monday, 26 December], the south door will be used by the BBC engineers and the community is asked to use the North West and North Transept doors during this time.

Meanwhile, the popular Candlelit Tours at Lichfield Cathedral resume next month [January 2012] as part of the winter programme. A candlelit tour includes a guided tour by an experienced cathedral guide, followed by mulled fruit punch and mince pies afterwards in the mediaeval beamed Old Stables, now the centre for cathedral visitors. The next tours are on 9, 10, 11 and 31 January, and tickets are priced at £12.50.