Looking towards Tarbert and the mouth of the River Shannon from the shoreline below Hamilton’s Tower in Glin (Photograph: Patrick Comerford, 2017; click on image for full-screen resolution)

After a busy working week, including three days in Limerick at the General Synod of the Church of Ireland, two of us went for long walks along the banks of the Shannon Estuary, first near Pallaskenry at sunset on Saturday evening, and again in Glin at lunchtime on Sunday afternoon, after the Sunday services in Saint Mary’s Church, Askeaton, and in Saint Brendan’s Church, Kilnaughtin (Tarbert), Co Kerry.

On Saturday evening, as the sun was setting, we drove from Kildimo, through areas with beautiful names Paradise, to the banks of the Shannon and slipway at the pier and the quay at Ringmoylan.

This is also a popular area for birdwatchers, but on Saturday evening it was still and quiet. The early summer sunshine was dimming in the distance, but the estuary waters were calm, and we could see Shannon Airport clearly on the opposite side of the estuary.

Friends has been staying n the Rectory in Askeaton during the Synod, and the synod itself had been three busy days, with the opening Eucharist in Saint Mary’s Cathedral, Limerick, and two contributions to the synod debates, one on Friday morning alongside David Breen, introducing the work of the Rathkeale Pre-Cohesion Social Group, and one on Saturday during the debate on Ordained Local Ministry.

On Sunday, as we returned from Tarbert to Askeaton, we stopped in Glin, and went for a walk along the estuary shoreline below Hamilton’s Tower, a folly built almost 200 years ago by John Hamilton Esq around 1820.

Because of its prominent, elevated position, this tower dominates the countryside for many miles. Local tradition says there were cannons on top of the tower at one time, and that Captain Hamilton fired a cannon in salute as navy ships passed up and down the River Shannon.

In reality, the original function of the tower was to serve as a picturesque eye-catcher from Glin Castle. There were no cannon shots, and the river was calm and peaceful on Sunday afternoon as we walked along the shore beneath the tower. The only shipping in sight was the ferry in the distance crossing between Tarbert on the Kerry side of the estuary, and Killimer on the Clare side. 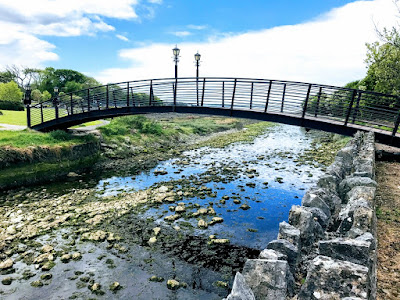 We crossed the River Corbry separating the promontory from Glin on the Centenary Bridge, a footbridge opened last year on 28 April 2016 as part of the 1916 centenary commemorations.

The Centenary Bridge in the Town Park honours everyone from Glin who was involved in the events surrounding the Easter Rising in 1916, especially Constable James O’Brien, Eamonn Dore and Michael O’Connor.

James O’Brien, an unarmed policeman, was the first person killed in the 1916 Rising in Dublin. He was born in Ballybeg, Kilfergus, Glin, and joined the Dublin Metropolitan Police in 1895. On Easter Monday, 24 April 1916, he was shot and killed by Seán Connolly, leader of a group from the Irish Citizens’ Army, who had come from Liberty Hall to seize Dublin Castle.

Seán Connolly was shot about an hour later by an army sniper, and is believed to be the first of the rebels to have died in 1916.

Eamonn Dore was born at Main Street, Glin, in 1886, and was a young medical student in Dublin when he became caught up in events. He was a courier for Sean MacDermott, one of the signatories of the 1916 Proclamation, and fought in the GPO during Easter Week 1916 alongside Padraic Pearse, James Connolly and Tom Clarke.

Following the Rising, he was detained until January 1917. He later married Nora Daly, sister of Ned Daly and sister-in-law of Tom Clarke, both executed for their part in the Rising. He died in 1973.

Michael O’Connor, a teacher from Ballyhahill, was an innocent victim of the Rising when he was caught in crossfire near the Phoenix Park, Dublin, as he tried to help a girl take cover from the gunfire. He is buried in Kilfergus Cemetery, beside Constable O’Brien.

Nearby in the park, there are reminders of two other sad events in life of Glin. A memorial recalls the 11 people who drowned off Knockeranna Point when The Mermaid, a turfboat owned by a local merchant, Thomas McCoy, carrying a cargo of corn and butter to Limerick, foundered in a strong gale on 21 November 1847.

The second, discreet monument is inscribed:

‘Thousands of victims of industrial schools bear witness to a society unwilling to question its own comfortable certainties out of a fear that those beliefs might turn out to have been built on sand.’ Mary Raftery.

The congregation is deeply sorry for the hurt we have caused. Br Philip Pinto. Congregation Leader.

Early on Sunday afternoon, the low tide had reduced the River Corby to little more than a brook, with children climbing the bridge and wading in the water. Summer has come, and hopefully peace has come to this island too, in more ways than we can count.

On the banks of the River Shannon at Ringmoylan on Saturday evening (Photographs: Patrick Comerford, 2017; click on images for full-screen resolution)