The Church of Ireland Gazette in today’s edition [30 September 2011] carries the following photograph and half-page report on page 6: 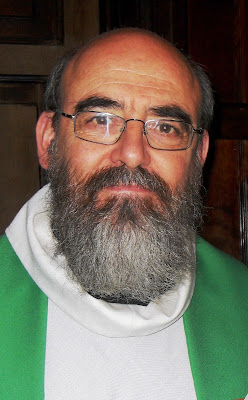 Canon Patrick Comerford, lecturer in Anglicanism and Liturgy at the Church of Ireland Theological Institute in Dublin, has taken to task Northern Ireland’s Deputy First Minister and Sinn Féin candidate in the forthcoming election for President of Ireland, Martin McGuinness, over Mr McGuinness’s recent blaming of “West Brit elements” in the Dublin media for daring to ask questions about his Provisional IRA past.

The outspoken theologian goes on to declare that if there is “no place in Martin McGuinness’s ugly new Ireland, for ‘West Brits’, the ‘Anglo-Irish’, those who speak Received Pronunciation English, those who enjoy cricket and rugby, those whose parents were born in Rathmines and Rathgar, those whose father or grandfather fought in the British Army in World War I or World War II, those who wear a poppy, those who received part of our education in England or worked there for a while, those who are proud of that part of our ancestry that is English (even if generations ago), or those who oppose 40 years of murderous violence on this island, then I hope his canvassers decide not to knock at my door during their electioneering.

Canon Comerford says he would like an apology, but adds that Mr McGuinness has “too many other and more obvious acts of violence and intimidation to apologise for.”
Posted by Patrick Comerford at 07:30 1 comment:

Email ThisBlogThis!Share to TwitterShare to FacebookShare to Pinterest
Labels: Church of Ireland Gazette, Theology and Culture, War and peace

The Church of Ireland Gazette in today’s edition [30 September 2011] carries the following photograph and half-page report on page 3: 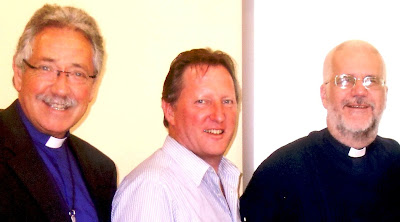 “We are responding to a changed society, our global neighbours are now our local neighbours, and if we fail to communicate there will be inevitable difficulties and trouble,” the Bishop of Limerick and Killaloe, the Rt Revd Trevor Williams, told a recent conference on interfaith dialogue held in the Church of Ireland Theological Institute, Dublin.

Bishop Williams said the “changed world we live in” was reflected in dialogue becoming part of the work and title of the Church of Ireland Commission for Christian Unity and Dialogue and he hoped each Diocese would appoint an interfaith co-ordinator.

The Revd Dr Keith Scott of Rathkeale, Diocese of Limerick, who co-ordinated the conference, said the area of interfaith relations was still a new and uncertain one and people had to “explore today what is crucial to the future.”

He added that the way of openness is one of vulnerability and service and described building peace as being “crucial to our long-term futures.”

The principal speaker at the conference was Dr Phil Lewis of the University of Bradford, who is the Bishop of Bradford’s adviser on interfaith affairs.

Speaking on ‘Building interfaith and intercultural relations in urban Britain’, Dr Lewis – who has worked in a Muslim-Christian studies centre in Rawalpindi, Pakistan, and is a former CMS mission partner – believed that the Churches in Ireland needed to think in a long-term way by looking at the next ten years, adding: “Now is the time to work at developing relationships; you can’t develop them in the middle of a crisis.”

He went on to warn of the danger of looking at Muslim communities through a narrow security lens, “post 9/11 or post 7/7,” saying that the same had once happened to the Irish community in Britain.

Dr Lewis identified the danger of the extremes of ‘Islamophobia’ and ‘Islamophilia’, where all Muslims are seen as “bin Laden look-alikes” or Islam was romanticised as being all about peace. People had to walk a path between demonising and sentimentalising, he said.

The conference also heard contributions on a number of aspects of interfaith dialogue and relations from Garda Sergeant David McInerney, of the Garda Racial, Intercultural and Diversity Office; Fr Alan Hilliard, Roman Catholic chaplain in the Dublin Institute of Technology; and Abed Adalkar, Integration and Intercultural Officer with Doras Luimní.

At the end of the conference, the Archbishop of Dublin, the Most Revd Dr Michael Jackson, said that people lived today in a context of living history that was complex, fluid and toxic. People needed to develop respect for others, enabling others to respect one another, he said, adding: “In Ireland, we suffer more from religious indigestion than religious hunger.”
Posted by Patrick Comerford at 06:00 No comments: