Reporting on the Eucharistic Congress 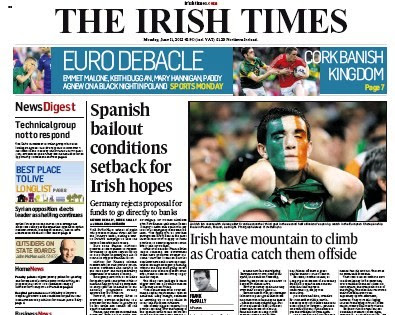 The reports in The Irish Times this morning [11 June 201] on the opening of the Eucharistic Congress include an account of my sermon yesterday at the Ecumenical Service at Saint Colmcille’s Well in Ballycullen.

The following report is published on page 6:

Pope’s address to be shown at Croke Park

Pope Benedict XVI will not now be making a live broadcast to the Eucharistic Congress in Dublin next Sunday, as had been expected. A pre-recorded message from him will be shown at the closing Mass in Croke Park instead.

Congress general secretary Fr Kevin Doran said yesterday that weather factors influenced the decision to pre-record the message, although it had never been confirmed that a papal broadcast would be “live”.

He said numbers attending the congress were expected to increase as the week progressed, with a full house in Croke Park next Sunday. Tickets remain available for all congress events.

At a press conference at the RDS yesterday, Archbishop of Dublin Dr Diarmuid Martin said there was an awareness among the estimated 7,000 pilgrims from abroad attending the congress “that the Irish church has been through difficult times”.

There was “a desire to ensure that the church in Ireland would be a different church, that it would return to the central message, to the gospels and in particular to the Eucharist,” he said.

Clerical child abuse was “a travesty of what the gospel is about”, he said. People attending from abroad were there to show “solidarity with the Irish church” and they also had “great affection and great respect for what the Irish church has done abroad”.

Also attending the congress were many “priests who have led exemplary lives and who are happy to be here to get new encouragement”, he said.

Of the congress in general, he said “we are not talking about 1932 [the last Eucharistic Congress in Dublin]”.

However, the numbers registered for this year’s congress “are higher than Quebec [where the 2008 congress took place] and they will probably grow as the week goes on”.

At an open-air Mass on the main street in Mullingar yesterday, held to mark the beginning of the International Eucharistic Congress, the Bishop of Meath Dr Michael Smith asked what impressions “will these visitors take with them when they leave Ireland” at the end of the week?

“They will find a country whose people have experienced the pain of meteoric economic growth turned to dust.

“They will find a church whose proud history has been tainted by scandal and sin.”

Yet “I trust they will also see that the words Christ spoke to Paul in Corinth ring true: ‘there are many on my side in this city’.”

He believed “the church today is a more humble community of faith because of the influence of the second Vatican Council”.

It “seeks, in spite of all the pain and sorrow, to witness to faith in Christ. It can never forget that it is a church of sinners placing its trust and hope in an all-loving and forgiving God.

“Because it is a gathering of sinners, the age-old challenge to the church – ecclesia semper reformanda (the church is ever in need of renewal and reform) – must always be present,” he said.

Among the speakers at the congress in Dublin today will be the Church of Ireland Archbishop of Dublin, Dr Michael Jackson.

At the annual ecumenical service yesterday at St Colmcille’s Well, Ballycullen Road, Co Dublin, Church of Ireland Canon Patrick Comerford remarked “how the atmosphere and culture surrounding Eucharistic Congresses have changed so much”.

“In 1932, the Eucharistic Congress left an impression for generations that many had a vision for an Ireland that was exclusively green, Gaelic and Catholic.”

Canon Comerford added: “If there is one Lord, one faith and one Baptism, then we are one, and any divisions we have are put there, not by Christ …

“They are put there by us … We have the duty and the responsibility to tear them down.”

Posted by Patrick Comerford at 11:31 No comments: