A 1,000-year-old oratory
on Inishmore is said to be
Europe’s smallest church 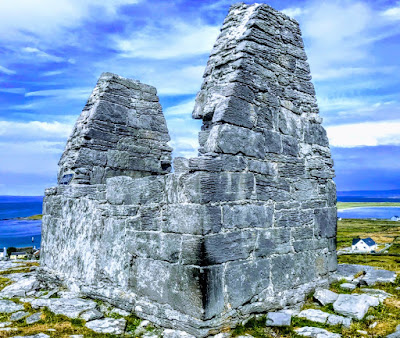 The Church of Saint Benan on Inishmore is said to be the smallest church in Europe (Photograph: Patrick Comerford, 2019)

I have been staying overnight on Inishmore, the largest of the Aran Islands, which is linked with many Irish saints: Saint Brendan was blessed for his voyage there, and the island also has links with Saint Enda, Saint Jarlath of Tuam, Saint Finnian of Clonard and Saint Columba, who called it the ‘Sun of the West.’

In the afternoon sunshine, as it was turning to evening yesterday [15 July 2017], two of us climbed the hill opposite Tigh Fitz in Killeany (Cill Éinne or Church of Enda) to Teampall Bheanain, or the little Church of Saint Benan.

This is said to be Europe’s smallest church, some tourism leaflets even claim this is the smallest church in the world. From there, there were panoramic views across both sides of the island, with Inishmaan and Inisheer to the south east and the Cliffs of Moher in Co Clare to the east.

Saint Benan of Inishmore is identified with Saint Benignus of Armagh, who died in 467. He was the son of Sesenen, a chieftain in the area now known as Co Meath. His family may have been part of the bardic tradition.

He was baptised by Saint Patrick, his name Benen was Latinised as Benignus and he became Saint Patrick’s favourite disciple.

He followed Saint Patrick in his travels and assisted him in his missionary labours, and was known as ‘Patrick’s psalm-singer.’ Saint Benignus is also said to have been secretary to the Commission of Nine, which had been directed to compile the Brehon Laws.

Saint Benignus is said to have contributed materials for the Psalter of Cashel, and the Book of Rights. He succeeded Saint Patrick’s nephew Sechnall as coadjutor and became the first rector of the Cathedral School of Armagh. It is said he became Saint Patrick’s coadjutor in Armagh around AD 450.

He is said to have been present at the synod that passed the canon found in the Book of Armagh recognising ‘the See Of the Apostle Peter’ as the final court of appeals in difficult cases. Saint Benignus resigned as coadjutor in 467 and died later that year. His feast is celebrated on 9 November.

In Co Cavan, he established a monastery on Drom Benen (Hill of Benan), today's Drumbannon. Anther monastery with his name was at Cill Benen (Church of Benan) in Kilbonane, West Cork. 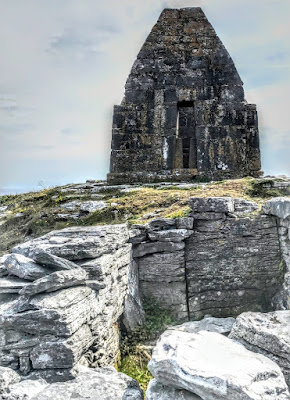 The Church of Saint Benan on Inishmore is may have been an oratory that was part of larger monastic settlement (Photograph: Patrick Comerford, 2019)

The oratory at Teampall Bheanáin (‘Benen’s House) outside Kilronan on Inishmore, is said to mark the location of the original monastic settlement founded by Saint Benen. The building dates from the 11th century, and has stood unaltered for 1,000 years.

However, this is not a conventional church in the sense of being a monastic or parish church. It was probably the tomb-shrine of the saint. This ensured its survival when material from the adjacent round tower and mediaeval monastery were purloined to fortify the now-ruined Arkin’s Castle, a Cromwellian fortress on the coast below the oratory.

The oratory stands on a high ridge that dominates the windward, south-east sea approach to the Kilronan, the main port of Inishmore, and, depending on the sunlight and time of day, it provides a striking silhouette against the skyline. 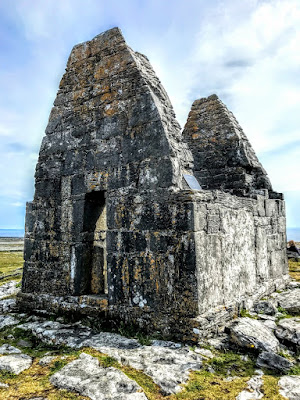 Saint Benan’s Church is built on a south/north axis, rather than the traditional east/west axis (Photograph: Patrick Comerford, 2019)

The church is built on a south/north axis, rather than the traditional east/west axis, probably to take advantage of the ridge on which it stands, and because this is a particularly exposed and windy site.

It is built of massive stone blocks, and one single slab forms half of one side. It is bonded by mortar and very careful fitting. The thick walls are pierced by a traveated, three-beam, narrow north doorway, with inclining jambs and a cut-away lintel. A small, single stone semi-circular window on one side looks out onto the mainland.

Nearby are the remains of a cashel wall, a dwelling structure, and a small beehive hut or clochán. 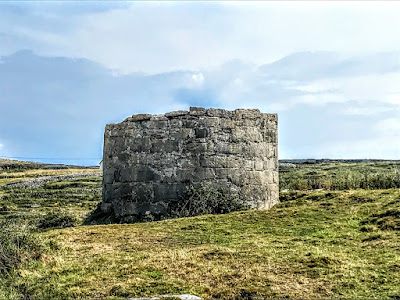 The stump of a round tower on the slopes beneath Saint Benan’s Church (Photograph: Patrick Comerford, 2019)

Downhill, below the church, are the remains of a monastery – the stump of a round tower and the remains of a Celtic cross – that was part of the large monastic village established by Saint Enda in the sixth century.

The views over Cill Éinne Bay are breath-taking, and it was interesting to see the number of people who had climbed up the ridge to this remote oratory and took the time to enjoy the views, spend time in reflection and, perhaps, even pray for a while. 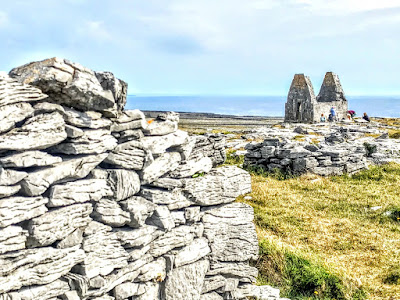 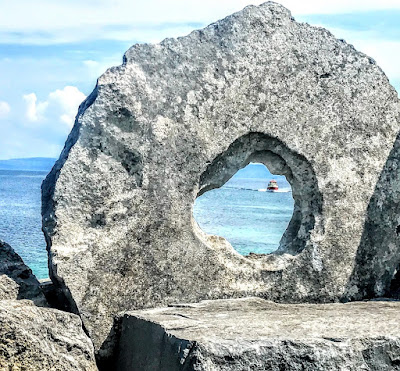 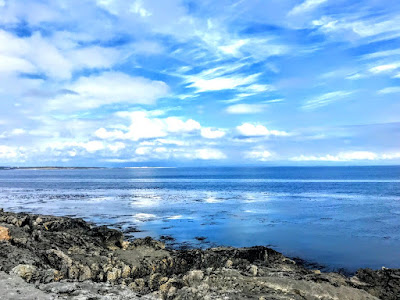 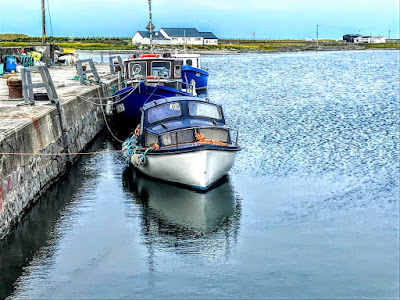 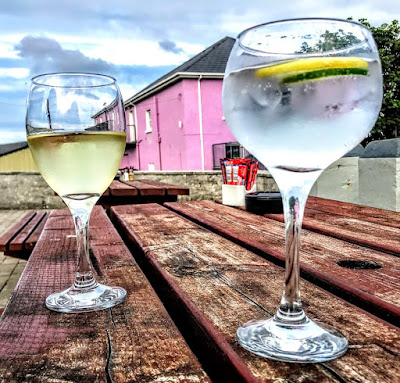