Sunset and evening shadows in Rosslare,
a morning of welcomes in Wexford parish 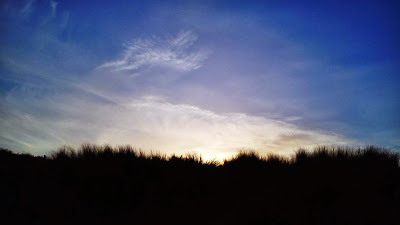 Seaside resorts have a particular beauty in winter. The beaches are usually abandoned, the sands are clean and unspoilt, the waves are higher, and the sunsets – although earlier in day – seem to linger longer, with sharper, clearer colours in the skies.

I spent the weekend in Wexford and Rosslare, enjoying long walks on the beach at Rosslare Strand, strolls through the narrow streets of Wexford town, and returning to Saint Iberius’s Church this morning.

I was staying at the Cedars Hotel in Rosslare Strand just for one night, and two of us travelled down from Dublin at lunchtime on Saturday on a journey that took just an hour and a half.

We had lunch in La Dolce Vita in Trimmer’s Lane, off North Main Street and close to the ruins of Selskar Abbey and the proud modern statue of Wexford’s greatest hurler, Nicky Rackard. Some years ago, one of Ireland’s leading restaurant critics wrote that he would eat the food out of the bin in La Dolce Vita.

We had a table by the window looking out at this tiny charming square. Roberto and Celine Pons have been in business at La Dolce Vita for about a dozen years, serving authentic Italian rustic food, great Italian wines and home-made Italian breads … yesterday I had the I had the Spaghettini aglio, olio e peperoncino (thin spaghetti with garlic, olive oil and chilli).

Strolling along the Quays in Wexford (Photograph: Patrick Comerford, 2014)

Later, I had a stroll along the Main Street, and ended up spending more time than I planned in the Book Centre. I was taken aback and flattered to find I had a half-page entry in The Wexford Book: Who’s What and Where’s Where edited by Michael Doyle, Michael Freeman and Philip Murphy, and published in November 2013 by County Books.

No-one had asked for my biographical details, but obviously my profile had been compiled by researchers who know me, and it is a flattering profile too. I suppose I had arrived in Wexford almost forty years after leaving it, and without ever even knowing it.

We are anxious to get to Rosslare while it was still bright enough to walk along the beach. But there was still a little time to walk down Anne Street for a walk along the Quays back to the car. 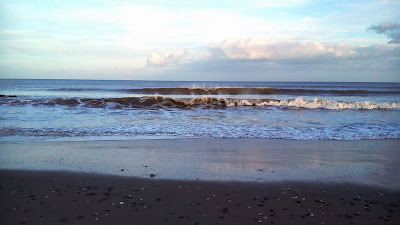 After checking in at the Cedars Hotel, In Rosslare, I wanted to find the small house I had rented in Rosslare for a few months in the mid-1970s before moving from the Wexford People to The Irish Times.
It took little effort to find the house, but like so many places in seaside resorts, it was closed up and seemed a little weary for the weather-battering it must have received in recent weeks.

A rented house that was home in Rosslare Strand shortly before I moved to Dublin in the mid-1970s (Photograph: Patrick Comerford, 2014)

The field behind, that had grazing cattle in the mid-1970s, was overgrown and abandoned, but we strolled through the damp undergrowth to the golf links that separate it from the sand dunes.

Even the golf course had been flooded in places after the recent heavy rains and high tides.

Down below, on the beach, the tide was just beginning to recede, but the waves were tall and heavy, and out further more and higher waves were breaking on the horizon. To the right, a ferry was pulling out of Rosslare Harbour. Behind the dunes, the sun was beginning to set. 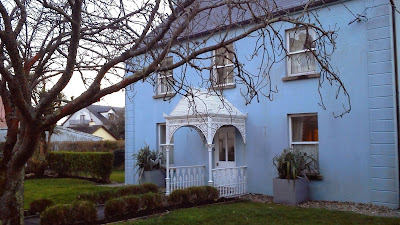 We strolled back through the resort, passing shuttered apartments and empty shops. Kelly’s Resort Hotel looked inviting, but most of the holiday homes were closed.

Rosslare cannot be dismissed easily as a brash resort. There are Victorian houses that once faced the beach painted in bright pastel colours and still retaining their wrought-iron porches.

Beside these houses, Marconi House is on a site that has a claim to a place in scientific history. Over 100 years ago, Gugliemo Marconi (1874-1936) – whose mother Annie Jameson was from Daphne Castle, near Enniscorthy, Co Wexford – established a wireless transmitting station here in 1901 to act as a link between Poldhu, Cornwall, and Clifden, Co Galway. He was investigating how to send signals across the Atlantic to compete with the transatlantic telegraph cables.

On 12 December 1901, he announced that a message transmitted by his company’s station in Cornwall had been received at Signal Hill in St John’s, Newfoundland. The distance between the two points was about 3,500 km and Marconi’s announcement was heralded as a great scientific advance. His station at Rosslare Strand closed down at the beginning of World War I in 1914, but a plaque outside Marconi House recalls this ground-breaking event.

Sunday morning in the Bull Ring in the heart of Wexford (Photograph: Patrick Comerford, 2014)

This morning, I woke to a bright sunrise, with the sun streaming into through the windows as it rose above Rosslare Harbour, and there was a clear view across the dunes to the sea. 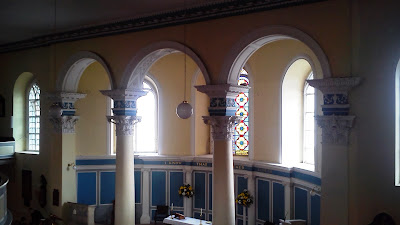 Later in the morning, there was a warm welcome at the Parish Eucharist in Saint Iberius’s Church on North Main Street. It is a few years since I either spoke or preached in this church, but both the church and the clergy retain many happy memories and it played an important part in my faith development in the 1970s.

Our opening hymn was Will your anchor hold in the storms of life? … and I thought of how this question must have faced many in the recent high waves and storms.

Later we sang Praise, my soul, the King of heaven, written by the Revd Henry Francis Lyte (1793-1847), once a curate in Taghmon, which is now part of Wexford Union of Parishes. 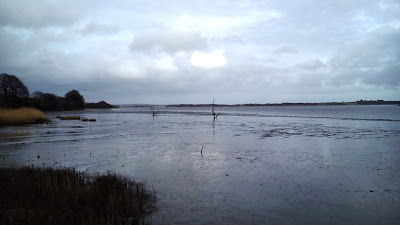 The Ferrycarrig Hotel stands on the banks of the Slaney, where the river spreads out into a broad estuary before entering Wexford Harbour (Photograph: Patrick Comerford, 2014)

After another stroll through the town, we had lunch in the Ferrycarrig Hotel. It stands on one of the most beautiful locations at a point where the River Slaney spreads out into a broad estuary before entering Wexford Harbour.

By the now the heavy rains had returned, and we headed north along the banks of the Slaney through Edermine, Enniscorthy, Scrawalsh and Bunclody. We drove on through Tullow, Baltinglass and Blessington. It was dark by the time we arrived back in Dublin this evening.

Posted by Patrick Comerford at 21:42 No comments: