A walking tour of the mission
‘colony’ and village in Dugort 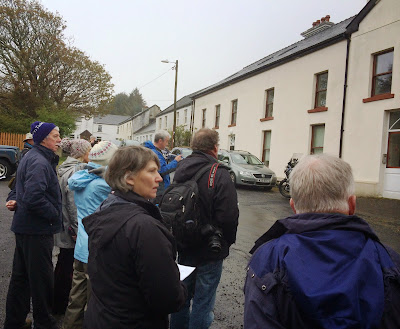 On Sunday morning, despite the intermittent rain, the archaeologist Eoin Halpin, of Archaeological Development Services, brought an enthusiastic group on a guided tour of the former mission “colony” village in Dugort and to the site of the abandoned or razed village of Finsheen as part of the programme for this year’s Heinrich Böll Memorial Weekend on Achill Island.

On Monday morning, before leaving Achill, I decided to retrace Eoin’s footsteps and to photograph and catalogue the buildings in Dugort.

The ‘colony,’ which was established in 1833 by the Revd Edward Nangle, may have been inspired by similar Moravian villages, such as the Moravian settlement at Gracehill, near Ballymena, Co Antrim.

Nangle was a major focus of the weekend programme, with papers by his direct descendant, Hilary Tullock, on the Nagle family and family pictures; the writer Patricia Byrne on women in the Achill Island mission; and by the film-maker and journalist Kevin Toolis on Nangle’s turbulent relationship with Archbishop John McHale.

The ‘colony’ at Dugort began with a long range of slated buildings facing south-east, with a school at one end and an infirmary, mill and dispensary at other end. In the centre was the hotel, a printing office and the residence of chief missionary. The lay-out of the mission, with its finely cultivated gardens, was meant to represent a civilising force in contrast to the neglected wildness of the island itself.

The ‘colony’ was built on 130 acres of land leased from the island’s landlord, Sir Richard O’Donnell, on the slopes of Achill’s highest mountain, Slievemore. Nangle moved permanently to the completed ‘colony’ in 1834, along with his wife Eliza, his family, and his most important supporters. The village included male and female schools, the minister’s house, a church, a hotel and a printing press. 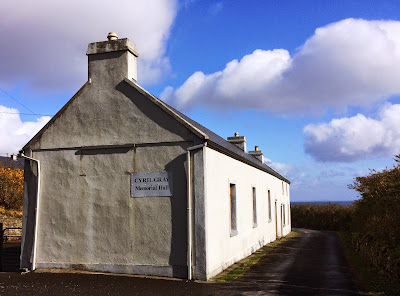 The Cyril Gray Hall … a former coastguard station on the northern fringes of the colony in Dugort (Photograph: Patrick Comerford, 2015)

The Cyril Gray Hall, which was the venue for much of the weekend’s programme, stands at the northern fringe of the original village, and once served as a Coastguard Station. 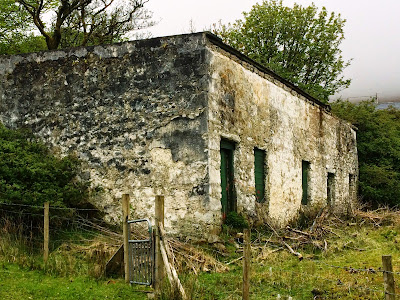 The ruins of a former corn mill (Photograph: Patrick Comerford, 2015)

Below it stand the ruins of a corn mill. 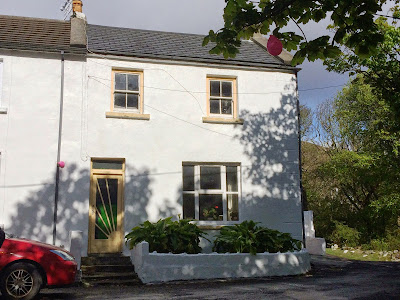 The first house on north-south range of buildings was not part of the original mission buildings (Photograph: Patrick Comerford, 2015)

According to Eoin, the first house on north-south range of buildings facing east was not part of the original range of mission buildings despite its appearances. 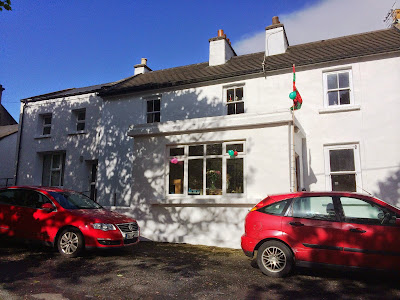 The two-storey house that was the home of Dr Neason Adams (Photograph: Patrick Comerford, 2015)

The next house was originally the first house in the colony village. This is a two-storey house that was home to Dr Neason Adams, the ‘colony’ doctor. Adams gave up a lucrative medical practice in Dublin to join Nangle on Achill. He looked after the sick and the poor of Achill for over 20 years without pay, and became known as the ‘Saint Luke’ of Achill.

Neason and Isabella Adams were admired and respected by everyone on the island because of their genuine humanity and idealism. 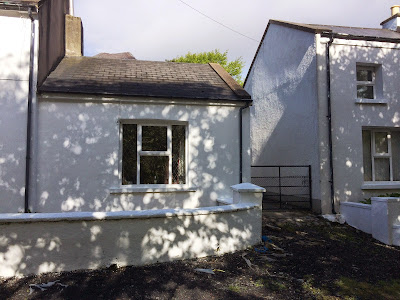 A single storey building on this site once housed the infant school (Photograph: Patrick Comerford, 2015)

Beside the Adams family home, a single storey house was an infant school run by Mrs Bozman, wife of the printer of the Achill Missionary Herald and Western Witness. Part of the cottage remains, but part of it has been altered 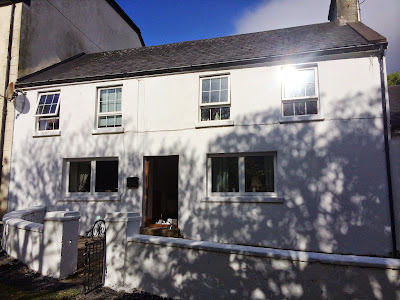 This two-storey house also served as the first church in Dugort until the 1850s (Photograph: Patrick Comerford, 2015)

From 1835, the next two-storey house was used as the original Saint Thomas’s Church, before the present church was built on the ridge opposite the village in the 1850s. It also housed the Scripture house, and was extended in 1845.

Beside the original church, a single-storey house was used as a schoolhouse from 1834. But this was later incorporated into the hotel next door. 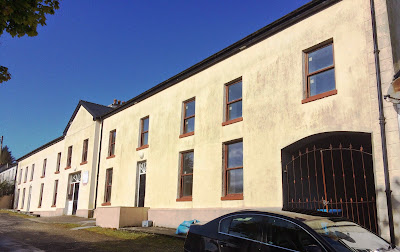 The Achill Mission Hotel, later the Slievemore Hotel, has been closed for some years (Photograph: Patrick Comerford, 2015)

In the centre of this range of buildings stands the two-storey hotel with an impressive central pediment. The hotel opened in 1845, and was run by Samuel Maynard from 1854. The Achill Mission Hotel made Dugort the original tourist destination on Achill Island.

In 1895, the Trustees of the Achill Mission Estate commissioned the architect George Palmer Beater (1850-1928) to prepare plans for enlarging the hotel “to meet the requirements of the tourist trade, which will be greatly increased by the new railway ... to the island.” The enlarged hotel was to have a 160 ft frontage with 20 additional bedrooms, dining room and sitting rooms.

Later it was renamed the Slievemore Hotel. It run by the Sherridan family for much of the 20th century, and then by the McNulty family until it closed some years ago. It has since been divided into private apartments, although peering inside the former hotel on Monday morning I could see the original grand staircase is still in place.

A single storey house beside the hotel was the rent office used by Carr, the mission bailiff. This has since been incorporated into the hotel building, and raised a storey in height 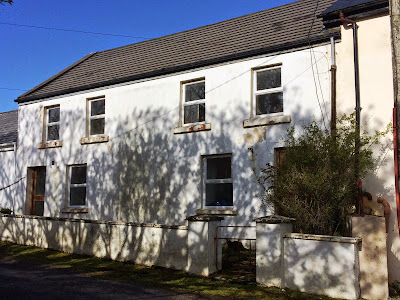 The two-storey home of Bozman the printer (Photograph: Patrick Comerford, 2015)

Next to this is a two-storey house which was home of Mr Bozman, printer of the Achill Missionary Herald and Western Witness. On the 1898 Ordnance Survey map it is marked as “Doogort Dispensary.” 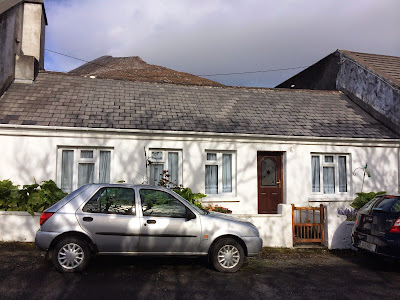 The single-storey building next to this was the print-house. Here the Achill Missionary Herald and Western Witness was printed from 1837. 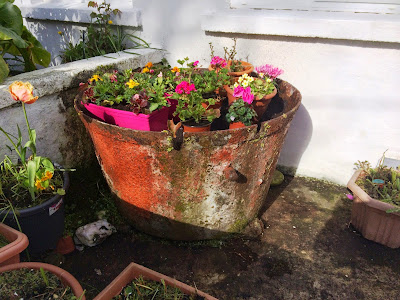 Was this planter used as a a cauldron during the Famine in the 1840s? (Photograph: Patrick Comerford, 2015)

In the small walled garden in front of the house, a circular metal planter is filled with flowers. But Eoin suggested that this had been used as a cauldron for cooking large supplies of food during the famine in the 1840s. 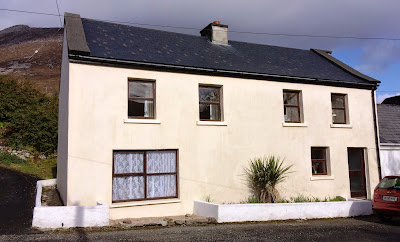 The former post office at the end of the western range of buildings (Photograph: Patrick Comerford, 2015)

The final two-storey house at the southern end of this terrace of houses was the post office from 1840, and was run by Henry McLoughlin.

Gray’s Guest House where I stayed last weekend … was this once Edward Nangle’s holiday home on Achill (Photograph: Patrick Comerford, 2015)

A second row of houses stands on the south side of the planned square in the ‘colony’ village, running from west to east.

The two-storey house at the western end of this range of houses has a central pediment with a landmark clock. From 1842, this was the Female Orphanage, and Eoin Halpin suggested this as one of the possible sites of Nangle’s holiday home on Achill after he moved to Skreen, Co Sligo.

By 1898, it was the Seaview Hotel, and today it is Gray’s Guesthouse, where I was staying once again last weekend. 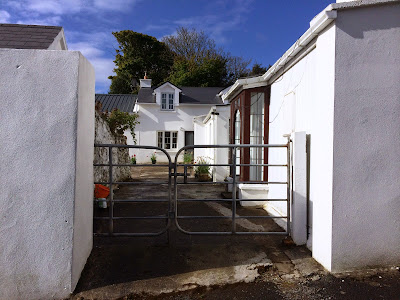 A gap in the buildings leads into the site of the former mission estate offices (Photograph: Patrick Comerford, 2015)

A gap in the building line marks where there was once an arch. The gap now leads into a number of houses and apartments associated with Gray’s. Here many of the mission estate offices once stood, and Eoin suggested that one of these might also be a contender for the location of Nangle’s later holiday home on the island. 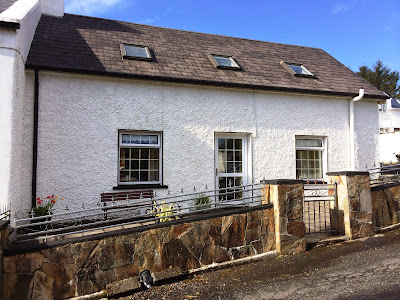 A single storey building was the home of Dr Laird, who married Catherine Young in the new Saint Thomas’s Church in 1855. 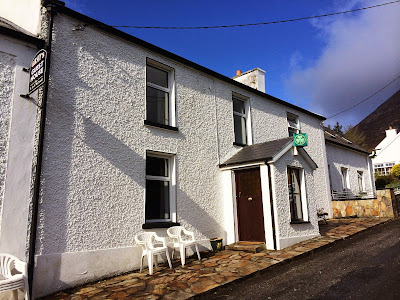 The home of BE Qodling, the coastguard office (Photograph: Patrick Comerford, 2015)

To the west of this house stand three similar two-storey houses. The first was the home a former naval office, BE Quolding, who was the Resident Inspecting Office of the Coast Guard on Achill Island. 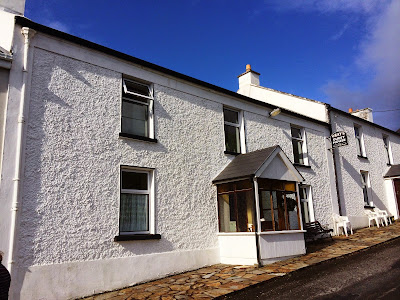 The middle of these three houses was the Coastguard Station. 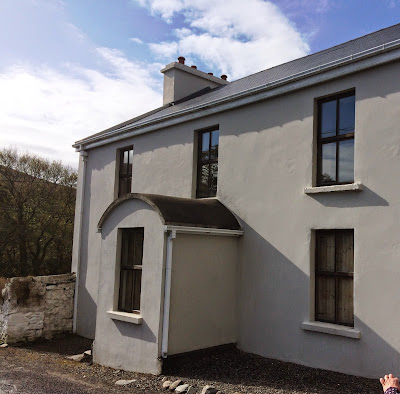 The former home of Murray Blacker, who leased over 4,000 from the mission estate (Photograph: Patrick Comerford, 2015)

The final, eastern-most house on this terrace was once the home of Captain Murray McGregor Blacker. In 1853, Murray Blacker, who had been farming in Norfolk, England, leased 4,071 acres at Keel West from the Achill Mission. In 1855 he subleased 2,000 acres of this land to Captain Charles Cunningham Boycott – they were related by marriage.

Boycott and Blacker were involved in a protracted dispute with Carr, the agent for the Achill Mission Estate, from whom McGregor Blacker had leased the lands, and Carr’s bailiff, O’Donnell. The dispute began when Boycott and Carr supported rival candidates in elections for the Board of Guardians in the Mission Estate area and Boycott’s candidates won.

Carr was also the local receiver of wrecks, which meant that he was entitled to collect the salvage from all shipwrecks in the area, and guard it until it was sold at a public auction. The local receiver had a right to a percentage of the sale and to keep whatever was not sold. In 1860, Carr wrote to the Official Receiver of Wrecks claiming Boycott and his men had illegally broken up a wreck and moved the salvage to Boycott’s property. In response, Boycott sued Carr for libel, claiming £500 in damages. 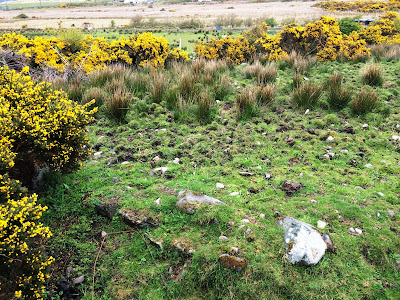 The remains of the houses in Finsheen, in a ridge beside Saint Thomas’s Church (Photograph: Patrick Comerford, 2015)

In 1872 Blacker moved to Virginia in the US, but he continued to own 5,665 acres in Co Mayo and 951 acres in Co Galway. The Blacker lands on Achill Island were sold to the Revd Warburton Welford in 1877, and Blacker’s house in Dugort later became the local police station.

From there we walked across to Saint Thomas’s Church, which Eoin told us stands on the site of the lost village of Finsheen. The village appears on the 1838 map, but disappears after that. Yet there is no record of evictions or protests, and he wondered whether the village’s residents had been peacefully relocated at some time in the 1840s.

Saint Thomas’s Church (1851-1852) was designed by Joseph Welland (1798-1860), the Architect to the Board of First Fruits and later to the Ecclesiastical Commissioners. There are signed plans in the Representative Church Body (RCB) Library for two different churches, a four-bay and a seven-bay building, dated 1851.

Welland’s son, Thomas James Welland (1830-1907), became Bishop of Down, Connor and Dromore. A later successor as bishop was John Frederick MacNeice, who was bishop from 1934 to 1942, and father of the poet Louis MacNeice.

On Saturday afternoon, in my paper on TS Eliot in the Cyril Gray Hall, I had discussed TS Eliot’s friendship with Louis MacNeice, and so my weekend had come a full circle.

Before I left, I went for a walk up to the pier built by the mission and then on the beach below the ‘colony’ in front of the Strand Hotel, which was also built by the Sherridan family. The tide was out, the sun was shining, the sand was a light golden-white in the sunshine, and the sea was a palate of colours – Mediterranean blue, Homer’s wine-red and Joyce’s snot-green. Achill was once again like an Aegean island in the sun. 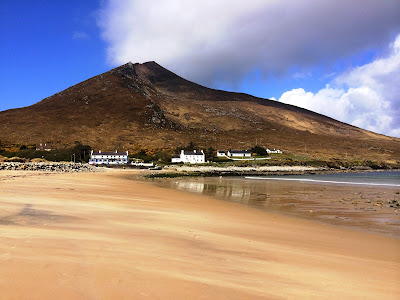 Walking on the beach at Dugort, below Slievemore, on Monday morning (Photograph: Patrick Comerford, 2015)