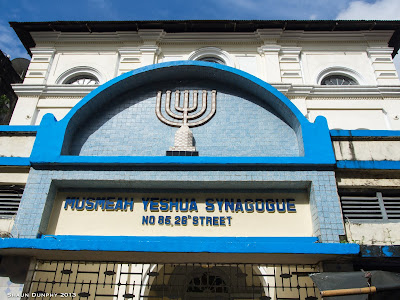 Before the present crisis created by the Corona Virus or Covid-19 pandemic cancelled all my travel plans, I had expected to be travelling from Dublin to Yangon in Myanmar this week on behalf of the Anglican mission agency USPG (United Society Partners in the Gospel).

I was booked on an Emirates flight from Dublin to Dubai overnight, arriving in Dubai Airport this morning [24 March 2020], and travelling on from Dubai with Fly Dubai later this morning, arriving in Yangon, the capital of Myanmar this evening.

I was planning to take part in the celebrations marking the fiftieth anniversary or golden jubilee of the Church of the Province of Myanmar, the autonomous Anglican church in the country once known as Burma.

I had bought and read travel books in anticipation of travelling throughout Myanmar, but one of the places I had marked out to see in time I had for myself was the last remaining synagogue in Yangon, the city once known as Rangoon.

In a country with large populations of Buddhists, Muslims, and Christians, Judaism is sometimes said to be Myanmar’s smallest religion. In a city where the tourist attractions include some of the world’s most striking Buddhist temples, the Musmeah Yeshua Synagogue has been ranked by TripAdvisor as the second landmark in Yangon, ahead of the 2,500-year-old Botataung Pagoda, the Central Railway Station and Taukkyan War Cemetery. 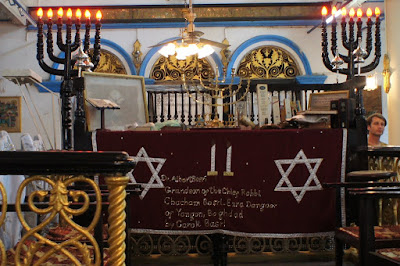 The Musmeah Yeshua Synagogue (בית כנסת משמיע ישועה‎) is the last remaining Jewish house of worship in central Yangon and Burma’s only synagogue. It serves the few remaining Jews in Myanmar, who are mainly descended from Sephardic Jews who arrived from the Middle East and India in the mid-19th century.

The Jewish population of Myanmar, including Yangon, is estimated at about 19 or 20 people. Other estimates say there are 10 Jewish families in Myanmar, and one report says as many as 80 expatriate Jews are living in Yangon.

The synagogue stands on a small street near the city centre, in a primarily Muslim neighbourhood, between Indian paint shops and Muslim traders. A plaque at the entrance says the present stone building, built in 1893-1896, replaced an earlier, smaller wooden structure built in 1854.

That first synagogue was built in the 1850s for the increasing numbers of Jews arriving during Burma’s colonial period. They were manly Baghdadi Jews from Iraq, Iran and the Middle East, and Bene Israel and Cochini Jews from India.

The present building was completed in 1896. This was a wooden building, built on a plot of land granted by the British Colonial Government.

The Jewish community in Yangon once had 126 Sifrei Torah or Torah scrolls at Musmeah Yeshua. Jews historically lived mostly in Yangon and Mandalay, and a second synagogue, Beth El, opened in 1932, reflecting the growth in the Jewish population in Yangon. Many members Burmese Jews worked as merchants and traders, while others worked with the colonial government. The city also had Jewish restaurants, pharmacies and schools.

The Jewish community continued to grow until 1942, and included David Sofaer, who in the 1930s was the Mayor of Yangon, then known as Rangoon.

At the start of World War II, the Jewish community in Rangoon reached its peak in 1940, with 2,500 or 3,000 people. However, many Jews fled to India due to the Japanese occupation, as they were considered suspect as allies of the British, and Beth El, the second synagogue built in Yangon, closed after World War II with a decline in the Jewish population.

After Burma’s independence in 1948, the new government approved an extension of the synagogue. Burma and Israel were first recognised by Britain as independent states in 1948, and Burma’s first prime minister, U Nu, had a close political relationship with his Israeli counterpart, David Ben-Gurion. U Nu was the first prime minister of any country to visit Israel.

But more Burmese Jews left after the army seized power in 1962, and as the government nationalised most businesses in the 1960s and 1970s. By the turn of the 21st century, fewer than 50 Jews were living in Myanmar.

The Musmeah Yeshua Synagogue in Yangon was restored with the help of international funding in 2007-2013. The project included raising funds to provide for the synagogue’s monthly expenses; restoring and maintaining the synagogue; and buying and setting out a new cemetery at a time when the government wanted to move all cemeteries out of the city.

Shortly after the project began, the synagogue lost its roof during Cyclone Nargis in May 2008 and sustained water damage. But these restorations were completed in 2013 and were celebrated at an international and interfaith gathering on 8 December 2013.

Three key figures in this project were the anthropologist Ruth Cernea, who wrote a history of the Jewish community in Rangoon; Laura Hudson; and Stuart Spencer, a member of the synagogue’s diaspora.

Sammy Samuel returned to Myanmar after studying at Yeshiva University in New York for three years, and has since set up a travel agency and two hotels in Yangon. Today, Sammy Samuels, whose Burmese name is Aung Soe Lwin, is the de facto leader of Myanmar’s remaining Jewish community. In 2006, he founded the travel company Myanmar Shalom with the aim of ‘connecting Jews around the world to our small Jewish community.’

All the traditional features of a synagogue are present in this well-maintained building, including the bimah or platform for reading the Torah, in the centre of the main sanctuary, the Aron haKodesh or Holy Ark housing the Torah scrolls, and the women’s balcony upstairs. The wooden ceiling features an original blue-and-white Star of David.

Although Yangon’s Jewish community has all but disappeared, and Musmeah Yeshua has not held regular services for half a century, the synagogue’s doors have not closed. A small group of Myanmar-born Jews have maintained the synagogue meticulously and welcome visitors. Very occasionally – usually on Jewish high holidays – services are held in the synagogue.

The Jewish cemetery, about 9 km away, was established in the 19th century and has about 700 graves.

The synagogue was awarded a commemorative blue heritage plaque by Yangon Heritage Trust and Yangon Regional Government in 2016 to remember the Jewish community in Yangon. It is ranked as among the ten top attractions in the city by TripAdvisor. It is one of 188 sites on the Yangon City Development Council’s list of Heritage Buildings. 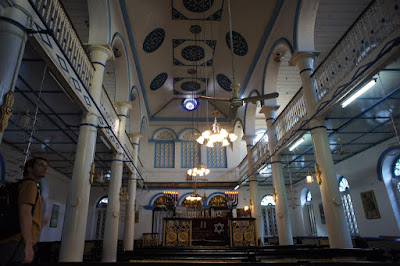 Lighting candles at a Holocaust Memorial Service in the Etz Hayyim Synagogue in Chania on the Greek island of Crete (Photograph: Patrick Comerford, 2018)

This week (22-28 March 2020), the USPG Prayer Diary is focussing on Pakistan, human rights, slavery and the churches in Myanmar and Morocco. These themes were introduced in the Prayer Diary yesterday by Bishop Humphrey Sarfaraz Peters, Bishop of Peshawar Diocese and President Bishop, Church of Pakistan.

Tuesday 24 March 2020 (International Day for the Right to the Truth concerning Gross Human Rights Violations and for the Dignity of Victims):

Lord, may we not turn a blind eye to injustice, but rather stand up for all who are victimised.