Turning a ‘mark of failure’ into a ‘sign of new life’ 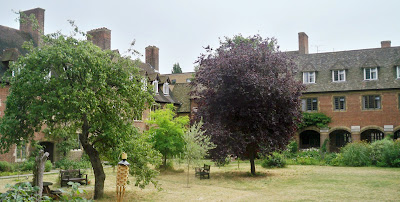 Cambridge has two Anglican theological colleges for training ordinands – Westcott House and Ridley Hall. Although not part of the University of Cambridge, both halls have close ties with the university and students receive their degrees through the university Faculty of Divinity or from Anglia Ruskin University.

During the week, I visited Westcott House and Ridley Hall. Westcott is around the corner from Sidney Sussex College, in Jesus Lane, close to Wesley House and Jesus College. Like the Institute for Orthodox Christian Studies, based in Wesley House, both Westcott and Ridley are members of the Cambridge Theological Federation.

Westcott began as the Cambridge Clergy Training School in 1881, founded by Bishop Brooke Foss Westcott (1925-1901) while he was the Regius Professor of Divinity at the University of Cambridge, and it was renamed Westcott House in his honour in 1901. Ridley Hall was also founded in 1881, and was named in memory of Nicholas Ridley, the 16th century Reformation martyr. 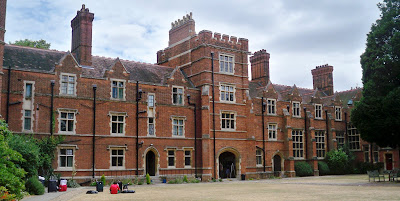 Ridley Hall, which has an evangelical ethos, is across Silver Street Bridge on Sidgwick Avenue on the west side of the River Cam. Ridley alumni include the former Archbishop of Dublin, Dr John Neill, and the current principal, the Revd Canon Andrew Norman, succeeded Dr Christopher Cocksworth who became Bishop of Coventry three years ago.

I was particularly interested in paying a return visit to Westcott House, where a former student at the Church of Ireland Theological Institute, the Revd Christopher Woods, moves there in a few weeks time as acting chaplain. Westcott House prepares men and women for ordination, provides pathways for theological educators and pioneer ministers, and offers continuing education resources and sabbatical opportunities for clergy and laity. 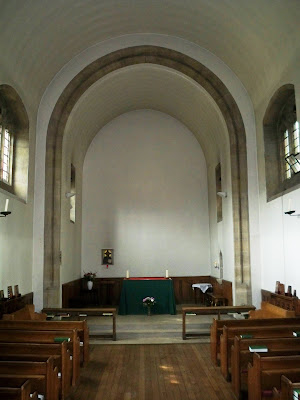 The interior of the chapel in Westcott House is marked by its uncluttered simplicity (Photograph: Patrick Comerford)

The chapel at Westcott is at the heart of the community life. Its uncluttered simplicity provides ideal sacred space for a range of services from sung high mass to said Morning Prayer, from adoration of the Blessed Sacrament to “prayer and praise” services.

As a worshipping community, Westcott House places the Church of England’s Common Worship at the heart of its life, and the diversity it expresses is reflected among the ordinands. But the Book of Common Prayer has a place there too so that students are immersed in its rhythms and at home with its language.

The Eucharist and the Daily Offices of Morning Prayer and Evening Prayer are at the centre of worship in Westcott House. The Community Eucharist on Thursday evenings is the focus of the worshipping week, and on Sundays, students are sent out in a diaconal spirit to local parish churches and college chapels.

Visiting preachers at Westcott have included the Chief Inspector of Prisons, for a celebration of Elizabeth Fry, the chaplain of Great Ormond Street Hospital, on Saint Luke’s Day, and the Archbishop of Canterbury, for the patron of the college chapel, Saint Athanasius.

Once a fortnight, the staff and students of the Cambridge Theological Federation – including those of Westcott House, Ridley Hall, the IOCS and Wesley House – join in shared worship. These services can bring a wide variety of experiences – from Orthodox vespers to charismatic evangelical communion to Roman Catholic Masses to remembrances of the Holocaust led by the Centre for Jewish Christian Relations.

The altar in Westcott Chapel, with the icon written by Marianna Fortounatto in 1981 (Photograph: Patrick Comerford)

The stark austerity of the chapel at Westcott is dominated by the icon of Christ, commissioned by the Common Room and written by Marianna Fortounatto in 1981. The icon bears his words: “You did not choose me but I chose you” (John 15: 16).

Archbishop Rowan Williams, in his book The Dwelling of Light: Praying with Icons of Christ (Canterbury Press, 2003) bases his chapter on the Pantocrator on this icon, writing: “The icon of the Pantocrator in the chapel of Westcott House, Cambridge, was and is for me and many others a profoundly significant image.”

Of its meaning he writes: “The point is simple: face to face with Jesus, there and only there, do we find who we are. We have been created to mirror his life, the eternal life of the one turned always toward the overflowing love of the Father; but our human existence constantly turns away. When we look at Jesus, we see in some measure what he sees, and are drawn to where his eyes lead us ... we look at him looking at us, and try to understand that as he looks at us he looks at the Father.

“In other words, when he looks at us, he sees the love that is his own source and life, despite all we have done to obscure it in ourselves. When we look at him looking at us, we see both what we were made to be, bearers of the divine image and likeness, and what we have made of ourselves.”

Westcott Chapel also hosts the services of the Russian Orthodox Parish of Saint Ephraim the Syrian. The parish usually meets on Saturday evenings and on Sunday mornings, and members of the House are warmly welcome to attend the services.

A landmark in Cambridge 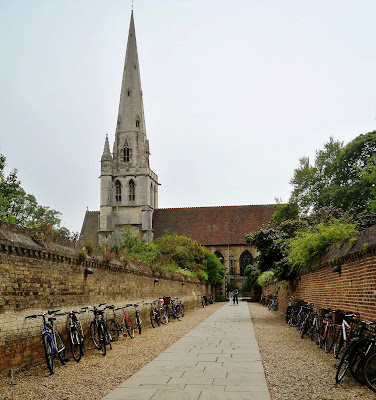 One of the weekday offices at Westcott is said at All Saints’ Church, which has been used for other occasional services, including a celebration of All Saints’ Day last year. The church stands on the corner of the Westcott House site on Jesus Lane, facing Jesus College. Its pale stone spire, which can be seen from Sidney Sussex, is a prominent city landmark. 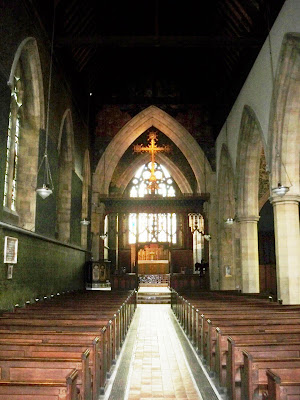 The interior of All Saints’ Church ... a fine example of the Gothic Revival and of the Victorian arts-and-crafts movement (Photograph: Patrick Comerford)

All Saints, which is a triumph of Victorian art and design, was built in the 1860s to the plans of the 19th-century architect GF Bodley, and was completed in 1871. The simple wooden door opens into a dramatic blast of colour and pattern. Light gleams through stained-glass windows, designed by leading Arts and Crafts artists, including William Morris, Edward Burne-Jones and Ford Maddox Brown.

Almost every surface has painted, stencilled or gilded decoration – pomegranates burst with seeds; flowers run riot over the walls; there is a glorious painting of Christ, the Virgin Mary and Saint John, with throngs of angels; the north aisle has three fine windows by CE Kempe and Co (1891-1923); there is stained glass by Douglas Strachan; and the fittings designed by Bodley include the alabaster font, the pulpit, and the oak aisle screen.

All Saints was declared redundant in 1973 and for years the church stood as a challenging symbol of the Church’s decline. But conservation work began in 2006 under the watchful eyes of Churches Conservation Trust, which cares for All Saints’, and this has resulted in Westcott starting to use the church again for worship.

Westcott is now planning to use the building – as has happened in the past – for liturgical and homiletic instruction, and students and staff are working with the Conservation Trust to turn what was once seen as a mark of failure into a sign of new life.

It is an interesting challenge for the Revd Christopher Woods, Secretary of the Church of England’s Liturgical Commission and National Worship Adviser, who has been appointed Acting Chaplain at Westcott for the Michaelmas and Lent terms next year (2011-2012).

Christopher trained for ordination at the Church of Ireland Theological College, and for the past four years he has been living in Cambridge, where he has been Chaplain and Director of Studies at Christ’s College since 2007. Two years ago, I was his guest when he invited me to deliver the Candlemas lecture-sermon in Christ’s College. He moves to Westcott at the end of August.

Over coffee in Michaelhouse, he explained how his work as Secretary of the Church of England’s Liturgical Commission and as he National Worship Adviser, means he spends part of his working week in Church House, Westminster, overseeing the work of the commission, and advising the Church of England on best practice in liturgy and worship and developing liturgical formation.