Visiting a country house in the suburbs and a suburban village 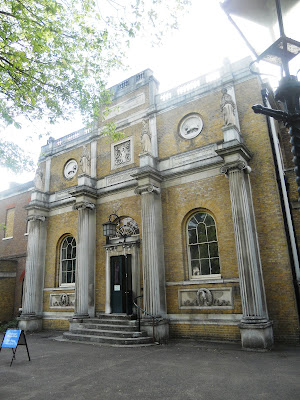 I strolled down to Ealing Broadway from Ealing Abbey late yesterday afternoon [Thursday], looking for bookshops, and ended up visiting Pitzhanger Manor House, off Ealing Green and Ealing High Street.

Because of Pitzhanger’s authentic period appearance, and its proximity to Ealing Studios, this old country house in the middle of a west London suburb, has featured in a number of films, including The Importance of Being Earnest (2002) and The Biographer (2000), in which it doubled as Kensington Palace.

The original manor house, Pitshanger Manor – and the spellings vary – stood about a mile or two north until the second half of the 17th century, near the centre of the modern Meadvale Road in the present suburb of Pitshanger. A second house, Pitzhanger Farm, stood on the site of the present manor house from about 1664. In the 18th century, this second house passed from the Wilmer family to Gurnell family of city bankers, and became known as Pitshanger Place.

A new house was built on the site in 1768 by George Dance. The architect John Soane, who had once worked for Dance, bought the place in 1800, along with an estate of 28 acres. He planned to use the house as his weekend retreat in the country and for entertaining.

He immediately set to work on building a new Pitzhanger Manor-House, and demolished most the older part of the house apart from the two-storey south wing designed by Dance. 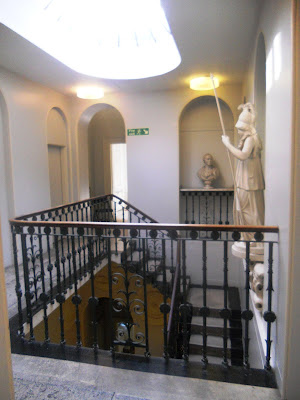 The central section of the house, which was completed by 1804, uses many typical Soane features: curved ceilings, inset mirrors, false doors, and wooden panelling with many cupboards. The house is remarkably similar to his main London home at Lincoln’s Inn Fields, now the Soane Museum.

Pitzhanger Manor House soon became what Soane saw as “a sort of portrait” – a public statement about his own idiosyncratic architectural style, with its stripped classical detail, radical colour scheme and inventive use of space and light.

However, Soane sold the house in 1810 and it then passed through several hands until 1843, when it became home to the daughters of Spencer Perceval, Britain’s only assassinated Prime Minister. 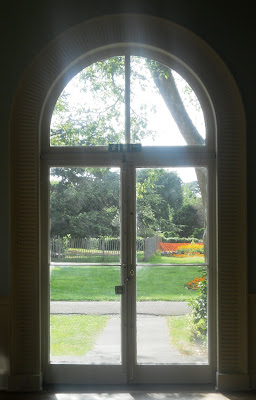 In 1900, the house was acquired by the local council as a Free Public Library. However, work on converting the building waited until the death of its last resident, Frederika Perceval, in 1901, and it opened to the public in April 1902. Soane’s ornamental gardens and parkland, including his bridge, entrance arch and lodge, became Walpole Park.

Restoration work began after the Library moved out in 1984, and the house opened to the public in 1987 as Ealing’s main museum. 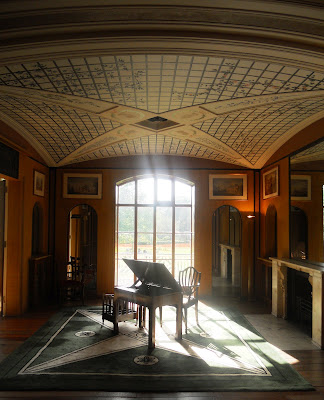 Recent restorations have returned much of the house back to Soane’s original design (Photograph: Patrick Comerford, 2012)

The recent restorations have returned much of the house back to Soane’s original design, using extensive documentation at the Soane Museum, including bills, correspondence with contractors, diaries and drawings to build up an authentic picture of the house in Soane’s time.

The house is now a showcase of Soane’s design and further restoration of the remaining rooms is being planned. 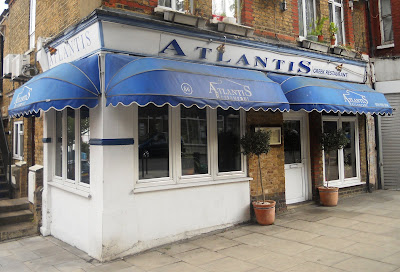 A little corner of Greece in a west London “village” (Photograph: Patrick Comerford, 2012)

Meanwhile, the name Pitshanger Village is retained in the area close to the original manor house. The village, which is a mile north of Ealing Broadway, and less than 10 minutes stroll from Ealing Abbey, is a small but busy local centre, centred around the shops in Pitshanger Lane, which runs parallel to and south of Meadvale Road, where the old manor house once stood.

Pitshanger Lane has numerous small shops, several cafés, two pubs, two churches, a library, a school, an Anglican parish church (Saint Barnabas) and a Methodist church side-by-side, a park named Pitshanger Park, and – to my delight for me – a Greek restaurant named Atlantis.

However, there is a hot debate locally whether the area is more accurately called Pitshanger. Some local people argue that the name “Pitshanger Village,” which was not used until after the 1980s, is an invention by estate agents to make the area sound more attractive.

But no-one can argue that Pitshanger Lane has a distinctive local identity and history despite being engulfed by the west London sprawl in the early 20th century.