The Bray Head Hotel, part of the story
of Bray, now faces an uncertain future 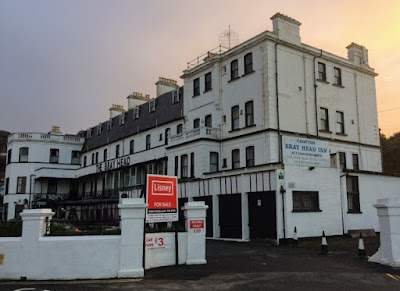 The possibility that Ardmore Studios in Bray are being put up for sale has attracted considerable media discussion in the past week. Any sale raises questions about the state’s continuing commitment to support the arts and also about the future of the Irish film industry which has been one of the great success stories of Ireland in recent decades.

But there are has been less attention in the media to the story of the Bray Head Hotel, which has come on the market in recent weeks, and which is part and parcel of the story and the romance of the Irish film industry and Ardmore studios, and which is one of the landmark buildings on the seafront in Bray. 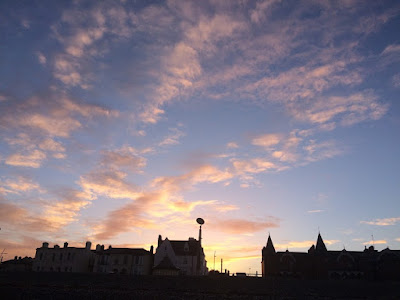 Sunset behind the Esplande Hotel and the Strand Hotel in Bray on Friday evening (Photograph: Patrick Comerford, 2016)

Some of the original hotels at the southern end of the promenade in Bray are still in operation. As the sun was setting in the west behind them, I stood on the beach late yesterday afternoon looking at the silhouettes of two of those hotels, with streaks of purple, blue and pink lighting up the winter clouds.

The Esplanade Hotel, which opened in 1897, is the best surviving example of these Victorian hotels, which were part of Dargan’s vision to develop Bray as the Brighton of Ireland. Next door is the Strand Hotel, which was built by Oscar Wilde’s parents, and which is nearing the completion of a thoughtful – perhaps even painstaking – refurbishing and restoration project.

Then, at the very end of the promenade is the Bray Head Hotel, where I received a warm welcome late yesterday afternoon when I decided to visit it. Although this hotel is not as well preserved as its neighbours, I wanted to see its fading but once-elegant Victorian interior before it faces an uncertain future. 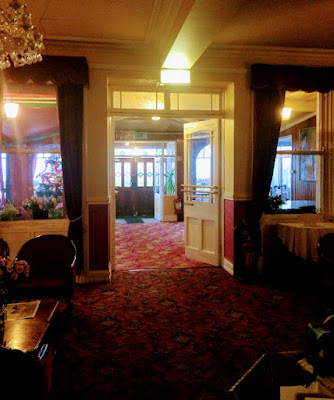 The Bray Head Hotel, also known as the Crofton Bray Head Hotel, is for sale after 55 years of ownership by the Regan family. The building, which was purpose built in the 1860s and 1880s is listed on the Record of Protected Structures. It stands on 1.11 acres and extends to more than 3,716 sq m (40,000 sq ft).

The owner of the hotel, Ena Regan Cummins, was happy to let me roam around the hotel yesterday, has decided to sell up after her husband Johnny died away last year. She has been running the Bray Head by herself since then, but now the hotel is now being sold after being owned by the Regan family for over half a century.

Although the hotel has been altered over the years and is now showing its age, it retains much of its late Victorian grandeur and forms a fitting end to Bray’s largely 19th-century seafront, and I was surprised that many of the Victorian features are still intact. 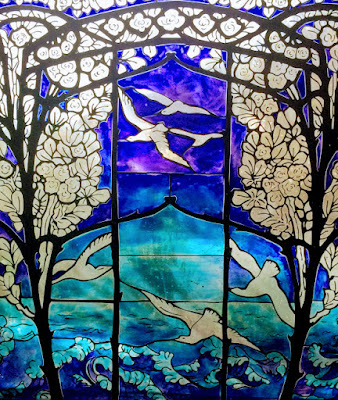 The Bray Head Hotel retains many features from the past (Photograph: Patrick Comerford, 2016)

Stepping into the hotel on Friday afternoon was like stepping back in time. The iconic Bray Head Hotel is on the market after being owned by the same family for the past 55 years.

This is a detached multiple-bay part three-storey and part four-storey hotel. It a is listed building was purpose-built built for JF Lacey in 1862. It was extended and rebuilt in the 1880s, and again in the early 20th century.

The building is finished in render with moulded quoins and decorative balustraded parapet. The central section is three-storey with a mansard roof and gabled dormer windows.

The ground floor of the central and northern sections is enclosed with a replacement porch or conservatory. 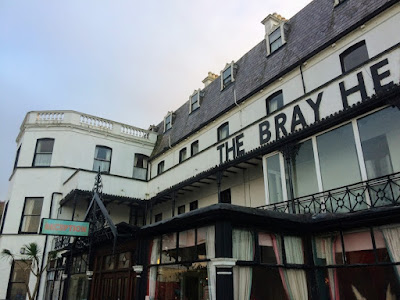 To the first floor of the central and northern sections there is a balcony with decorative wrought-iron guardrail directly above the porch. To the central section there is a further balcony at the second floor and this has a plain guard rail on which the hotel name is painted.

The windows are flat-headed and segmental-arch-headed with generally one over one timber sash frames.

The mansard roof is slated with mainly cast-iron rainwater goods; roofs to the north and south sections are flat. The chimney-stacks are rendered with corbelled caps and clay pots. 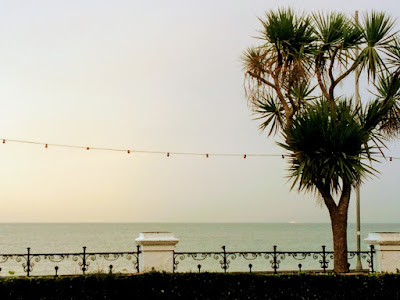 The Bray Head Hotel has sweeping views of the sea from Bray Head to Killiney Bay (Photograph: Patrick Comerford, 2016)

The hotel is the last in a chain of six acquired between 1950 and 1975 by Patrick and Nancy Regan. This made the Regan family one of the first Irish hotel chains owners and their group included the Crofton House Hotel and Salthill Hotel in Dún Laoghaire, which no longer stands, the Crofton Airport Hotel, now the Regency Hotel, the Crofton Hotel, now the Seven Oaks Hotel in Carlow, and the Holyrood Hotel, Bray, where a young U2 once played in front of two paying customers in 1978.

For many decades, the Bray Head Hotel was run by Nancy Regan with her daughter Ena and son-in-law Johnny Cummins, and over the decades the hotel hosted many a wedding reception.

The hotel was also popular with film stars working at Ardmore Studios and with RTÉ for filming. It featured in many films and the celebrity guests in those years included Richard Burton and Elizabeth Taylor.

Films shot here include The Commitments, Breakfast on Pluto and My Left Foot, as well as TV series such as Love Hate, Bachelor’s Walk and Ballykissangel.

But the hotel’s most famous guests were Richard Burton and Elizabeth Taylor, who visited regularly while he was working on The Spy Who Came in From the Cold, which was being filmed at Ardmore Studios in 1965. They were back again during the filming of Wagner in 1981.

Other stars who enjoyed drinks in the cocktail bar include George Peppard and Ursula Andress during filming of The Blue Max in 1966.

Later, there were weekly discos here in the 1980s and the early 1990s. At that time, the licensing laws required a nightclub to serve food, and so disco-goers were served with late-night plate of curry.

More recently, the ballroom was the venue for the closing night of the Bray Comedy Festival. 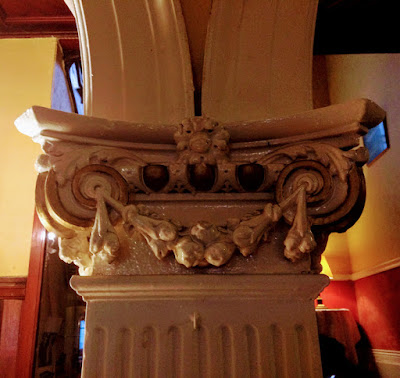 Many Victorian features, including stuccowork, have been preserved in the Bray Head Hotel (Photograph: Patrick Comerford, 2016)

Originally the hotel had 80 guest bedrooms but this figure has been reduced to 60, of which 48 are en-suite. The accommodation includes the Bray Head Cocktail Lounge, a large ballroom, function rooms and standout staircase.

The hotel’s location, standing below Bray Head and close to the start of the Bray-to-Greystones walking route, offers easy access to the Dart and has commanding sea views from Bray Head across to Killiney Bay towards Dalkey Island.

The property is being offered with vacant possession. The title to the property is freehold and it also has a seven-day licence. Lisney is quoting a guide price of €1.8 million, and the hotel could be set for redevelopment. 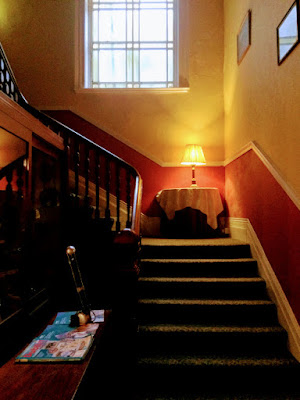 The future for the Bray Head Hotel is uncertain (Photograph: Patrick Comerford, 2016)

But the future for the Bray Head Hotel is uncertain.

Some years ago, planning permission was granted for the redevelopment of the hotel and the site with a new hotel with 18 bedrooms, restaurant and bar, and 33 apartments. But this permission has expired. There is obvious potential for redevelopment as an hotel, lounge and residential uses or for restaurant, leisure, nursing home or retirement home purposes.

Further information about the hotel and the sale is available from Ross Shorten and JP Flynn of Lisney. 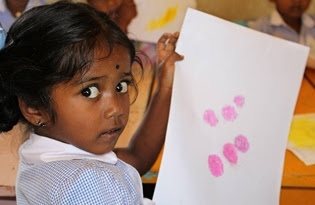 We have come to the end of the third week of Advent, with just a week left to go to Christmas Eve. Throughout this time of preparation for Christ’s coming at Christmas, I am praying each morning in Advent and using for my reflections the prayer diary of the Anglican mission agency, USPG (United Society Partners in the Gospel).

Pray for peace and justice in Sri Lanka. We pray for an end to tensions among ethnic and religious groups, and heart-felt reconciliation.