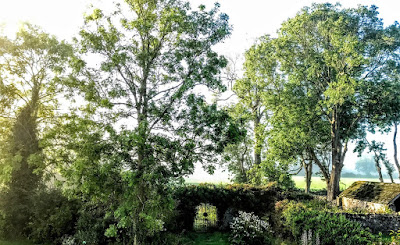 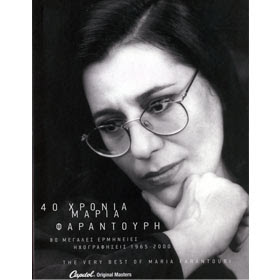 Before leaving Athens at the beginning of last week, I bought box set of four CDs by Greece’s best-known singer and political activist, Maria Farantouri, who turns 70 later this year on 28 November.

The CD collection, 40 χρόνια Μαρία Φαραντούρη, subtitled The Very Best of Maria Farantouri, was released ten years ago in 2007, and includes 80 great songs recorded by Maria Farntouri between 1965 and 2000.

I have been enchanted by the voice of Maria Farantouri (Μαρία Φαραντούρη) ever since she began working closely with the Greek composer Mikis Theodorakis and singing the songs of resistance to the colonels’ regime, which came to power in a coup 50 years ago in 1967 and was toppled in 1974.

During the military regime, she recorded protest songs in Europe with Theodorakis, and also worked with the Australian guitarist John Williams. She has recorded poems by Federico García Lorca, and songs in Spanish, Italian and English, including ‘Joe Hill,’ ‘Hasta Siempre Comandante Che Guevarra,’ African-American spirituals and songs by Bertolt Brecht. She has worked with many other modern Greek composers, including Manos Hatzidakis, Eleni Karaindrou, Michalis Bourboulis and Vangelis.

She was briefly involved in Greek party politics, when she sat in the Greek Parliament for the Panhellenic Socialist Movement (Pasok) in 1989-1993. Her husband, the Pasok politician Tilemachos Chytiris, was a press minister in successive Greek governments at a time when I worked regularly in Greece.

The first two tracks on this collection, Άσμα ασμάτων (Asma Asmáton) and Ο Αντώνης (Antónis or Anthony) are from Μπαλλάντα του Μαουτχάουζεν (The Ballad of Mauthausen), a cantata written by Iakovos Kambanellis and Mikis Theodorakis in 1965, 20 years after the end of World War II, and recorded in 1966.

Tracks 3 and 4, Ήταν 18 Νοέμβρη (On 18 November) and Το γελαστό παιδί (The Laughing Boy) celebrate the uprising in the Athens Polytechnic on 17 November 1973 that led to the downfall of the colonels within a year.

The Laughing Boy (Το γελαστό παιδί), composed by Mikis Theodorakis, was first included on the soundtrack of the 1969 movie Z, and quickly became associated with resistance to the fascists of the Greek junta.

The original laughing boy in Brendan Behan’s poem is Michael Collins, who was shot dead in the Irish civil war 95 years ago on 22 August 1922. Mikis Theodorakis adapted the Greek translation, and adapted it in the context of Grigoris Lambrakis, the pacifist activist killed by far-right extremists in Greece in the years before the colonels seized power.

Some years ago, my friends Paddy Sammon, a former Irish diplomat who was once based in Athens, and Damian Mac Con Uladh, an Irish journalist from Ballinasloe now based in Corinth, have researched the Irish background to this great Greek classic of resistance to oppression.

As Damian Mac Con Uladh has written, every Greek knows the song can sing some of, which they learned at school commemorations.

The play first came to the attention of Theodorakis while he was living in Paris, and he was inspired to compose a cycle of 16 songs in 1962 with Greek lyrics written by Vasilis Rotas (1889-1977).

Rotas’s translation of The Hostage was staged in Athens in 1962 at a time when the Greek civil war was still a taboo topic and left-wing activity was under close police surveillance. The play become a way for people to identify with their struggle against a repressive regime.

In the Greek version, the GPO, Mountjoy, Pearse and Ashe are replaced, gone is the Irish phrase Go raibh míle maith agat (‘Thank you a thousand times’), and the remaining reference to the English has lost its context and seems out of place.

Paddy Sammon points out that the song was given new life when it was featured on the soundtrack of the Costa-Gavras movie Z (1969) about the assassination of Grigoris Lambrakis.

Maria Farantouri went into exile after the coup d’état in 1967, and sang this song at solidarity concerts across Europe. ‘It became a hymn not only for the Irish liberation movement, but also for every liberation movement in the world, and Greek democracy,’ she told an RTÉ radio documentary.

When the junta sent in tanks against protesting students at the Athens Polytechnic on 17 November 1973, killing at least 24 people over a number of days, Farantouri added a couple of stanzas to the song, and changed the date from August to November, deliberately linking the song to that event.

This is the version of the song she sang at a concert with Theodorakis in Athens in October 1974 to celebrate the fall of the junta that summer and the restoration of democracy. And instead of saying the laughing boy was killed by ‘our own,’ the Polytechnic version names the killers as ‘fascists.’

As Damian Mac Con Uladh has pointed out, the song has developed more associations in recent years, including the murder of Alexis Grigoropoulos, a 15-year-old boy, by a special policeman in 2008, and the murder of the rap artist Pavlos Fyssas (34) by a neo-nazi Golden Dawn supporter four years ago on 17 September 2013.

The laughing boy by Brendan Behan

It was on an August morning, all in the morning hours,
I went to take the warming air all in the month of flowers,
And there I saw a maiden and heard her mournful cry
Oh, what will mend my broken heart, I’ve lost my Laughing Boy.

So strong, so wide, so brave he was, I’ll mourn his loss too sore
When thinking that we’ll hear the laugh or springing step no more.
Ah, curse the time, and sad the loss my heart to crucify,
That an Irish son, with a rebel gun, shot down my Laughing Boy.

Oh, had he died by Pearse’s side, or in the GPO,
Killed by an English bullet from the rifle of the foe,
Or forcibly fed while Ashe lay dead in the dungeons of Mountjoy,
I’d have cried with pride at the way he died, my own dear Laughing Boy.

My princely love, can ageless love do more than tell to you
Go raibh míle maith agat, for all you tried to do,
For all you did and would have done, my enemies to destroy,
I’ll prize your name and guard your fame, my own dear Laughing Boy.

The Greek lyrics could be translated back into English as:

’Twas an August morning near dawn
I went out to take air in the flowered earth
I see a daughter crying broken-hearted mourning
my heart broke for we’ve lost the laughing boy.

He had a manly courage and eternally I will mourn
his child-like step, his sweet laugh
Ah, curse the time, that damned moment
one of our own have killed the laughing boy.

O for him to have died at the leader’s side
and only from an English shot should have he gone
or from a hunger-strike in jail
it would have been an honour to have lost the laughing boy.

My princely love my love I shall cry for you
for whatever you’ve done for ages I shall tell
because all our enemies you would have undone
Glory and honour to the unforgettable laughing boy.