‘The people who walked in darkness
have seen a great light’ 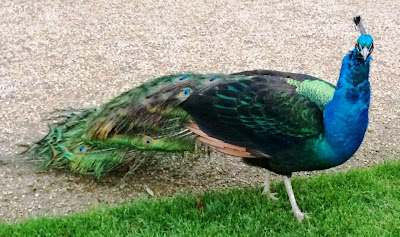 A peacock walks through the Regency Walled Garden in Marlay Park this evening (Photograph: Patrick Comerford, 2014)

I am not all-carolled-out yet. There’s still five more days to go to Christmas, and quite a few events yet to come at which carols are part of the programme.

This afternoon [20 December 2014], two of us went to the traditional Ecumenical Carol Service in Marlay Park. For years, this carol service has been hosted by the local Roman Catholic and Church of Ireland parishes, and for a long time it was held in the courtyard.

However, the venue has been moved recently because of pressure from the Saturday traders in the courtyard, and the service has been moved to an annex behind the coffee shop and beside the walled garden.

Before the service began, we enjoyed falafel wraps from the ‘Flavours of Palestine’ stall in the courtyard, and couple espressos from Bryan’s Coffee, and then strolled through the Regency Walled Garden as the evening lights were beginning to fade.

In other seasons of the year, this walled garden is riot of colour with its flowers, shrubs, trees and berries. 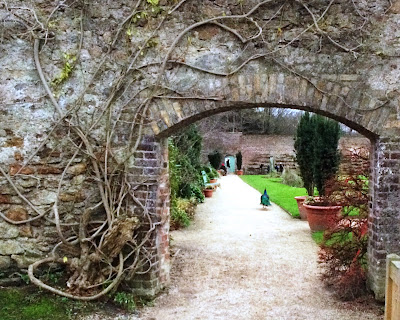 A strutting, confident peacock was the main colourful attraction in the Regency Walled Garden in Marlay Park this afternoon (Photograph: Patrick Comerford, 2014)

But late this afternoon, the main attraction in colour was a peacock strutting around quite fearlessly, pecking up bits of food dropped in the grass by people from the coffee shop and even confronting children in a cheeky manner, obviously begging for their children.

Early Christians used the peacock as a symbol of resurrection and eternal life because of an ancient belief that the flesh of the peacock never decayed. From the early third century, the walls of the catacombs in Rome were decorated with peacocks in mosaics and paintings, representing the hope that the mortal earthly body of Christians would become glorified bodies in eternal life.

When the peacock displays his pride or tail, it looks like hundreds of eyes are watching us. In this way, the peacock also became a symbol of the all-seeing eye of God and that nothing escapes God’s universal justice. 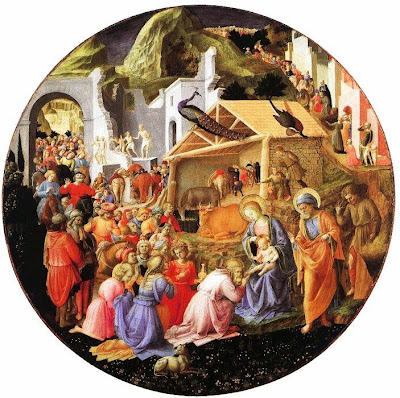 ‘The Adoration of the Magi’ by Fra Angelico and Fra Filippo Lippi (Florence, ca 1440/1460) … notice the peacock on the roof

When Fra Angelico and Fra Filippo Lippi collaborated in a unique work, ‘The Adoration of the Magi,’ in Florence around 1440-1460, produced one of the first examples of a tondo, or circular painting, which in the mid-15th century became popular for domestic religious paintings. But they also included a similar engaging and curious peacock on the roof, observing the whole scene.

After darkness fell this afternoon, we sang our way through the Christmas story at the carol service which was hosted this year by Marley Parish, with the support of Good Counsel Parish, Ballyboden, Divine Word Parish, Marley Grange, Saint John the Evangelist Parish, Ballinteer, and the Church of Ireland Parish in Whitechurch.

We sang old favourites, including ‘O come all ye faithful,’ Dingdong! Merrily on high,’ ‘Mary’s boy child,’ ‘While shepherds watched,’ ‘Hark the Herald Angels sing,’ Joy to the World,’ and ‘Away in a manger,’ while Catherine Martin of Ballybdoen sang a solo rendition of ‘O Holy Night.’ 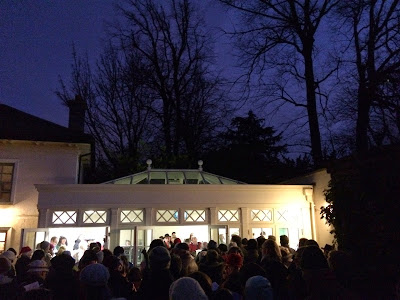 ‘The people who walked in darkness’ … this evening’s carol service in Marlay Park (Photograph: Patrick Comerford, 2014)

I was asked on behalf of Whitechurch Parish to read from the Prophet Isaiah:

The people who walked in darkness have seen a great light; those who lived in a land of deep darkness – on them light has shined. You have multiplied the nation, you have increased its joy; they rejoice before you as with joy at the harvest, as people exult when dividing plunder. For the yoke of their burden, and the bar across their shoulders, the rod of their oppressor, you have broken as on the day of Midian. For all the boots of the tramping warriors and all the garments rolled in blood shall be burned as fuel for the fire. For a child has been born for us, a son given to us; authority rests upon his shoulders; and he is named Wonderful Counsellor, Mighty God, Everlasting Father, Prince of Peace. His authority shall grow continually, and there shall be endless peace for the throne of David and his kingdom. He will establish and uphold it with justice and with righteousness from this time onward and forevermore. The zeal of the Lord of hosts will do this. (Isaiah 9: 2-7).

Again, the connection was made between the first Christmas and the promise of God’s coming ever-lasting justice.

Despite problems with the sound system and the winter cold, we all said the Lord’s Prayer together. I was asked the join the other clergy in the blessing before Dermot McGowan led us in singing Silent Night – as he has done for years.

The people who arrived in afternoon brightness waked out of the walled garden in darkness. From tomorrow the darkness begins to recede and the days begin to get longer once again. But there are still many carols to sing before Christmas arrives with the promise of the coming of God’s justice and eternal life. 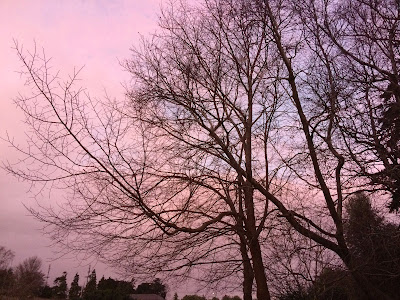 Posted by Patrick Comerford at 19:47 No comments: 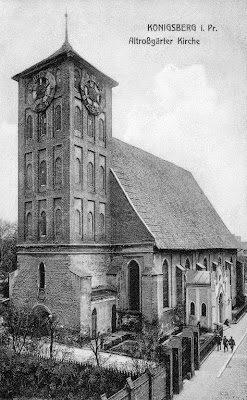 The Altroßgärter Kirche in Königsberg ... Georg Weissel wrote ‘Lift up your heads, you mighty gates’ for use in this this church, which was demolished after the Battle of Königsberg in 1945

As part of my spiritual reflections for Advent this year, I am looking at an appropriate hymn for Advent each morning. This morning [20 December 2014], I have chosen ‘Lift up your heads, you mighty gates,’ which is Hymn 131 in the Irish Church Hymnal.

This is a translation by Catherine Winkworth (1829-1878) of a German hymn for Advent, Mach hoch die Thür, das Thor mach weit, written by Georg Weissel and based on Psalm 24: 7, 9.

Georg Weissel is one of the most important of the early hymn-writers of Prussia. He wrote about 20 hymns, the earliest of which was written for use at the consecration of his new church, the Altroßgärter Kirche (Old Rossgarten Church) in north-east Königsberg, on the Second Sunday in Advent, 1623. This hymn may also have been sung on that occasion, although it was written for the First Sunday of Advent.

The son of a Prussian judge and burgomaster or mayor, he was born in Doranau, 40 km south-east of Königsberg, now Kaliningrad, an isolated Russian enclave between Poland and Lithuania He was educated in Königsberg, and later in Wittenberg, Leipzig, Jena, Strasbourg, Basel and Marburg. After a few years working at a school near Domnau, he returned to Königsberg to resume his theological studies. In 1623 he became the pastor of the Altrossgärter Kirche and there he remained until he died on 1 August 1635.

Some of his hymns have been translated into English, including today’s hymn, Macht hoch die Thür, das Thor macht weit. This Advent hymn on the Triumph for the Entry of the King of Glory is based on part of Psalm 24. The present third stanza alludes to the thoughts in I Corinthians 3: 16: “Do you not know that you are God’s temple and that God’s spirit dwells in you.”

This is One of the finest German Advent hymns, and it was first published in the Preussische Fest-Lieder in 1642.

Altrossgarten Church was heavily damaged during the bombing of Königsberg in 1944 and the Battle of Königsberg in 1945. The ruins were demolished by the Soviet administration in Kaliningrad in 1968. A silver-gilt chalice from the church is now in the Berlin archives of the Evangelical Church in Germany.

This hymn was translated by Catherine Winkworth, one of the greatest hymn writers in English, after John and Charles Wesley and John Mason Neale. She translated many hymns from German into English in Lyra Germanica (1855 and 1878) and Christian Singers of Germany (1869).

Catherine Winkworth was born in London 13 September 1829, the daughter of Henry Winkworth of Alderley Edge, Cheshire, and spent most of her early life in the Manchester area before moving to Clifton, near Bristol. She died suddenly of heart disease, at Monnetier, in Savoy, in July 1878.

The tune Wellington, supplied in the Irish Church Hymnal and the New English Hymnal for this hymn, was written by the English composer Michael Paschal Marcon Fleming (1928-2006), a former Warden of the Royal School of Church Music who had a significant influence on the standard of Anglican church music, through the RSCM and as director of music at several London churches.

He was born in 1928 in Oxford, where his father, the Revd ainGuy Fleming, was curate at the Anglo-Catholic St Mary Magdalen’s. His grandfather, Canon Arthur Fleming, was Precentor of Gloucester Cathedral and headmaster of the cathedral school.

He studied music at Durham University before moving to Cambridge as organist and choirmaster at Saint Giles, and continuing to study organ with George Guest at Saint John’s College. At Chingford Church in Essex, his teacher was Harold Darke. In 1958, Fleming was appointed Director of Music at All Saints’ Church, Margaret Street, London. Later, he held appointments in Croydon, Addington Palace, Saint Mary’s, Primrose Hill, where church music had been recovered for the Church of England by Percy Dearmer, and Saint Alban’s Church, Holborn.

In the early 1980s, Fleming built on Percy Dearmer’s work as a member of the editorial team of the New English Hymnal, to which he contributed much of the plainsong.

It was said that when he left Saint Alban’s, Holborn, in 1998, after 18 years the choir had the most extensive repertoire of any church in Britain. There he conducted the first liturgical performance, on All Souls’ Day 1987, and in the composer’s presence, of John Rutter’s Requiem. Bryan Kelly heard his own Like as the Hart for the first time on a visit to Saint Alban’s.

Fleming insisted that the words of hymns should be heard. Above all, he considered good music to be the handmaid of the liturgy and in 1999 he was awarded an MA Lambeth Degree “in recognition of his contribution to church music and liturgy.”

Shortly before his death he was working on the New English Hymnal supplement, New English Praise. His funeral took place on the eve of the 250th anniversary of the birth of Mozart.

Lift up your heads, you mighty gates, by Georg Weissel, translated by Catherine Winkworth:

Lift up your heads, you mighty gates;
behold, the king of glory waits!
The King of kings is drawing near;
the Saviour of the world is here.

O blessed the land, the city blessed,
where Christ the ruler is confessed!
O happy hearts and happy homes
to whom this King in triumph comes!

Fling wide the portals of your heart;
make it a temple, set apart
from earthly use for heaven’s employ,
adorned with prayer and love and joy.

Redeemer, come, with us abide!
Our hearts to you we open wide;
let us thy inner presence feel;
your grace and love in us reveal.