Dean Pete Wilcox of Liverpool,
former Chancellor of Lichfield,
is the new Bishop of Sheffield 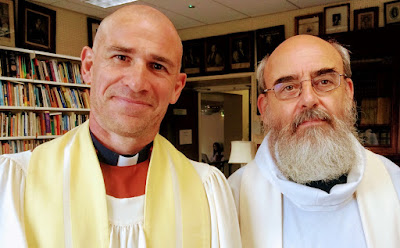 With Dean Pete Wilcox, the new Bishop of Sheffield, at a recent ordination in Saint Anne’s Cathedral, Belfast

I was delighted to hear the news yesterday [7 April 2017] that the Dean of Liverpool, the Very Revd Dr Peter Jonathan Wilcox, is to become the new Bishop of Sheffield. He succeeds the Right Revd Dr Steven John Lindsey Croft, who became Bishop of Oxford last year [6 July 2016. The new bishop will be consecrated at York Minster this summer and will take up his new role in the autumn.

I have known Pete Wilcox and his wife the novelist Catherine Fix since they moved into the Cathedral Close in Lichfield in 2006, when he was appointed the Canon Chancellor of Lichfield Cathedral.

They welcomed us to their home in Lichfield, and it was a pleasure to invite Pete to preach in the chapel of the Church of Ireland Theological Institute in February 2010, and Cathy to lecture on the subject of the writer as theologian. We last met when he preached at an ordination in Saint Anne’s Cathedral, Belfast.

The new bishop, who is 55, studied history at Saint John’s College, Durham. He trained for ordination at Ridley Hall, Cambridge before becoming a curate at Preston-on-Tees, in the Diocese of Durham (1987-1990).

He was an NSM priest at Saint Margaret with Saint Philip and Saint James, with Saint Giles in Oxford while completing a doctorate at Saint John’s College, Oxford (1990-1993).

Later, he was Team Vicar in Gateshead and Director of the Cranmer Hall Urban Mission Centre, Durham (1993-1998), and Priest-in-Charge at Saint Paul’s at the Crossing, Walsall (1998-2006), in the Diocese of Lichfield.

He was a Canon Residentiary at Lichfield Cathedral (2006-2012), and while he was in Lichfield he brought many school groups on tours of the cathedral and played a key role in May 2009 in setting up Speakers’ Corner, which serves as a public space for debate on corner of Minster Pool and Dam Street, below the south side of the cathedral.

Pete is married to the novelist Catherine Fox, who lectures in creative writing at the Manchester Writing School at Manchester Metropolitan University. They have two adult sons: Jon, who is married to Izzy, and Tom, who is engaged to Rosa.

Pete is a fan of Newcastle United and the author of three books, including Living the Dream: Joseph for Today (Paternoster, 2007).

Archbishop John Sentamu of York said the new bishop is ‘a gifted and renowned bible teacher, pastor and enthusiastic evangelist. He is totally committed to social justice and human flourishing.’

The one downside of this new appointment is that it comes after the person first appointed to the post stood aside after protests over his views on women priests and bishops.

Initially Philip North, Bishop of Burnley, was named as Bishop of Sheffield, but he decided not to take up the role after objections to his opposition to the ordination of women as priests and bishops. Bishop North accepted that his leadership would ‘not be acceptable to many.’

Almost a third of Anglican priests in Sheffield are women, and some formed a pressure group, Sheffield Action on Ministry Equality, to oppose Philip North’s nomination, although a number of women bishops offered their support, including the bishops of Dorking, Repton and Newcastle.

Speaking yesterday after his appointment was announced, Pete Wilcox alluded to the controversy: ‘Although the journey has been unconventional, to say the least, I feel called by God to this role and am therefore thrilled to be coming to the diocese of Sheffield.’

‘These aren’t the circumstances that any of us would have wished for,’ he added. ‘There are certainly wounds to be healed and a task of reconciliation to do but to be honest that work in the diocese is well under way.’

Bishop North said: ‘I am overjoyed to hear the news that Pete Wilcox is to be the next Bishop of Sheffield, a priest whose ministry I have long admired. He will bring great intelligence, insight, and evangelistic energy to the diocese of Sheffield, along with experience of ministry from a wide variety of contexts. I pray that clergy and laypeople of all traditions will be able to unite around his leadership, and so together continue to bring renewal to the parishes of the diocese, to the glory of God.’

Pete Wilcox is an evangelical who has been a ‘very strong advocate for the ordination of women as priests and bishops from the beginning.’ But he said it was ‘wonderful’ that the traditionalist Anglo-Catholic Bishop of Beverley, the Right Revd Glyn Webster, was present at the announcement of his appointment.

Catherine Fox, his wife, has written a challenging trilogy about ordinands and young curates, and is now producing a new trilogy, the Lindchester Chronicles. She was educated at Durham University and London University and has a degree in English and a PhD in Theology.

I first got to know her work through her first three novels that explore the themes of the spiritual and the physical with insight and humour: Angels and Men, The Benefits of Passion and Love for the Lost.

Her three latest novels are set in the fictional diocese of Lindchester. These novels have been compared by many reviewers to Anthony Trollope’s Barchester Chronicles. The first two are Acts and Omissions (2014) and Unseen Things Above (2015). She is completing the third part: Realms of Glory.

http://www.patrickcomerford.com/2017/03/anglican-studies-2016-2017-111-is-there.html
While she was researching and writing her novels, Catherine Fox closely consulted Tom Wright, who was then the Dean of Lichfield. Despite their strong language and graphic sex, these novels wrestle with the deepest theological questions, including the existence of God, the nature of sin, religious obsessions and psychological health, call and vocation, self-sacrifice, passion, death and resurrection.

She makes an insider’s criticism of evangelical dogmatism and charismatic extremes, and is not afraid to tackle topical debates, such as the ordination of women and the Church’s attitude to sexuality. 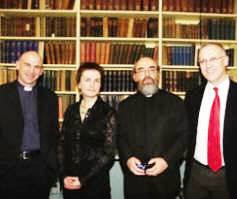 Catherine Fox on her visit to the Church of Ireland Theological Institute, with her husband, Dean Peter Wilcox (left), and Canon Patrick Comerford and the Revd Dr Maurice Elliott 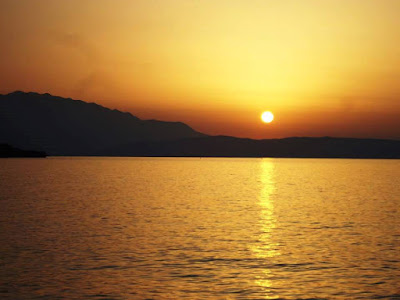 ‘As we acknowledge the cost of discipleship, may we also know the comfort and joy that come from resting in the love and power of God’ … Sunset in Rethymnon, Crete (Photograph: Patrick Comerford)

We are now in Passiontide, the last two weeks in Lent, and little more than a week away from Easter Day [14 April 2017], with Holy Week beginning tomorrow, on Palm Sunday.

This week, from Passion Sunday (2 April) until today (8 April), the USPG Lent Prayer Diary is following the topic ‘Counting the Cost.’ The topic was introduced on Sunday in an article in the Prayer Diary by the Right Revd Margaret B Vertue, Bishop of False Bay Diocese in South Africa.

As we acknowledge the cost of discipleship, may we also know the comfort and joy that come from resting in the love and power of God.