Sunday morning in a lively and vigorous parish in Ealing 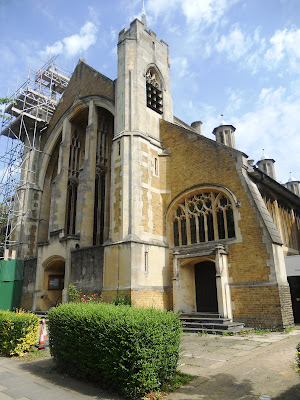 In his poem Return to Ealing, John Betjeman recalls quiet Sunday mornings in the tree-lined suburban streets, and he writes:

In Ealing on a Sunday
Bell-haunted quiet falls …

“Bell-haunted quiet” fell on Ealing yesterday morning [Sunday 19 August 2012], and I had a choice of churches to go to. The nearest Church of England parish church went to Saint Peter’s, on the junction of Mount Park Road and Montpelier Road, a five-minute walk from Ealing Abbey.

Liturgically, Saint Peter’s is in the contemporary liberal Catholic tradition in Anglicanism, describing itself as lively and vigorous in its faith. The worship is focused on the 10 am Sunday Parish Mass, with vestments, music and incense. Evening Prayer is said every Sunday, with Book of Common Prayer Evensong on the first Sunday of the month and weekly in Advent and Lent. The church is open daily from 8.45 am to 6 pm, and sees this as an important part of its mission.

Mass this Sunday morning was celebrated by the new vicar, the Revd David Neno, and the preacher was the Reader, Susan Peatfield, who usually supervises the Junior Church and also preaches regularly. Saint Peter’s has two NSM priests who are assistant curates and share the liturgy and the work of the parish: the Revd Dr Margaret Joachim, who celebrating Mass this morning in another nearby Anglican parish church, Saint Barnabas on Pitshanger Lane, and the Revd Keith Stephenson.

Saint Peter’s has had a succession of well-known organists. The Director of Music, Mark James, who played the organ this morning, previously worked with the boy Choristers of Ely Cathedral as the Choir House Music Tutor. Saint Peter’s encourages active lay participation leading readings, intercessions and the offertory, and as Ministers of the Eucharist, and the liturgical procession this morning included two acolytes, a thurifer, a crucifer, the reader and the celebrant.

Over coffee in the parish centre afterwards, I received a warm welcome from the parishioners and was told that in recent years, there have been parish pilgrimages to Turkey and Syria. There was a lively Traidcraft stall, and I also heard the parish supports the Sudanese Development Programme and School run by Father Joseph Choufar, and an ordained Consultant Ophthalmologist working in Nigeria, and also supports ALMA – the link between the Diocese of London and the Anglican Church in Mozambique and Angola. 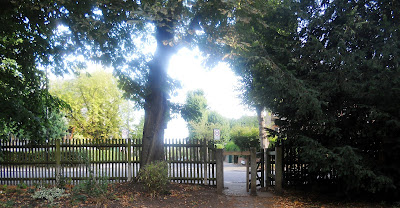 Saint Peter’s stands at the junction of Mount Park Road and Montpelier Road. The parish is in the Deanery of Ealing and the Willesden Episcopal Area of Bishop Pete Broadbent within the Diocese of London. Saint Benedict’s Abbey is on its western side of the parish, central Ealing to the south, and the A40 and North Circular Road are on its eastern and northern fringes.

Both the church and the vicarage are within a Conservation Area and the parish is made up of mainly residential properties with just a few offices, shops and pubs, and a population of 7,051. Over 57% of these people describe themselves as Christian, unemployment levels are relatively low, and a high proportion of the people are in higher managerial or professional jobs. About 12% of the congregation are from ethnic and linguistic minorities.

The parish was formed in 1894 out of the parish of Christ Church (now Christ the Saviour on Ealing Broadway) to serve the growing suburban areas north of Haven Green. Before that the area had been served from 1882 by an iron church. 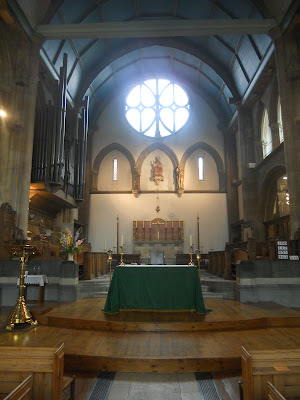 Saint Peter’s recently received a grant of £156,000 for high-level masonry repairs to the turrets, and part of the building is covered in cladding and scaffolding. But this is a Grade II* listed building, and Saint Peter’s rivals Saint Benedict’s at Ealing Abbey as one of the finest churches in Ealing. The architectural historian, Sir Nikolaus Pevsner, described Saint Peter’s as described as “the premier architectural work in Ealing.”

The church was designed by John Dando Sedding, who was chosen from among three architects who entered a competition in 1889. His revised plan appeared in The Architect in 1890, and was complimented by The Builder: “The whole thing is a piece of real originality in design, which is refreshing to come across after seeing so many repetitions of old forms, Classic and Gothic.”

However, Sedding died before the building began, and the church was completed in 1892-1893 by his pupil Henry Wilson, who brought an Arts and Crafts approach to the design. The foundation stone was laid by Queen Victoria’s third daughter, Princess Helena (Princess Christian of Schleswig-Holstein).

The church is built in free Gothic style, with a three-bay nave, two-bay choir, in yellow stock brick with stone mouldings, arches, quoins, buttresses and tracery. 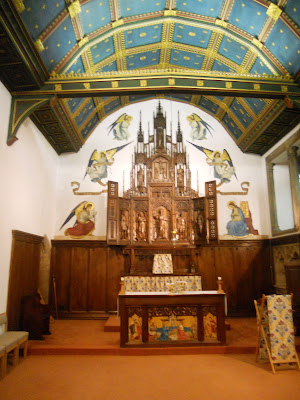 The South Chapel in Saint Peter’s was built alongside the chancel in 1913 (Photograph: Patrick Comerford, 2012)

Although the planned tower was never built, the structure has been added to continuously over the years, so that a side chapel, which now serves as the parish office, was built in the south transept in 1912, the proper south chapel was built alongside the chancel in 1913, and the Chapel of the Incarnation was refurbished as the War Memorial Chapel in 1919.

Later, the east wall was panelled in oak, a large carved oak reredos was installed, an oak screen was added to the west end of the chapel and the east wall was painted with angels and an Annunciation scene. A nativity scene was painted on the front of the chapel altar in 1928, a statue of Saint Peter was installed in 1948, a figure of Christ in Majesty was attached to the east wall above the high altar in 1958, and figures of the Blessed Virgin Mary and Saint Michael the Archangel were added on either side in 1960. The animal carvings I could see in the choir include an elephant, a giraffe, an ox and a lion. 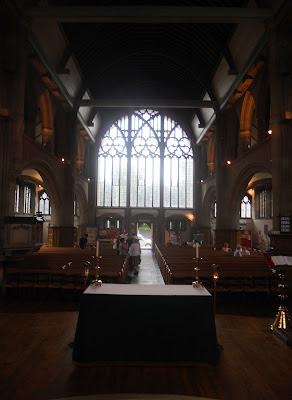 The large west window and the lack of stained glass means Saint Peter’s is filled with light (Photograph: Patrick Comerford, 2012)

Although a lack of funds in the early decades means very little stained glass was fitted in the church, this has made the church very light inside, and the church has two unusual architectural features:

(a) the enormous, deeply recessed west window divided into three lights by buttresses rather than mullions and in a mixture of gothic and art deco designs; and

(b) the internal piers that penetrate the roof and are completed with turrets that stick out halfway up and are connected by depressed arches. 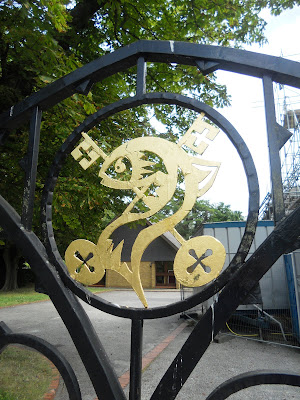 The keys of Saint Peter on the gates into the church gardens and parish centre (Photograph: Patrick Comerford, 2012)

Across the corner from the church, a small park offers shade from the summer sun. Should I come back again on another Sunday, perhaps I shall find myself recalling those opening words of Betjeman’s poem: