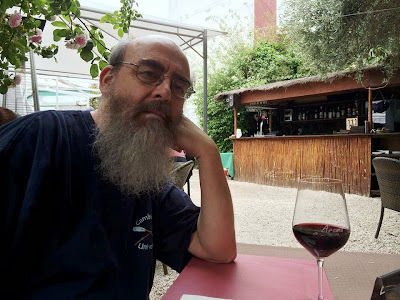 This week’s edition of the Lichfield Mercury includes the following photograph and news report:

History lovers can get a fascinating insight into Lichfield’s Cathedral Close thanks to a walking tour next week.

The event has been organised by the Lichfield Discovered group and will be Revd Canon Professor Patrick Comerford (PICTURED).

The tour is open to everyone and people are welcome to bring along tablets and iPads as Patrick will be uploading his notes on each building as the tour progresses. The walking tour will start at 7pm on Monday, May 12, outside St Mary’s in the Market Square. 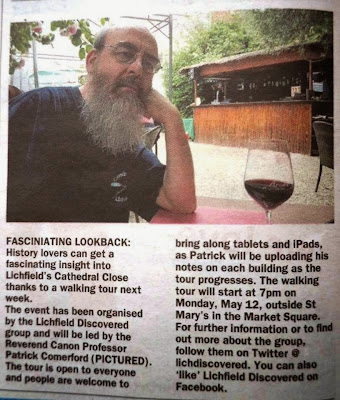 Posted by Patrick Comerford at 21:45 No comments:

Sitting in the front rows of General Synod
... but where will we be in two years’ time 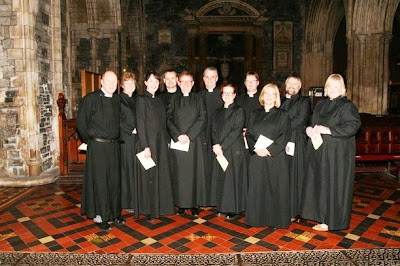 Students and ordinands from the Church of Ireland Theological Institute at last night’s Synod Eucharist in Saint Patrick’s Cathedral, Dublin

This afternoon at General Synod we debated whether we should continue meeting every second year in Christ Church Cathedral, Dublin.

It looks like the arrangement is coming to an end after the synod passed a private member’s motion moved by Mrs Joan Bruton of the Diocese of Meath and Kildare. The resolution acknowledges the “assistance of the Dean, Chapter and Staff of Christ Church Cathedral,” but proposed that “the General Synod should be located in the City of Armagh subject to contractual agreement until another venue.”

As Archbishop Richard Clarke pointed out, the synod will meet in Armagh next year anyway [2015]. But where are we going to meet in 2016?

Thisafternoon, during bthe debate on the report of the Council for Mission, I spoke about the work of Us, the Anglican mission agency which began as the Society for the Propagation of the Gospel, and later became USPG. This year, Us is celebrating the 300th anniversary of its foundation in Ireland in 1714, with tercentenary services in Saint Macartin’s Cathedral, Enniskillen, and Saint Patrick’s Cathedral, Dublin.

One of the pleasures I have had at General Synod for many years now is acting as one of the Church of Ireland hosts to our ecumenical guests.

This year, the Church of England is represented by the Bishop of Brixworth, the Right Revd John Holbrook, who has been a Suffragan Bishop in the Diocese of Peterborough since 2011. 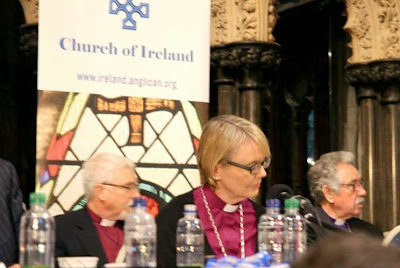 It has been interesting to observe their positive reactions when Bishop Pat Storey chaired one session of the General Synod this morning, and to her place in the procession in Saint Patrick’s Cathedral, Dublin, last night, when she took her place as the senior bishop of the Church of Ireland, immediately before the two archbishops.

We have had meals and coffee breaks together, we have had very open discussions about the opportunities and problems our traditions face in ministry and mission, and we attended the Synod Eucharist in Saint Patrick’s Cathedral last night [8 May 2014]. 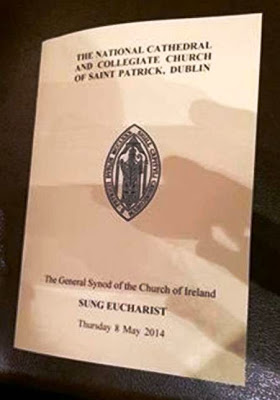 Last night the chapter of Christ Church Cathedral was invited to robe and process with the chapter of Saint Patrick’s Cathedral for the Synod Eucharist, and students and ordinands from the Church of Ireland Theological Institute also took part in the service. This afternoon, in Christ Church Cathedral, the general synod debated the report of the Commission for Christian Unity and Dialogue, which included a report on the progress we are making in dialogue between the Church of Ireland and the Moravian Church.

It was a particular pleasure to be sitting in the front rows this afternoon with Sarah Groves when we heard about this dialogue and yesterday with Heather Morris and Gillian Kingston when the Bill providing for the inter-changeability of ministry between the Church of Ireland and the Methodist Church in Ireland passed its first and second stages.

The Bill, in the name of the Very Revd Nigel Dunne and Bishop Michael Burrows of Cashel, Ferns and Ossory, builds on the 2002 Covenant between the Church of Ireland and the Methodist Church in Ireland which looks forward to a time when the ministries of both Churches could be fully inter-changeable and both churches could be visibly united.

Dean Dunne pointed out that both churches will continue to operate their own systems of government, organisation and ministry, and the three-fold order of bishop, priest, and deacon remains fundamental to the ordained ministry of the Church of Ireland.

This Bill has comes at the end of many years of dialogue, with substantial endorsement of each stage of the discussions on inter-changeability by the General Synod at each crucial juncture.

The Church of Ireland Gazette carries the following report in today’s edition [Friday, 9 May 2004], on page 5:

On Wednesday 14th May, a newly-written publication – The Moravian Burial Ground at Whitechurch, County Dublin – will be launched in Dublin.

The illustrated work has been researched and written by Dr Rosemary Power, a member of the Moravian Church and a historian and folklorist.

The launch event, at which the speakers will be Prof. Patricia Lysaght and Canon Patrick Comerford, will take place in Whitechurch Old Schools in the grounds of Whitechurch parish church.

Prior to the launch event, from 6.30 pm – 7.30 pm, the author will lead a guided tour of the nearby Moravian Burial Ground.

For further information on the launch, tel. Dublin 493 4972 or email: whitechurchparish@eircom.net