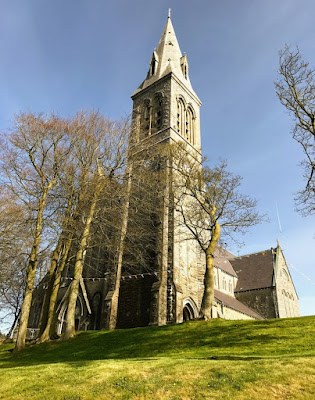 Saint Mary’s Church stands on a commanding hill on the north side of Rathkeale (Photograph: Patrick Comerford, 2017)

During a working day in Rathkeale, Co Limerick, yesterday [13 March 2017], I took time to visit Saint Mary’s Church, the Roman Catholic parish church, which was designed in the Gothic-revival style by James Jeremiah McCarthy (1817-1882), and which is one of his most splendid works of architecture.

A few weeks earlier, I had visited Cahermoyle House, near Newcastle West, the home of William Smith O’Brien, which was also designed by McCarthy. The architect who inherited the mantle of AWN Pugin, designed other parish churches in Co Limerick, including Saint Senanus Church, Foynes (ca 1868), the Church of the Immaculate Conception, Ballingarry (1872-1879), and the Church of Saint Peter and Saint Paul, Kilmallock (1878-1879), as well as repairs to both Saint Saviour’s Dominican Church in Limerick (1860) and the Church of the Immaculate Conception, Newcastle West (1861).

Yet, this church on a commanding hill on the north side of Rathkeale has been described by Dr Pat Wallace, former director of the National Museum, as McCarthy’s ‘finest Church in Limerick’ and ‘the finest Christian place of worship of the last two centuries.’ Indeed, it is said McCarthy considered this church to be his finest work. 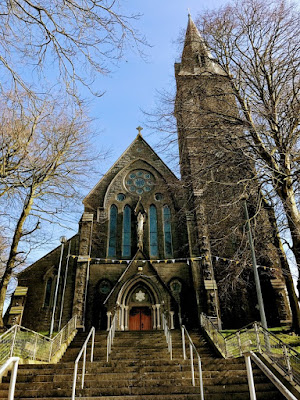 The church stands on the site of a house and grounds donated by the Magnor family, and at first the Christian Brothers had a school here in 1859.

McCarthy designed Saint Mary’s in the Gothic Revival French Norman style for Father James O’Shea, who was the Parish Priest of Rathkeale (1864-1877). Work began in 1866, and the church was consecrated on 17 August 1873. However, Father O’Shea died in 1877, and never survived to see the spire.

The tower and spire of the church were completed in 1881 for Archdeacon Halpin, who dedicated them to the memory of his predecessor. The church bell was installed a year later in 1882.

This large cruciform church in the Gothic Revival style is an imposing feature on the north side of Rathkeale, standing on a height on the main route from Limerick into the town. The site is enhanced by both the graveyard to the north of the church and the gates and railings to the east and west. 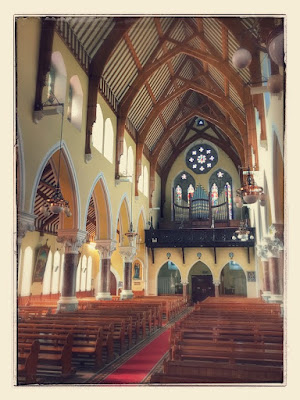 Inside, Saint Mary’s Church retains much of its original form (Photograph: Patrick Comerford, 2017)

The church retains much of its original form, with detailed design and imposing elements such as the tall tower, the variety in the window openings, and the tall transepts and chancel. Inside, despite the changes ushered in with the liturgical reforms after Vatican II, the church still has many of its important original details, including the stained-glass windows, the reredos, the hammer-beam roof, the timber gallery and the colonnades.

Saint Mary’s is a freestanding, gable-fronted Gothic Revival cruciform-plan church. It has five-bay nave elevations with side aisles. The side aisle to the north has a single-bay, single-storey gabled porch, and there are gabled transepts. There is a canted chancel to the east and a multiple-gabled, single-storey sacristy with a gabled porch and lean-to to the south-east.

The tower at the south-west corner has a three-stage, square-plan. The dressed limestone steeple has a carved cross finial at the top and gabled projections with pointed arch vent openings.

The church was built by skilled craftsmen. The contractors were the Ryan family from Waterford and Limerick, and the contractors for the tower and spire, which cost £2,300, were M. Walsh of Foynes and Patrick Scanlon. 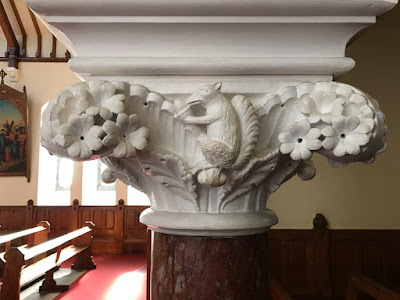 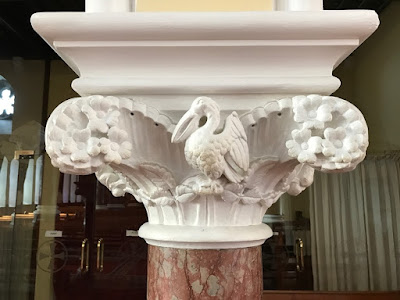 A large marble plaque in the south-west porch records the Magnor family and other major donors. They include Lord Southwell, who donated the windows in the apse, the Earl of Dunraven who donated the former pulpit, Patrick Hartigan and his family donated the Stations of the Cross in 1874.

Inside, the decorative work of interest includes the stained-glass windows in the apse with coats of arms illustrating the genealogy of the Southwell family, the carvings on the pillar capitals, including animals and birds on the pillars, such as a pelican feeding her young and a squirrel with nuts, under the organ loft and the round window over the west door. 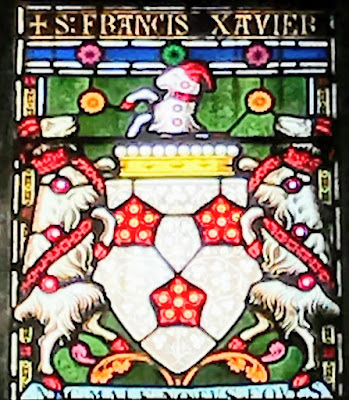 The windows in the apse in Saint Mary’s Church decoratively illustrate the family tree of the Southwell family (Photograph: Patrick Comerford, 2017)

The Southwell family lived at Castle Matrix or Castle Mattress, west of Rathkeale, and their titles from the 17th century included baronet (1662), Baron Southwell (1717), and Viscount Southwell (1776). 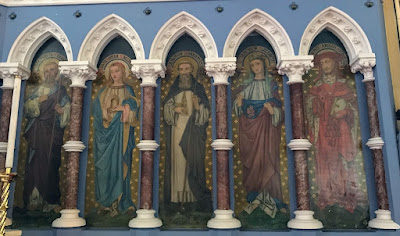 Some of the saints on the mosaics on the reredos in Saint Mary’s Church (Photograph: Patrick Comerford, 2017)

At the north side of the chancel, above the altar to the Sacred Heart, a stained-glass window depicts Christ as the Good Shepherd with the Virgin Mary and Saint Joseph on either side.

The large stained glass window in the south transept is divided in three sections with three levels to each section. The middle level shows Saint Brigid, the Blessed Virgin Mary and Saint Timothy. The rest of the window shows the Twelve Apostles with the words of the Apostles’ Creed throughout the window. 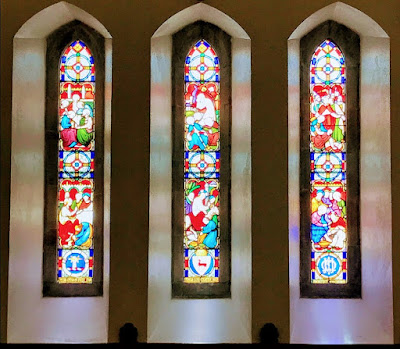 The architect JJ McCarthy also donated the three-light stained-glass Passion Window. On the left, the window depicts the Last Supper and Saint Mary Magdalene washing the feet of Christ.

The middle panel shows the Agony in the Garden of Gethsemane and Christ entering Jerusalem on Palm Sunday.

The right window depicts Judas betraying Christ with a kiss and the cutting off of the servant’s ear, and below the Washing of the Feet at the Last Supper.

The decoration is enhanced by the McCarthy coat-of-arms, complementing the Southwell heraldic display in the windows in the apse. 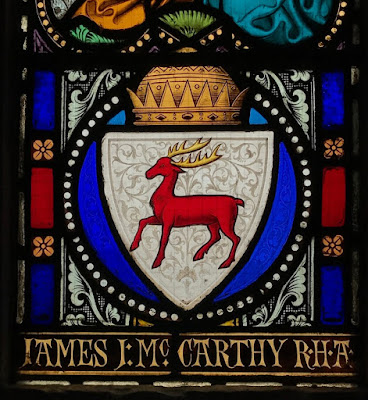 William Monsell (1812-1894), Lord Emly, donated the stained-glass windows above the choir gallery in 1873. These show Christ the King with Saint Patrick, Saint Bridget, Saint Bertha the Abbess and Saint William the Abbot.

Monsell was a son-in-law of the Earl of Dunraven and was MP for Co Limerick (1847-1874) while the church was being built. A friend of Cardinal Newman and Cardinal Wiseman since his days in Oxford, he had been a supporter of the Tractarian Movement and became a Roman Catholic in 1850. In 1874, he came Lord Emly.

At the west end of the church on the south side, a mosaic of the Angel Gabriel was given by General Thomas Lloyd and Mrs Mary Henrietta (Althusen) Lloyd of Beechmount. The mosaic was given in memory of their only child, Captain Thomas Henry Eyre Lloyd (1871-1901) of the Coldstream Guards, who was killed at the age of 30 at Brakeenlaagte, Transvaal, during the Boer War in 1901.

Captain Lloyd was buried in Primrose Cemetery, Johannesburg, but because he was accused of disobeying his superior officers he was never mentioned in dispatches. The plaque illustrates his parents’ determination to clear the name of their only son in later years. They also erected a second memorial in Saint Mary’s Cathedral, Limerick.

The windows donated by the Southwell family of Castle Matrix, the pulpit from the Earl of Dunraven and memorials erected by local Church of Ireland families, including the Lloyds of Beechmount, are interesting public displays of an open-minded ecumenism in Victorian Co Limerick long before modern ecumenism developed a century later after Vatican II. 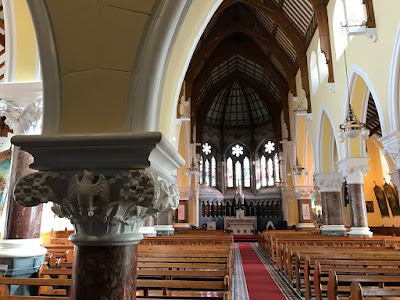 Saint Mary’s Church remains one of ‘the finest Christian place of worship of the last two centuries’ (Photograph: Patrick Comerford, 2017) 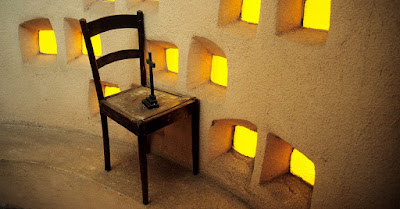 A make-shift altar at Saint James’ Anglican Hospital in Lesotho … ‘Pray that we might understand more deeply the communal nature of discipleship: that no-one can be a disciple in isolation – we are all members of churches or communities’ (Photograph: USPG)

This week, from Sunday (12 March) until Saturday (18 March), the USPG Lent Prayer Diary follows the topic ‘How shall we live.’ The topic was introduced on Sunday in an article in the Prayer Diary by Maropeng Moholoa, of the Anglican Church in Southern Africa, who oversees a USPG-supported community development programme in Lesotho.

Pray that we might understand more deeply the communal nature of discipleship: that no-one can be a disciple in isolation – we are all members of churches or communities.