Is Omega Avenue at
the end of the road?

Omega Avenue … is this the end or the beginning? (Photograph: Patrick Comerford, 2017)

There was once a nursing home in a town in Cavan that was known as Omega Nursing Home.

It seemed like an unfortunate name for a nursing home. Was someone telling the residents that they had reached the end of the line? If Omega was at the exit from the town, was there another place at the entrance to the town known as Alpha? Perhaps a playschool for children, even for boys who might be inspired to grow up as ‘Alpha Males’?

The old name Omega has gone and has been replaced. Obviously the former name had reached its natural end.

I was reminded of it recently as I walked along Ballinacurra Road into Limerick, and noticed the sign for Omega Avenue. Was I at the start of this street? Or at the end?

It is interesting how some letters in the Greek alphabet for names of places and other names in the English language. We can talk about ‘Alpha Males’ and, in these cases, about Omega Home and Omega Avenue. We talk too of Gamma Rays, river deltas, and use other Greek initials.

Perhaps it’s just as well that those charged with choosing these names resist the temptation to select letters in the Greek alphabet that have no equivalent single initial in initial and that are difficult to pronounce for tongues that are used to Anglo-Saxon sounds.

Most people are probably familiar since school days with the value of Π or π. The number π is a mathematical constant, originally defined as the ratio of a circle’s circumference to its diameter, it now has various equivalent definitions and appears in many formulas in all areas of mathematics and physics. It is approximately equal to 3.14159 … although I could go on … and on.

And we probably pronounce it ‘Pie’ rather than ‘Pee’ ... perhaps not to confuse it with the letter P, which in Greece, confusingly, is the equivalent of the letter R.

But no-one is going to name a street or a nursing home Psi (Ψ or ψ) Avenue or Ksi (Ξ or ξ) Home. Pronouncing them is difficult enough for people in Ireland and England, without also trying to find the proper keystrokes on your laptop as you try to send an email or a text from your phone.

But the Greek alphabet has some other interesting differences from the alphabet used by English speakers. If Omega (Ω or ω), comes at the end, then Z (Ζ or ζ) is sixth, and as I was trying to learn to read and write Greek I kept on confusing ζ and ξ – probably the Greek equivalent of failing to mind your Ps and Qs … because the Greek alphabet has no Q.

After Z, there are so many other letters. The next immediate letter is H (or η), but this is not the English H. This is the letter known as eta, and pronounced ee as in the English word meet.

But meeting the capital H on roadsigns around here is confusing too.

H is for Hospital (whether you aspirate it or not). It should mean you are well. And on this road sign in Limerick it means Patrick’s well too. Well, the Hospital is not in Patrickswell. Although there is also a small town in Limerick called Hospital … there is no hospital there either, it takes its name from the Knights Hospitaller who had a priory here in the 13th century.

It is just as well that Patrick is well. 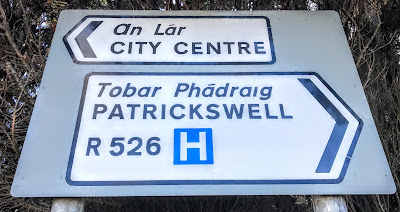 H is not for Patrick … and yes, he is well (Photograph: Patrick Comerford, 2017) 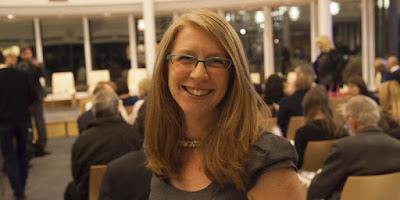