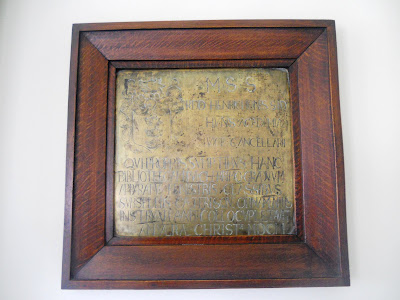 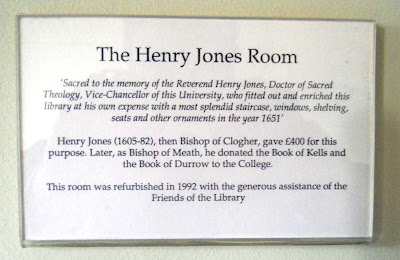 The plaques in the Henry Jones Room in the Old Library recall the bishop who gave the Book of Kells to Trinity College Dublin (Photographs: Patrick Comerford, 2012)

I spent most of the working morning yesterday [Thursday] at an academic committee meeting in the Henry Jones Room in the Old Library in Trinity College Dublin.

The room is at the end of the Long Room and outside the building on my way in and my out there were queues and visitors waiting to see the Book of Kells, the library’s best-known treasure.

The name of the Henry Jones Room commemorates the Church of Ireland bishop who donated the Book of Kells to Trinity College Dublin.

The Book of Kells is a Latin copy of the four Gospels and probably dates from the late 8th century. However, it is not recorded at the Monastery at Kells, Co Meath, until 1007 after it was stolen and its covers were lost.

It appears to have been an altar book used for liturgical readings and for church ceremonies. Its full-page illuminations and its lavish embellishment make it distinguish it for other similar “insular” or Celtic manuscripts.

From the light-filled windows of the room, there are views south across the lawns to the Arts Block, and east towards the Front Square and the Chapel.

Looking across Front Square towards the Chapel from the Henry Jones Room in the Old Library in Trinity College Dublin (Photograph: Patrick Comerford, 2012)

On a window ledge in the room is a bust of William Magee (1821-1891), Archbishop of York. Among his memorable sayings is: “The man who makes no mistakes does not usually make anything.”

But the most interesting exhibits in the rooms are two plaques to Bishop Henry Jones himself, recalling his gift of the Book of Kells to TCD.

Below the older monument, a more modern plaque says:

“Sacred to the memory of the Reverend Henry Jones, Doctor of Sacred Theology, Vice-Chancellor of this University, who fitted out and enriched this library at his own expense with a most splendid staircase, windows, shelving, seats and other ornaments in the year 1651.

“This room was refurbished in 1992 with the generous assistance of the Friends of the Library.”

Henry Jones (1605-1682) was the eldest son of Lewis Jones, Bishop of Killaloe, and a nephew of James Ussher, Archbishop of Armagh and Chancellor of the University of Dublin at the beginning of the 17th century. Henry Jones was successively Bishop of Clogher (1645), Scoutmaster-General of Cromwell’s army in Ireland, and Bishop of Meath (1661).

In 1646, he was appointed Vice-Chancellor of Dublin University, and continued to hold onto that position during the Cromwellian era. After the Restoration of Charles II, it is said he gave the Book of Kells to TCD for safekeeping.

However, another account says the Book of Kells was sent to Dublin in 1653 by Charles Lambert, Earl of Cavan, for safekeeping. At the time, Lord Cavan was the Governor of Kells. The period between 1653 and 1661, when the Book of Kells was acquired by the Library, seems hazy, and is now some people in Kells are now asking whether Bishop Jones ever owned the Book of Kells or ever had the right to donate it to TCD.

When the meeting we admired that staircase, and walked through the book-lined Long Room before making our way back downstairs and out through the waiting queues in the autumn sunshine. 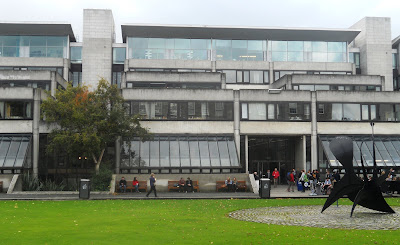 Looking across to the Arts Block from the Old Library in Trinity College Dublin (Photograph: Patrick Comerford, 2012)