Praying for a rainbow of hope for
refugees on Greek islands 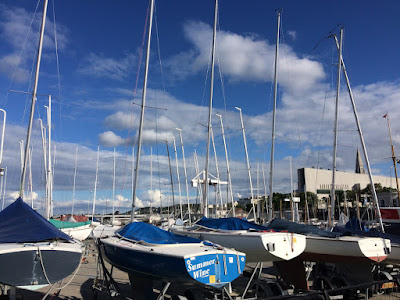 ‘Summer Wine’ … a promise of summer sunshine and a reminder of the Mediterranean in Dún Laoghaire late this afternoon (Photograph: Patrick Comerford, 2015)

Patrick Comerford
Between the showers of hail and rain this afternoon, there were snatches of sunshine, tastes of summer wine and promises of Mediterranean sun and sea.

As afternoon was turning into evening I went for a coffee in Dún Laoghaire and then for a stroll along the sea front behind the Royal Saint George Yacht Club.

The yachts moored safely in the harbour were like a tantalising promise of sunnier days ahead. And that the same time it was difficult not to think of the humanitarian crises on the seas in the Mediterranean, off the coasts of Italy and Greece.

Earlier in the afternoon, I had lunch in Corfu, the Greek restaurant in Parliament Street, Dublin, with a television producer who was interested in discussion his ideas for a new series. 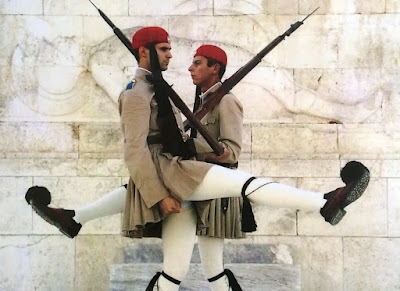 Evzones guarding the Tomb of the Unknown Soldier in Athens … an image in Corfu in Parliament Street, Dublin (Photograph: Patrick Comerford, 2015)

The walls around us were decorated with images of Greece, including Greek music, Greek movies, Greek poetry and photographs of the the Evzones (Εύζωνες, Εύζωνοι), the elite light infantry units who provide the Presidential Guard and the ceremonial units that guard the Tomb of the Unknown Soldier (Μνημείο του Άγνωστου Στρατιώτη), the Presidential Mansion (Προεδρικό Μέγαρο) and the gate of the Evzones camp in Athens.

These may have a predominantly ceremonial role, and are known for their uniform with the kilt-like fustanella. But they are a reminder too of the valour and bravery of the klephts, Cretans and Pontic fighters who struggled for Greek freedom and democracy in the 19th century.

Greek freedom and democracy are facing their toughest demands at present, and Greek valour is being grossly undervalued by many Europeans today, from German politicians to British tourists. 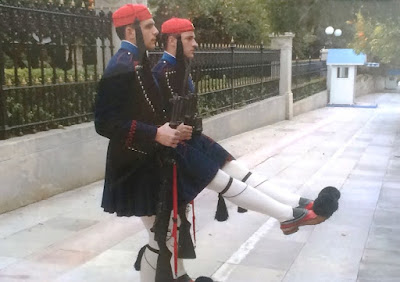 Greek freedom and democracy have come at a price … an image in Corfu in Parliament Street, Dublin (Photograph: Patrick Comerford, 2015)

In a scaremongering feature earlier this week, the Daily Mail claimed British tourists on the Greek island of Kos are complaining about asylum seekers ruining their holidays and turning the island into a “disgusting hellhole.”

The Mail claimed “penniless refugees have set up camp, sleeping on rubbish-strewn cardboard boxes. Summer break [is] a ‘nightmare’ for British holidaymakers, who won’t be coming back if it's a refugee camp next year.”

This is nothing less than callous display of disdain and a lack of compassion for people fleeing horrific conditions. The Daily Mail, Britain’s second most read paper, is stoking up fear and xenophobia when it should be displaying compassion and empathy.

Eva Cossé, who has just returned Kos, challenged the values of the Daily Mail and those tourists in a report for Human Rights Watch this week. In Kos, she met asylum seekers who had crossed by boat from Turkey to Greece, and she tells the stories of their own “disgusting hellholes.”

She interviewed men, women, and children fleeing war in Syria and pervasive violence and persecution in Afghanistan.

Nour, a young Palestinian from Syria, fled for fear of ISIS. He told her: “They kill people, cut heads, harm us psychologically. Once, I was walking at night and I stepped on something, grabbed it to see what it was, and felt some kind of hair. It was a head. That’s why we left.”

Mubarek left northern Afghanistan with his wife and three young sons because of the threat of the Taliban: “Every day the Taliban take people and children for suicide bombings. I was worried about my sons.”

Eva Crossé also heard about the grim conditions on Kos. There is no reception facility, so police take migrants and asylum seekers to an abandoned hotel with makeshift beds, limited running water, and no electricity. Others sleep in tents provided by Médecins Sans Frontières / Doctors Without Borders (MSF) , while still others are left on the streets.

“Believe me,” she said, “migrants and asylum seekers want to leave every bit as much as the intolerant British holidaymakers want to see them go.”

Earlier this week, she came across 1,000 migrants and asylum seekers waiting for police processing to get the necessary documents to travel on to Athens.

Nour, the young Palestinian, told her how a restaurant owner sprayed pesticide on him and his brother to force them to move away. As she was interviewing a group of Syrians near the police station, a shop owner came and shouted: “Go away, you are bothering the view of my tourists. Go back to your countries.”

She points out there is a lot Greece needs to do to set up a functioning reception system on the Aegean islands. She suggests the EU should support Greece more to ensure adequate shelter, food, and basic healthcare to those arriving at Europe’s door.

But then, of course, there is so much that the EU needs to do for Greece right now.

Eva Crossé concludes: “Yes, the reality of refugee suffering can dampen holiday fun. But these refugees have fled from one hellhole to another, and tourists should gain some perspective on – and hopefully show compassion for – these people who aren’t on the move seeking rest and relaxation, but rather to find refuge.” 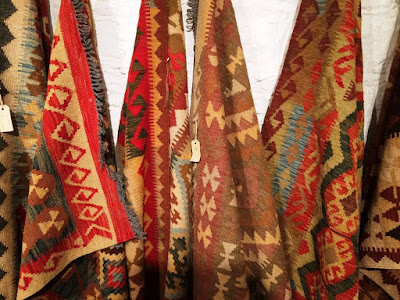 Between Corfu and Dún Laoghaire this afternoon, I was in the Blue Door in Monkstown buying a birthday present. But I was completely distracted by the colourful, distinctive handmade kilins from Afghanistan.

Hand-made kilins from Afghanistan are fashionable in northern Europe, and are beautiful to look at. But when those who make them seek refuge on our shores or in our holiday resorts, they are accused by the gutter press and tourists of turning our places of refuge into “disgusting hellholes.”

These double standards need to be exposed for precisely what they are. 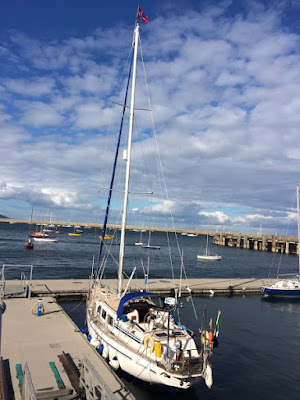 Thinking of the Mediterranean in a quiet moment at the harbour in Dún Laoghaire this afternoon (Photograph: Patrick Comerford, 2015)

As I walked back from the harbour at Dún Laighaire, I passed a collection of irises in a green patch beside Saint Michael’s Church. The Iris takes its name from the Greek word for a rainbow (Ἶρις). Perhaps a rainbow of hope will soon shine in dark clouds for the refugees who take great risks in the Mediterranean in their search for safety a future for their children. 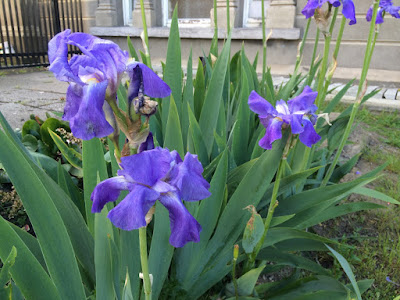 A bed of irises in Dun Laoghaire … who can offer a rainbow of hope to refugees in the Mediterranean (Photograph: Patrick Comerford, 2015)

Posted by Patrick Comerford at 21:16 No comments: