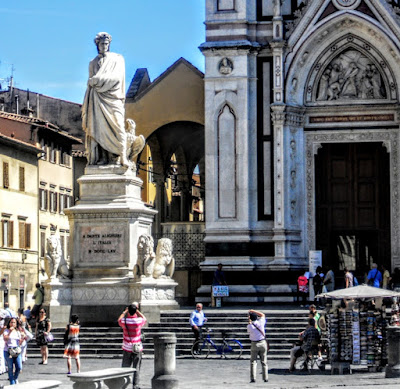 The Statue of Dante in the Piazza Santa Croce in Florence (Photograph: Patrick Comerford)

For the past few weeks, much of my work has involved preparing sermons and preaching and liturgical resources for this season of Advent. Over the four weeks of Advent this year, the themes each Sunday, in the readings, collects and Advent wreath, reflect the four themes that have become traditional in Advent: the Patriarchs and Matriarchs; the Prophets; Saint John the Baptist; and the Virgin Mary.

These four themes also run through other resources, such as the Prayer Diary from the Anglican mission agency USPG (United Society Partners in the Gospel) and the Advent and Christmas Devotional Calendar in Lichfield Cathedral, that I have been using in my reflections and prayers online each morning.

But for centuries, the Church used Advent to reflect not simply on the promise of a Birth, but to reflect on our mortality, our fragility and our limitations. This was traditionally been done through sermons on the Four Sundays of Lent on ‘The Four Last Things’: Death, Judgment, Heaven and Hell.

I have not reflected on any one of these ‘last things’ in the sermons I have prepared this year, although Saint Philip Neri once wrote, ‘Beginners in religion ought to exercise themselves principally in meditation on the Four Last Things.’

These sermon themes are traditional, but it is interesting how themes develop in traditions, for many of our concepts of Hell, for example, are based not on Scripture, and certainly not on the words of Christ, but have come to us through the writings of Dante, especially his Inferno.

Dante Alighieri (1265-1321), is the principal Italian poet of the Late Middle Ages. His Divine Comedy is the most important poem of the Middle Ages and the greatest literary work in Italian.

In his Inferno, Dante recounts a journey through the nine circles of hell passing gluttons, heretics and blasphemers before Cain and Judas and the other great traitors of history open the door leading to Lucifer, the arch-betrayer at the centre of hell. This is a powerfully poetic and arresting image of Hell as the ultimate religious torture chamber. It is a place of suffering, the land of eternal death.

A plaque on a wall in via della Ninna is a reminder of the former church in Florence where Dante was heard regularly (Photograph: Patrick Comerford)

Last week, while I was writing about Hanukkah, I was searching for photographs I had taken in Florence of Judith and Holofernes, a 15th century bronze sculpture by the Italian sculptor Donatello. It is in the Hall of Lilies (Sala dei Gigli) in the Palazzo Vecchio, and a copy stands in the sculpture’s original position on the Piazza della Signoria, in front of the Palazzo Vecchio.

I failed to find those photographs, but instead come across photographs of a number of statues and plaques in Florence, which celebrates its reputation as the birthplace of Dante.

The Uffizi Palace stands on the site of the Church of San Pier Scheraggio, once an important church that had a central role in the life in Florence: it was there that gonfaloniers and priors were elected, before the Palazzo Vecchio was built. In its naves, during several important assemblies, people like Dante and Boccaccio made their speeches.

When Giorgio Vasari built the Uffizi in 1560, the Church of San Pier Scheraggio was incorporated into the building, and today the former church is one of the Uffizi Gallery rooms.

A plaque on a wall in via della Ninna is a reminder of the former church:

‘You taught me how man makes himself eternal’ (Photograph: Patrick Comerford)

On another plaque, I came across these words from Dante that are among his best-known in Italian:

… my memory is fixed – and now
moves me – your dear, your kind paternal image
when, in the world above, from time to time
you taught me how man makes himself eternal!

Canto 15 in the Inferno begins with a description of the divine architecture of Hell, with Dante and Virgil walking together along one of the embankments.

This canto includes an encounter between Dante and his former teacher in Florence, Brunetto Latini (1220-1294). Brunetto died in 1294, when Dante was only 29. By the time he was writing Inferno 15, Dante’s life had gone terribly wrong. In the encounter with Brunetto, he is evoking a moment before his life took the tragic turn that left him stateless and dishonoured.

The dialogue between Dante and Brunetto in Inferno 15 recreates the intimacy and familiarity of the kind of conversation that Dante and his teacher might really have had. Inferno 15 is written in a style that is not ornate or highly wrought, but that creates beauty out of simple everyday language. It includes the magnificent ‘m’insegnavate come l’uom s’etterna’ (‘you taught me how man makes himself eternal’) in verse 85, quoted on this plaque in Florence. 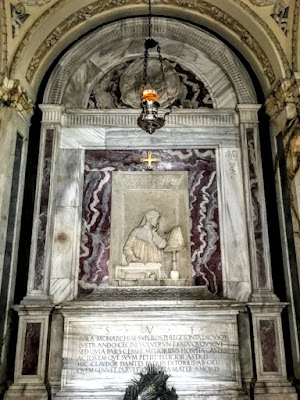 The Tomb of Dante, who died in 1321 on his way back to Ravenna from Venice (Photograph: Patrick Comerford)

After his exile from Florence, Dante’s own wanderings around Italy eventually brought him to Ravenna 700 years ago. He lived there from 1318, and the city is mentioned in Canto V in his Inferno.

His sepulchre was rebuilt in 1780, and a lamp there is kept alight with oil given by the city of Florence. However, it was only 10 years ago, in June 2008, that the city council of Florence passed a motion rescinding Dante’s sentence of exile – almost seven centuries after his death.

Dante’s depictions of Hell, Purgatory and Heaven provided inspiration for the larger body of Western art, and his journey in his Inferno has continued to influence art throughout the generations.

In Bologna, for example, the best-known and most splendid side chapel in the Basilica of San Petronio is the Chapel of the Magi, with its fresco of the Last Judgment.

This chapel once belonged to the Bolognini family. The south wall, decorated by Giovanni da Modena, is filled with the Last Judgment, the Coronation of the Virgin Mary and Heaven and Hell, inspired by Dante’s descriptions and with a gigantic figure of Lucifer.

Dante influenced John Milton, Geoffrey Chaucer and Alfred Tennyson and his Inferno also strongly influenced TS Eliot’s The Waste Land. In the first poem¸ The Burial of the Dead, a latter-day Dante walks the streets of London seeing death all around him:

I was neither
Living nor dead, and I knew nothing,
Looking into the heart of light, the silence.

A tomb was built for Dante in Florence in 1829, in the Basilica of Santa Croce. That tomb has been empty ever since, with Dante’s body remaining in Ravenna. The front of this tomb in Florence reads Onorate l’altissimo poeta, ‘Honour the most exalted poet,’ a quotation from the Inferno IV depicting Virgil’s welcome as he returns among the great ancient poets spending eternity in limbo. The following line, L’ombra sua torna, ch’era dipartita, ‘his spirit, which had left us, returns,’ is poignantly absent from his empty tomb. 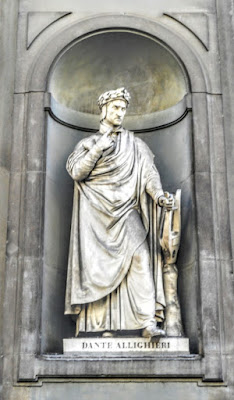 The Statue of Dante at the Uffizi in Florence (Photograph: Patrick Comerford)

Praying in Advent with USPG
and Lichfield Cathedral
(12): 12 December 2018 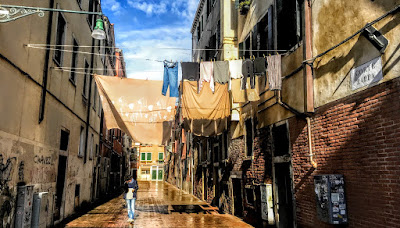 ‘Come to me, all you that are weary and are carrying heavy burdens, and I will give you rest’ (Matthew 18: 28) … alone in the rain on a back street in Venice (Photograph: Patrick Comerford, 2018)

Pray that the appointment of the Right Revd Marinez Rosa dos S Bassotto as Brazil’s first woman bishop might spearhead an end to violence and discrimination against women in Brazil. 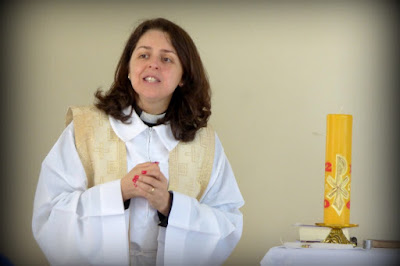 Bring all your tiredness and weariness to Christ and ask him to hold you and all you carry today.