A journey through Lent 2016
with Samuel Johnson (2) 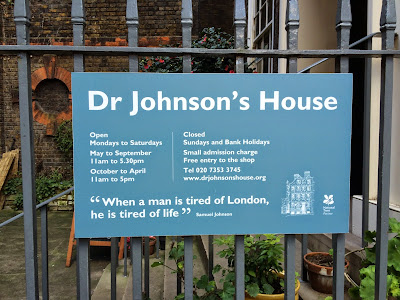 Samuel Johnson once declared: “Why, Sir, you find no man, at all intellectual, who is willing to leave London. No, Sir, when a man is tired of London, he is tired of life; for there is in London all that life can afford.”

Reading over today’s agenda and anticipating the discussions, I imagine too when one tires of demanding social justice, one is tired of life.

Johnson said: “By seeing London, I have seen as much of life as the world can show.” So, what should I be looking for in London today on my way to and from this meeting? Johnson’s biographer, James Boswell, quotes this pious Anglican of the 18th century as saying:

Sir, if you wish to have a just notion of the magnitude of this city, you must not be satisfied with seeing its great streets and squares, but must survey the innumerable little lanes and courts. It is not in the showy evolutions of buildings, but in the multiplicity of human habitations which are crowded together, that the wonderful immensity of London consists.