‘Batter my heart, three-person’d God; for you
As yet but knock; breathe, shine, and seek to mend’ 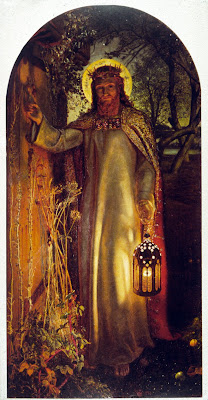 ‘Be dressed for action and have your lamps lit; be like those who are waiting for their master to return … so that they may open the door for him as soon as he comes and knocks’ (Luke 12: 35-36) ... Holman Hunt’s ‘The Light of the World’

The Eleventh Sunday after Trinity,

Have you ever been burgled?

It is a frightening and a traumatic experience for anyone who has suffered it.

It is one thing to come home from a day’s work, or from a holiday, to find your house has been broken into. It is another to wake up and realise that as you were sleeping a thief has broken into your home, and is downstairs or in the next room.

It happened to us once, in another house we were living in.

It was in the days before mobile ’phones and cordless ’phones. I had been working late the night before and came downstairs to answer a mid-morning call.

Unknown to me, the thieves were in the next room, having already gone through our kitchen. They were in there, having made themselves something to drink, had cut the lead to the video recorder, and were squatting on the floor, armed with the kitchen devil straight from the cutlery drawer, sorting through our other possessions.

They must have remained very quiet. Instead of stealing our goods, they stole out the back door before I ever put the ’phone down or realised what had happened.

It is a frightening experience, and it made us extra vigilant: extra bolts and locks, rethinking the alarm system, and so on. The police knew who the “likely suspects” were, but, you know, they can never guarantee that you are never going to be broken into again … and again.

And so, the image of Christ we come across at the end of this morning’s Gospel reading, of a thief coming unexpectedly to break into my house, may not be a very comforting one for those of us brought up with the image of “Gentle Jesus, Meek and Mild.”

And yet it is an image that has echoes in the poetry of some of the great mystical writers in Anglican history. It reminds me, for example, of the words of John Donne (Holy Sonnets XIV):

Batter my heart, three-person’d God; for you
As yet but knock; breathe, shine, and seek to mend;
That I may rise, and stand, o’erthrow me, and bend
Your force, to break, blow, burn, and make me new.
I, like an usurp’d town, to another due,
Labour to admit you, but O, to no end.
Reason, your viceroy in me, me should defend,
But is captived, and proves weak or untrue.
Yet dearly I love you, and would be loved fain,
But am betroth’d unto your enemy;
Divorce me, untie, or break that knot again,
Take me to you, imprison me, for I,
Except you enthrall me, never shall be free,
Nor ever chaste, except you ravish me.

It is the passionate language of love, of passionate love. But then, of course, Christ demands our passion, our commitment, our love.

The inner circle of the Disciples must have felt they were being broken into by those on the rims, those in the crowd of outsiders, the crowd or multitude following Jesus but who were not among the Disciples.

So Christ’s demands are made not just of some inner circle, for some elite group within the Church, for those who are seen as pious and holy.

We are to be ever vigilant that we do not keep those on the margins on the outside for too long. They may appear like thieves trying to break in. But when we welcome in those on the outside who we see as thieves, we may find we are welcoming Christ himself.

And in welcoming Christ himself, into our inner sanctum, we are making it a sign of the Kingdom. The Church needs to be place not where we feel secure, but where the outsider feels welcome, where they can feast and taste what the Kingdom of God is like.

When shall we find it?

My favoured translation of the Bible, the New Revised Standard Version (NRSV), says “it is your Father’s good pleasure to give you the kingdom” (Luke 12: 32), present tense. But the original Greek says “your Father was well pleased with you (or, took pleasure) to freely give the Kingdom to you” … ὅτι εὐδόκησεν ὁ πατὴρ ὑμῶν δοῦναι ὑμῖντὴν βασιλείαν.

God wanted to do something good for the “little flock” (verse 32), and so freely gave them the kingdom – the reign of God – in which tables are open, status is upended, and all people are treated with dignity. In God’s Kingdom – on earth as it is in heaven – there is no scarcity, there are no class or gender barriers, there are no ‘insiders’ and no ‘outsiders’.

Jesus compares that Kingdom of God with a wedding banquet.

When we go to a wedding, we have no control over what happens. In the first case, we have, thankfully, no control over who is getting married to whom. But, secondly, weddings break down all our petty snobberies and all our status-seeking.

It’s enough to make you laugh.

Sarah laughed when she was told about her future family (see Genesis 18: 12). There is a hint of that story in our Epistle reading this morning, when the writer reminds us of the faith of Abraham and Sarah (see Hebrews 11: 11, 13-16).

Once again, verse 11 is badly translated in the NRSV, for the Greek actually tells us that it is Sarah’s unexpected faith, even in her poverty and in her marginalisation, that brings unexpected and over-abundant blessings.*

In the Genesis story, it is actually only Abraham who says he was a stranger and a foreigner. But here both Abraham and Sarah are credited with the faith that underpins this realisation (see Hebrews 11: 13).

God’s promise of the Kingdom multiplies beyond all our expectations, even beyond the expectations of modern Bible translators.

But we may find that the thief is actually Christ trying to break into our hearts to let us know that the kingdom is already here.

The word for master here is actually κύριος (kyrios), Lord, the word used in the Greek Old Testament for the Lord God by Jews who found the use of the name of God offensive and blasphemous. But using the word master for κύριος hides away God’s work, confusing the Lord, the “Son of Man” (ὁ υἱὸς τοῦ ἀνθρώπου, ho yios tou anthropou), with the “master of the house,” the householder (οἰκοδεσπότης, oikodespótēs). 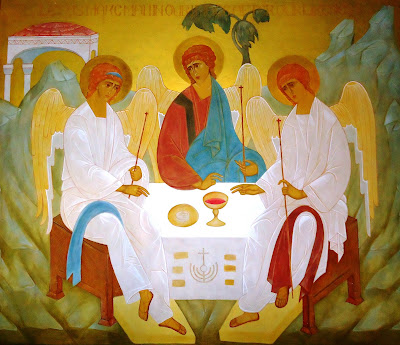 The Hospitality of Abraham ... a modern interpretation of Rublev’s icon of the Holy Trinity, on the walls of the breakfast room in the Monastery of Saint John the Baptist in Tolleshunt Knights, Essex (Photograph: Patrick Comerford, 2013)

Think of how the word κύριος (kyrios), Lord, was used by Abraham as he addressed the three visitors to Abraham and Sarah at the Oak of Mamre. The strangers become angels, and the angels come to represent the Triune God.

Had Abraham treated his visitors as thieves, where would we be today? Instead he sets a banquet before the Three, and finds not once but three times that he has an encounter with the living Lord (Genesis 18: 3, 13, 14), the Triune God, an encounter that leads Abraham and Sarah to a faith that ushers in the promises of the Kingdom.

The Lord who arrives for the banquet and stands knocking at the door (Luke 12: 36) in this morning’s Gospel reading is the same Christ who says: “Behold, I am standing at the door knocking; if you hear my voice and open the door, I will come into you and eat with you, and you with me” (Revelation 3: 20).

He comes in ways we do not expect, and at “the unexpected hour,” the time we “think nothing of” (ἧ ὥρᾳ οὐ δοκεῖτε, he hora ou dokeite, Luke 12: 40) – “an hour that seems like nothing.” He does not bother trying to tear down our puny defences. He sneaks around them instead.

Welcome to the banquet.

Welcome to the kingdom.

Allow the stranger among you, and the stranger within you, to open that door and discover that Christ is not a thief trying to steal what you have, but is the Lord who is trying to batter our hearts and tear down our old barriers so that we can all feast together at the new banquet:

Batter my heart, three-person’d God; for you
As yet but knock; breathe, shine, and seek to mend;
That I may rise, and stand, o’erthrow me, and bend
Your force, to break, blow, burn, and make me new.
…
Take me to you, imprison me, for I,
Except you enthrall me, never shall be free,
Nor ever chaste, except you ravish me.

The NRSV translates this:

By faith he received power of procreation, even though he was too old – and Sarah herself was barren – because he considered him faithful who had promised.

But it would be more accurate to translate this is as:

By faith also, Sarah herself, a barren woman, received the ability to establish a posterity beyond normal age, since she was considered the faithful one who had promised. 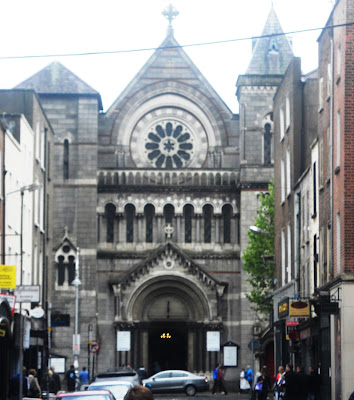