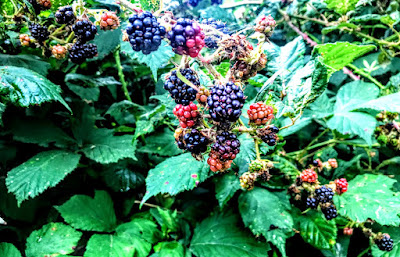 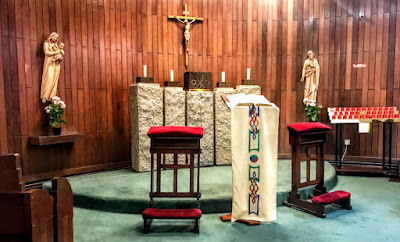 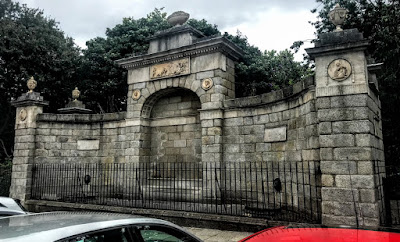 The Rutland Fountain on the west side of Merrion Square, facing the National Gallery, was erected in 1791-1792 (Photograph: Patrick Comerford, 2018)

The Rutland Fountain stands on the west side of Merrion Square, facing the National Gallery, and almost opposite Leinster House and Government Buildings. It was built in 1791-1792 from plans designed by the architect Francis Sandys.

The fountain was erected to commemorate a former Lord Lieutenant of Ireland, Charles Manners (1754-1787), 4th Duke of Rutland. As MP for Cambridge University (1774-1779), he vehemently opposed the taxation of America. At he age of 25, he succeeded his father as Duke of Rutland in 1779, and he was appointed the Viceroy or Lord Lieutenant of Ireland in 1784, before he had reached the age of 30.

Despite some early political failures, Rutland was increasingly popular as viceroy, in part because of his convivial nature and ample banquets at Dublin Castle. Rutland gave his name to Rutland Square, now Parnell Square in Dublin, and to similarly named streets in Dublin, including Granby Row, recalling the title of Marquess of Granby by which he was known before succeeding as Duke of Rutland.

Granby Row was the original name of the west side of Rutland Square, now Parnell Square, while the east side was known as Cavendish Street and then Cavendish Row. When the square was named Rutland Square in 1785, the name of Granby Row was transferred to the former Palace Row. Rutland Place is a stable lane off North Great George’s Street, and there is a Rutland Street in the area too.

In Limerick, both Rutland House and Rutland Street are also named after the Duke of Rutland, recalling his visit to Limerick as Lord Lieutenant in 1785.

The Irish historian, politician and wit, Sir Jonah Barrington (1756-1834), in his Historic Memoirs of Ireland, recalls that Rutland and his wife ‘were reckoned the handsomest couple in Ireland.’

The enthusiasm and support of the Duke of Rutland encouraged James Gandon as he was building the Four Courts on the Quays in Dublin. Rutland’s coat-of-arms can also be seen on the Cavendish Row pediment of the Gate Theatre in Parnell Square, alongside the star of the Order of the Knights of Saint Patrick.

Rutland made an extended and demanding tour of the midlands and north of Ireland in summer 1787. But by then, his excessive consumption of claret was taking a toll on his health. He died of liver disease on 24 October 1787 at the Vice-Regal Lodge in the Phoenix Park, Dublin, now Áras an Uachtaráin, the official residence of the President of Ireland.

The medallion depicting the Duke of Rutland on the Rutland Fountain on Merrion Square (Photograph: Patrick Comerford, 2018)

The Rutland Fountain in Merrion Square is the most impressive monument to his memory in Dublin. But, while many Dubliners know Granby Row and may have heard of Rutland Square and Rutland Street, they often miss out on the Rutland Fountain, perhaps because it is fenced off, traffic clutters the view from the street, water no longer flows through the fountain, and the principal sculpture has been missing for many years.

The monument still displays many friezes with images of the family of the Duke of Rutland’s family.

The fountain, officially the ‘Duke of Rutland Memorial Fountain,’ was commissioned before his death by the duke ‘to provide drinking water for the city’s poor.’ It was designed by the architect Francis Sandys, and built in 1791-1792 by Arthur Darley, one of the stonemasons who worked on the Custom House.

The Dublin-based architect Francis Sandys studied drawing with Robert West, and from the 1770s he worked from Dawson Street. He died in 1795 at Bellevue, Co Wicklow, where he had designed a Gothic banqueting room and a Turkish tent for the banker Peter La Touche.

The central figurative relief shows a younger Duke of Rutland as Marquess of Granby, relieving a distressed soldier and his family (Photograph: Patrick Comerford, 2018)

The fountain is built in granite with Portland stone dressings. It has a central, tall blind arch flanked by segmented screen walls that end in piers. The piers are surmounted by Coade stone urns.

Above the arch, the central figurative relief shows a younger Duke of Rutland as Marquess of Granby, relieving a distressed soldier and his family. All the figures on this relief are now headless.

There are four relief medallions, made by Eleanor Coade (1733-1821) in 1791. The Exeter-born sculptor Elizabeth Coade was known for her neoclassical statues, architectural decorations and garden ornaments. She produced stoneware for Saint George’s Chapel, Windsor, the Royal Pavilion, Brighton, Carlton House, London and the Royal Naval College, Greenwich. 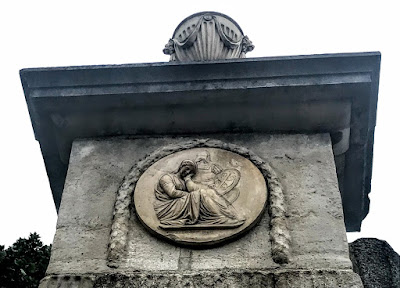 A mourning woman with armour … one of Eleanor Coade’s figures on the Rutland Fountain (Photograph: Patrick Comerford, 2018)

Many of the figures in the roundels that adorn the fountain have been vandalised and damaged since it was built over 200 years ago and the water element has been cut off.

In its original form, the Rutland Fountain functioned as a supply of water to the poor. Water poured from two bronze lion heads on either side and from a small central conduit water flowed into a large stone conch shell at the base of the fountain.

The middle conduit was to the left of the recess and formed an arm rest for a life-size figure of a water nymph made of Coade stone. 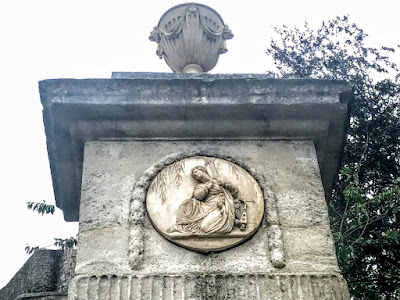 Hibernia as a woman with a harp … one of Elizabeth Coade’s figures on the Rutland Fountain (Photograph: Patrick Comerford, 2018)

The inscription below, carved by Michael Biggs, reads:

‘The Duke of Rutland Memorial Fountain 1791. This fountain was restored by the Corporation of Dublin as part of its contribution to European Architectural Heritage Year 1975. The project was assisted by generous donations from friends of Sybil Le Brocquy 1892-1973 whose enthusiasm for life, literature and the arts enriched many lives.’ 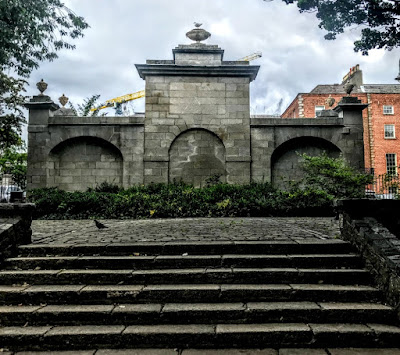 The rear of the Rutland Fountain, seen from inside the park in Merrion Square (Photograph: Patrick Comerford, 2018)

In its full glory, water poured from the two bronze lion heads on either side and from the small central conduit water flowed into a large stone conch shell at the base of the fountain. Many of the figures in the roundels have been vandalised and damaged since it was built over 200 years ago and the water supply has long been cut off.

The west side of Merrion Square was given a facelift in 2008 in preparation for the unveiling of a new memorial to members of the Defence Forces who died in service, and work began on restoring the Rutland Fountain in 2009.

When the fountain was cleaned up and restored, however, none of the missing features was restored and the water was not turned back on again, and there are no plans to restore the Rutland Fountain to its original glory.

Because the fountain has been dry for several decades and the central figure is missing too, many people in Dublin think the Rutland Fountain was originally built either as a triumphal arch or as a gateway. In recent years, Dublin Corporation actually discussed plans in 2015 to turn the central arched recess into a new gateway into the park at Merrion Square. 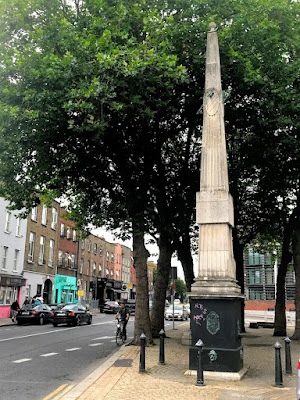 A second fountain in Dublin associated with the Duke of Rutland is the obelisk and fountain at Saint James’s Street, the oldest public monument on the street. The fountain is in a triangular traffic island, close to the former Saint James’s Church, and it can be glimpsed from the Luas line as it takes a sharp turn, between the Heuston and Saint James’s Hospital stops.

This fountain, erected in 1790, was also commissioned by Rutland and designed by Francis Sandys. This fountain is an obelisk with four sundials with a drinking fountain at its base.

It was restored in 1995 by Dublin City Council with assistance from Guinness Ireland and the Ireland Fund of Canada. Sadly, the fountain no longer works, but I understand the sundials have been realigned, and the fountain is once again an elegant feature in this part of Dublin. 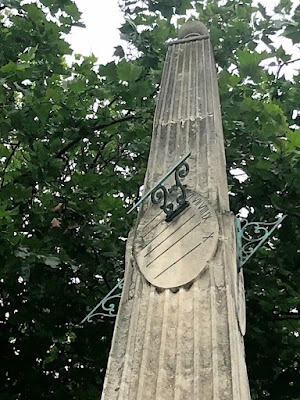 The sundials on the Rutland Fountain and Obelisk in James’s Street, Dublin (Photograph: Patrick Comerford, 2018)