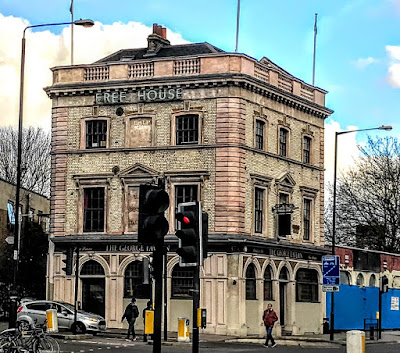 The George Tavern … on the site of an inn mentioned by Chaucer (Photograph: Patrick Comerford, 2018)

I have been a fan of EastEnders for many years. The long-running BBC soap, which began in 1985, is set in the fictional East End borough of Walford. The key venues include Albert Square, the local pub the Queen Victoria, and the local market on Bridge Street.

The buildings, characters and storylines could all fit into the East End where I was staying this week during the residential meeting of the trustees of the Anglican mission agency USPG (United Society Partners in the Gospel), although in real life Stepney, Whitechapel and Limehouse are more culturally and ethnically mixed than the cast of EastEnders.

In recent storylines, property developers Grafton Hill and Weyland & Co acquire the freehold interest in the Queen Vic as part of their plans to redevelop the area, in which the Queen Vic would be turned into apartments.

It is a storyline that has been experienced throughout the East End. Many traditional pubs, such as the King’s Arms and the Ship on Cable Street, have closed, been sold and converted into apartments and office space.

Close by, and close to the Royal Foundation of Saint Katharine, where I was staying this week, the George Tavern is a Grade II listed public house and music venue on Commercial Road owned by the artist Pauline Forster.

The story of the campaign to save the George is one that brings to life this storyline in EastEnders.

The George Tavern stands on a prominent corner site in the East End, at the corner of Commercial Road and Jubilee Street. It was once known as the Halfway House, and the building incorporates original brickwork that is said to be 700 years old.

The inn is mentioned down the centuries by Geoffrey Chaucer, Samuel Pepys and Charles Dickens. Geoffrey Chaucer refers to the Halfway House in The Reeve’s Tale, written in the 1380s when he lived above the gate at Aldgate. Samuel Pepys recorded numerous visits here in the 1660s.

The George Tavern was built on the site of the Halfway House, believed to be of mid-17th century origin. Map evidence shows that the Halfway House was rebuilt in the 18th century, some time after 1745, about 50 metres north-east of the earlier inn.

The present building was probably built between 1820 and 1825 and first appears on Greenwood’s map in 1827. The pub therefore forms part of the development of Commercial Road, which was created following the Commercial Road Act of 1802 to link the newly built East India Docks and West India Docks to the boundary of the City of London. A narrow yard labelled Aylward Street behind the pub, now used as a garden, is all that remains today of the old road that once brought all the trade to the Halfway House.

In the 1960s, a nightclub, Stepneys, was added in a building that backs onto the pub. The nightclub was famous for its illuminated dance floor, it was mentioned by the Rolling Stones in ‘Play with Fire,’ and countless concerts and parties took place over the years in the building.

The pub received a Grade II listing in 1973 because it is a handsome corner public house with well-detailed Italianate elevations dating the work in 1862, because it has a strong townscape interest, because it still had many of earlier features from the remodelling of the building in the 1820s, and because of the fine ornate tiling in the bar, presumed to date from the 1891 remodelling.

This corner building has two principal elevations to Jubilee Street and Commercial Road. It is painted brick building with stucco dressings, and a modillion cornice under the balustraded parapet in front of the M-roof.

The doors and windows at the front are set in a continuous arcade with round-headed arches separated by panelled pilasters, with three bays to the west elevation and four to the east, the last bay with a broader, elliptical arch. The arches have decorative floral motifs in bas relief, keystones and cast-iron openwork spandrels. There is a bracketed cornice above the ground floor.

Originally there was a yard to the rear of the pub, but this has been built over. There may have been vaults in the past, and interesting surviving details include an 18th century staircase, ornate Victorian tiling in the bar and 19th century parish boundary stones.

In 2002, the artist Pauline Forster bought the derelict building at auction and spent the next decade transforming the George into an arts, music and performance venue with an international reputation.

Since then, the George Tavern has played host to a number of musical acts, including the Magic Numbers, Kodaline, John Cooper Clarke, Nick Cave, Anna Calvi and Sir Roger Penrose. It continues to host live music on most nights of the week. It has also played host to a number of artists who have used the George Tavern as a photo shoot or film location. The venue has also hosted photo shoots for Kate Moss, Georgia Jagger, Justin Timberlake, Grimes, Amy Winehouse and Grace Jones.

The original plot was split at the auction in 2002, and the nightclub Stepneys was sold to a landlord, who then sold it to Swan Housing Association. In 2008, Pauline Forster became involved with a lengthy dispute with Swan Housing Association, and the future of the George Tavern as a live music venue came under threat from property developers who had bought the adjoining site.

The developers submitted a number of plans to build luxury apartments next to the pub. If the flats are built, the venue will most probably be forced to stop live music events.

About 6,000 people signed two petitions and the campaign to save the George generated positive local and national media coverage. A host of celebrities including Sir Ian McKellen, Plan B, Jo Whiley, and Ricky Wilson of the Kaiser Chiefs and BBC’s the Voice supported the campaign.

The George was successful in the Court of Appeal, which ruled in favour of Pauline Forster. But new plans for a residential development were submitted. Recently, the appeal against the refusal to grant planning permission was dismissed by the Secretary of State for Communities and Local Government.

James Ketchell of Music Heritage UK said, ‘Common sense has prevailed. This is a musical ‘oasis’ in a cultural desert – it should be protected to provide east London with an eclectic and diverse musical offering.’

Beverly Whitrick of Music Venue Trust said, ‘The George is a grassroots music venue, vital to the development of new music in London and a cultural and community asset. This decision will help other venues by demonstrating that assembling a strong case with evidence about the potential impact of living next to a music venue can determine whether a development is reasonable or not.’

But, while the proposal to build houses next to the George Tavern has been rejected, Swan Housing Group still has the option to go back to the High Court. The proposed housing would almost certainly lead to complaints and restrictions on the George Tavern’s license. It will be interesting to see whether this pub, which is of architectural, historical and cultural interest, can continue to survive the plans of developers. 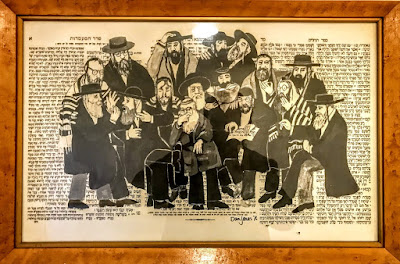