Comerford profiles: did this
Richard Comberford ever
move from Lichfield to Ireland? 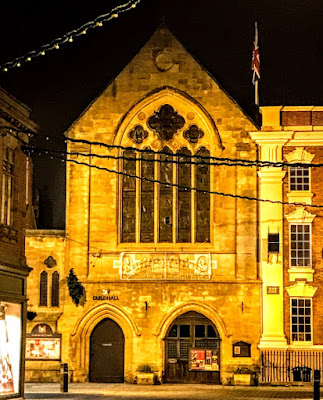 The Guildhall in Lichfield … four generations of the Comerford family were members of the Guild of Saint Mary and Saint John the Baptist, including Richard Comberford’s wife Isabella (Photograph: Patrick Comerford)

Joseph Comerford’s pedigree registered in 1724, and the pedigree compiled at the College of Heralds in 1786 for the Countess of Crequy, claim the Comerford families of Co Kilkenny and Co Wexford are descended from Richard Comerford.

But who was this Richard Comberford, and, whether he ever came to Ireland, what his career in England, and where does he fit in the story of the Comberford family of Comberford Hall?

(Judge) Richard Comberford (ca 1512-post 1547), was born ca 1512, a younger son of Thomas Comberford who died in 1532 and his wife Dorothy Fitzherbert. He was the ancestor of the Bradley branch of the family, but he was also claimed as the putative ancestor of the Comerford family in south-east Ireland.

Within a few years, William Comberford’s son, John Comberford (ca 1426-1508), as ‘Joh’s Cumberforde,’ was admitted to membership of the Guild of Saint Mary and Saint John the Baptist in 1476. The guild acted as the city government until Lichfield received a charter.

Thomas Comberford was the third generation of his family to become involved in the governance of Lichfield when, as M’r Thomas Cumberforth, was admitted to membership of the Guild in 1495.

We have a good account of Thomas Comberford’s land holdings in Lichfield and the surrounding area around the year 1525, when John Archard, Master of Saint Mary’s Guild, recorded the land holdings of the guild on the outskirts of the city. He provides a thorough account of the neighbouring estates held by Thomas Comberford, particularly in Wall and Wigginton. In that account, Archard spells the family’s name variously as Comberfort, Combyrford, Combyrforde, Combyrfort, Cumberforde, Cumberforte and Cumbyrford.

Thomas Comberford’s son, Richard Comberford, the putative ancestor of the Irish branch of the family, was born ca 1512. His records at Cambridge note that he was born at Comberford, Staffordshire. In all, three Comberford brothers, Humphrey, Henry and Richard, benefited from the terms of a bequest from John Bayley, who had funded a fellowship at Saint John’s College, Cambridge, stipulating that preference be given to men from Tamworth.

His eldest brother, Humphrey Comberford (ca 1496/1498-1555) of Comberford Hall and the Moat House on Lichfield Street, Tamworth, was educated at Cambridge (BA 1525, MA 1528). However, his principle commercial interests were in Lichfield, and he was the fourth generation of the family to be involved in the civic governance of Lichfield when he became the Master of Guild of Saint Mary and Saint John the Baptist in 1530. 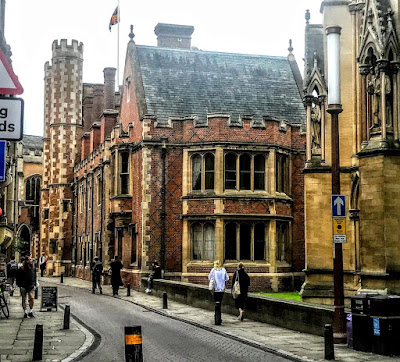 Saint John’s College, Cambridge … Richard Comberford was a Fellow and Senior Bursar, but did he ever move to Ireland? (Photograph: Patrick Comerford)

Richard Comberford, who was born ca 1512, married Isabel Biggs before going to Cambridge. As ‘Dame Isabella Cumberforde,’ she was admitted to membership of the Guild of Saint Mary and Saint John the Baptist in Lichfield in 1530, in the year her brother-in-law, Humphrey Comberford, was the Master of the Guild.

Richard Comerford was admitted to Saint John’s College, Cambridge, on 8 April 1534, and became a Fellow of Saint John’s College that year. He proceeded MA in 1537, and, like other members of his family at the time, he was known for his Catholic sympathies during the Tudor Reformation.

In his history of Saint John’s College, Peter Linehan notes that ‘the Fellows were constitutionally quarrelsome.’ Richard Comberford was one of two fellows of Saint John’s, along with Richard Swayne, who led a conspiracy of regent masters in 1539 to take control of the Senate House in Cambridge and to stop an adjournment of the election of William Buckmaster of Peterhouse, former Lady Margaret’s Professor of Divinity (1532, 1534), as the Vice-Chancellor of Cambridge.

When Comberford gave the signal, ‘nowe playe the men and I will begyne,’ Swayne barred the doors and there was a rush to assault Dr Geoffrey Glynn, who was presiding over the assembly.

Nevertheless, Richard continued as a fellow of the college’s seven seniors in 1542, and he was the Senior Bursar of Saint John’s in 1542-1544.

A senior barrister, after leaving Cambridge Richard Comberford was a serjeant-at-law or servillus ad legem, according to the Visitation of Staffordshire. He held one of the highest judicial posts as the King’s Remembrancer from about 1547.

Richard Comberford of Cambridge and his brother John Comberford both leased lands at Much Bradley in Staffordshire from Saint John’s College.

Richard and Isabel Comberford were the parents of a son and two daughters:

1, Dorothy, who married Edward Bulkeley.
2, Elizabeth, who died in childhood.
3, Francis Comberford, who was the ancestor of the Comberford family of Bradley.

Richard Comberford has sometimes been named incorrectly as the father also of:

Richard Comberford has often been confused by 18th century genealogists with Richard Comerford of Ballybur, Co Kilkenny, and so in a confused way, the Comberford and Comerford family trees became entangled.

Joseph Comerford’s pedigree registered in 1724, and the pedigree compiled at the College of Heralds in 1786 for the Countess of Crequy, make an even more fantastic claim, saying Richard moved to Ireland and became Lord of Ballymacken and Danganmore, Co Kilkenny, through his marriage to Mary, daughter and heiress of Allen de Comerford, last Baron of Danganmore, said to have died in 1504, and niece of Edmond Comerford, Bishop of Ferns, who died in 1509.

According to these Irish pedigrees, Richard Comberford and his wife Mary Comerford were the parents of:

Of course, these pedigrees are of a fantastical nature, composed to boost the claims of 18th century members of the family, and are totally unreliable. Yet they show how the family claims to links with Staffordshire continued to be part of family lore down through the centuries. 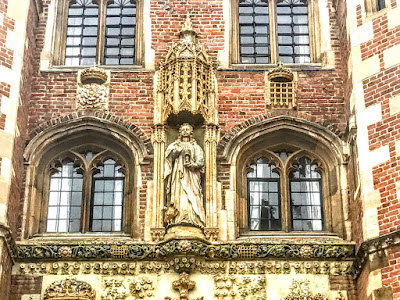 Saint John the Evangelist at Saint John’s College, Cambridge … Richard Comerford was Senior Bursar at a time he was said to be living in Co Kilkenny (Photograph: Patrick Comerford)