Kilmacduagh Cathedral,
its monastic churches, and
Ireland’s tallest round tower

The cathedral and monastic ruins at Kilmacduagh, Co Galway … sometimes referred to as ‘the seven Churches’ (Photograph: Patrick Comerford, 2021)

Since I arrived in the Diocese of Limerick and Killaloe in early 2017, I have tried to visit each of the eight cathedrals that given their names to this long-named diocese.

Saint Colman founded his monastery at Kilmacduagh, about 5 km south-west of Gort, on land given by his cousin, King Guaire Aidne mac Colmáin of Connacht, in the early seventh century.

This site on the edges of the Burren District gave rise to the Diocese of Kilmacduagh and it has several churches and a well-preserved but leaning round tower that is over 30 metres high.

The site includes the ruined cathedral, Saint John’s Church, Saint Mary’s Church, the ruins of an Augustinian Church, the Glebe House, which may have been the residence of the abbots and bishops of Kilmacduagh, and Ireland’s tallest round tower.

The name Kilmacduagh means ‘the church of Duagh’s son.’ Saint Colman, the son of Duagh, was the first abbot or bishop of the monastery until his death ca 632. His feast day is celebrated on 29 October, but the date of the monastic foundation is uncertain.

The names of his successors, apart from Indrect, who died in 814, until the Anglo-Normans arrived, have not survived in the Annals.

The ruins of the monastery are sometimes referred to as ‘the seven Churches.’ However, not all of these buildings were actually churches, and none of them dates back to the seventh century. 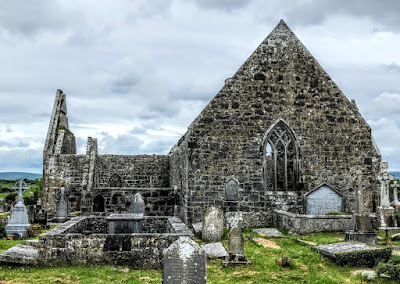 The East End of Kilmacduagh Cathedral … the cathedral acquired its present shape in the 14th and 15th centuries (Photograph: Patrick Comerford, 2021)

The main buildings at Kilmacduagh are: 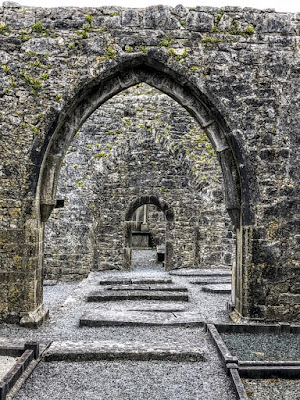 Inside the cathedral ruins in Kilmacduagh (Photograph: Patrick Comerford, 2021)

1, The abbey church and former cathedral:

The present, cruciform cathedral is 29.2 metres long and 6.8 metres wide. It dates from the 11th or 12th century, but is the result of rebuilding much of the earlier cathedral in the 14th and 15th centuries. The building seen today is a mixture of Romanesque, Gothic and Tudor styles.

The west wall of the nave dates from the 11th or 12th century, but incorporates a blocked tenth century doorway below a three-light Tudor window with some zig-zag carving.

The rest of the nave was built in the 12th century when the cathedral was enlarged. The south wall has a Romanesque lancet, a Gothic arch leading to the south transept, a small lancet window and a low Gothic entrance door.

The north wall has a blocked flat-arch early doorway leading to the north transept has been blocked up but contains a small round-headed doorway.

The south wall also has a replacement Gothic window. Beside this, a doorway leads to what may have been a sacristy. It has one round-arch window in the south gable.

The cathedral became cruciform in shape when the transepts were added in the 14th and 15th centuries. The 15th century south transept has Gothic windows in the south and east walls. 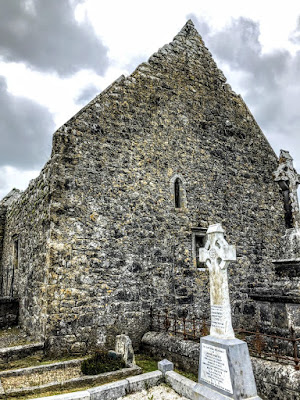 The north transept was probably added in the 14th century (Photograph: Patrick Comerford, 2021)

The north transept was probably added in the 14th century. It has square Tudor windows in the east and west walls and a narrow window in the north wall. This transept is sometimes known as the O’Shaughnessy Chapel, and has a number of tombs, from the 16th to the 18th century, of members of the O’Shaughnessy family, who were lay patrons of the cathedral, including wall tomb of Sir Dermot O’Shaughnessy.

The cathedral is surrounded by a graveyard still used by local people. 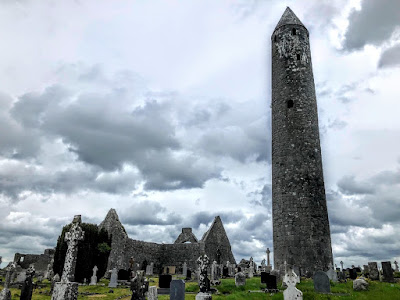 The round tower at Kilmacduagh is Ireland’s tallest round tower (Photograph: Patrick Comerford, 2021)

The round tower, about 15 metres south-west of the cathedral, is 34.3 metres high and is Ireland’s tallest round tower. This tower probably dates from the tenth century. This is also a leaning tower, leaning 38.3 cm from the vertical towards the south-west.

The walls of the tower are almost 2 metres thick at the base, and the tower has a diameter of over 5.5 metres. But the foundations are only 60 cm deep. The doorway is 8 metres above ground level. There are a total of 11 angle-headed windows present in the tower, some of which have been restored. 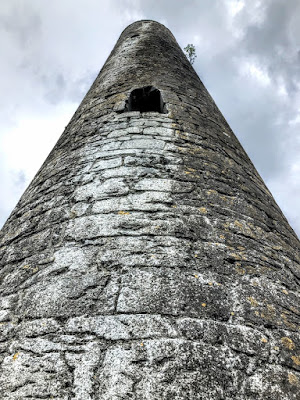 The conical cap collapsed in 1859 and was restored in 1878-1879, when the round tower was repaired under the supervision of Sir Thomas Deane, with financial support from Sir William Henry Gregory of Coole Park. The tower was repointed in 1979. 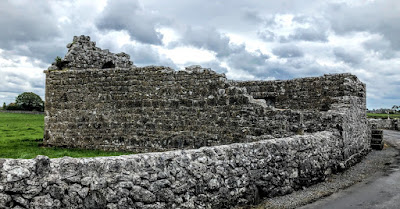 Saint Mary’s Church is on the east side of the road driven through the site in the 18th century (Photograph: Patrick Comerford, 2021)

Saint Mary’s Church, also known as ‘The Lady’s Church,’ is on the east side of the road that was driven through the monastic site in the 18th century.

Saint Mary’s Church is a plain 13th century church, thought to have been builtca 1200, using blocks of stone from an earlier church. 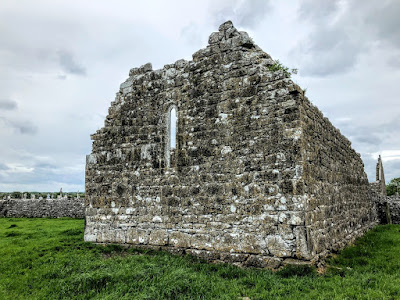 This is a single-chamber church, 12.6 metres long and 5.7 metres wide.

The doorway on the south side was inserted in the 15th century. There is a round-headed, single narrow lancet in the east gable. 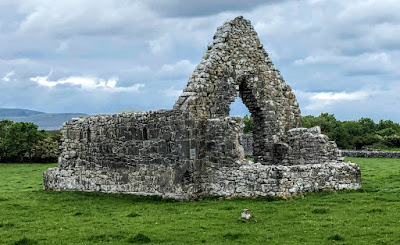 The Church of Saint John the Baptist, to the north of the cathedral (Photograph: Patrick Comerford, 2021)

4, The Church of Saint John the Baptist:

The Church of Saint John the Baptist, to the north of the cathedral, is a primitive tenth century church and the oldest building on the site. It is 22.5 metres long and 6.7 metres wide.

This is a simple nave and chancel church. 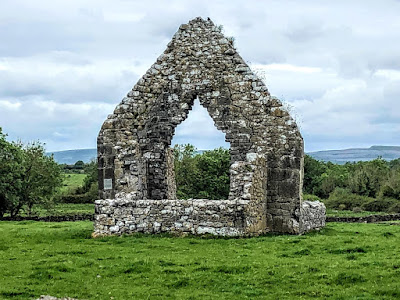 The small and much ruined chancel was added to Saint John’s Church at a later date (Photograph: Patrick Comerford, 2021)

The small and much ruined chancel was added at a later date.

There are two single windows in the remains of the south wall: the east one is pointed and the west window is round. 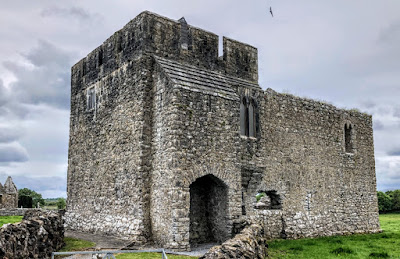 The Glebe House has served as the bishop’s residence and for a small garrison (Photograph: Patrick Comerford, 2021)

The Glebe House or hall house is known as the abbot’s house, and is at the north end of the monastic site, close to the car park. It was built in the 14th century as both a bishop’s residence and a seminary for the education of priests.

The structure was fortified sometime later and contains loopholes, a murder hole a guard tower. 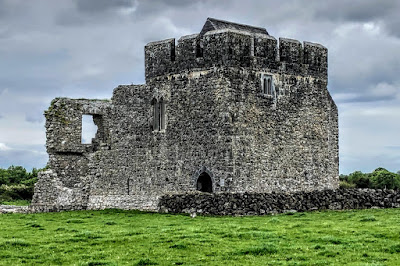 The Glebe House has been restored in recent years (Photograph: Patrick Comerford, 2021)

It is believed that sometime during its history, a small garrison was stationed at Kilmacduagh in this building.

The Glebe House has been restored in recent years, with windows and a new slated roof. 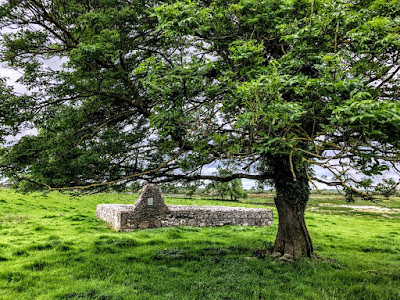 Saint Colman’s Church is a small church or oratory outside the walls of the cathedral and the graveyard (Photograph: Patrick Comerford, 2021)

Saint Colman’s Church, or Tempuil Beg Mac Duagh, is a small church or oratory to the south of the cathedral, outside the walls of the surrounding graveyard.

The church seems to have been extended to the west and the south, but very little is known about the church.

Saint Colman’s Grave is in the graveyard behind the Cathedral/Templemore. Perhaps this oratory was a small tomb shrine that housed the relics of the saint. The remaining gable suggests it was much smaller originally. 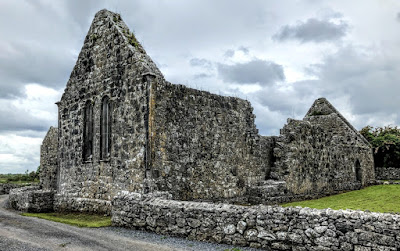 The Abbey of Saint Mary de Petra, also known as O’Heynes Abbey, stands apart from the main site, about 180 metres north-east of the cathedral.

The local ruler, Owen O’Heyne (died 1253), founded the Abbey of Saint Mary de Petra as a house for Augustinian canons.

The Augustinian abbey is also attributed to Bishop Maurice Ileyan (died 1283). But the architectural evidence links only the later added east range of the abbey with Bishop Maurice.

When the north wall of the nave collapsed in the 14th or 15th century, a new wall was built inside, incorporating the original north doorway. Part of the old north wall remains, leaning out at an angle.

The abbey church is a nave and chancel church with a sacristy. Other ecclesiastic buildings extend from the south side. The east gable has two lancets, each flanked by thin pilasters. The gable also has matching pilasters at the north and south corners. There is a narrow round headed window in the south wall of the chancel and below it is a piscina. There is a rectangular window in the east wall of the sacristy.

Most of the other building that extends to the south is lit by narrow round headed lancets.

During the Reformation, the Augustinian abbey was granted to the Earl of Clanricarde. 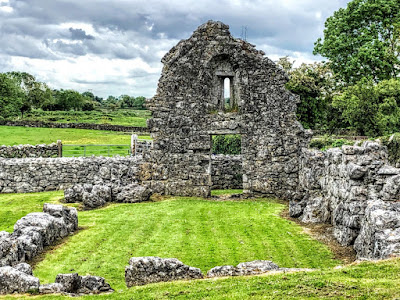 About 10 metres south-west of the abbey church are the remains of another, unidentified building. All that remains of the north, east and west walls are the lower courses.

The south gable has a flat-headed doorway with a round-headed, 15th century window above it. 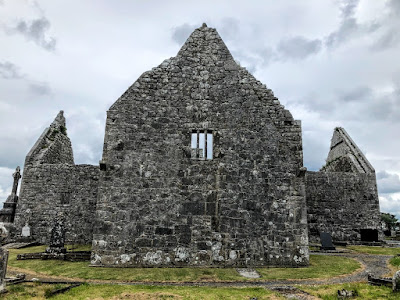 The west end of Kilmacduagh Cathedral … the cathedral fell into disuse and disrepair after the Reformations (Photograph: Patrick Comerford, 2021)

The decline of a cathedral

Kilmacduagh Cathedral began to fall into disuse and disrepair in the religious strife that followed the Reformations in the 16th century.

When Roland Lynch arrived as the new bishop in 1587, he found all the buildings ‘spoiled and wasted.’ He was the last separate Bishop of Kilmacduagh. He also became Bishop of Clonfert in 1602, and the two dioceses were united in 1625.

The cathedral was reroofed in 1640s, but fell into disrepair and disuse and once again in the Cromwellian period.

With the Church Temporalities (Ireland) Act 1833, the united see became part of the Diocese of Killaloe and Clonfert in 1834.

When Dean Butson was installed in Kilmacduagh Cathedral in 1874, he reported, he ‘had to sit upon a tombstone amidst a luxuriant crop of stinging nettles, within the precincts of the roofless cathedral.’

Since 1976, Kilmacduagh is one of the dioceses incorporated into the United Dioceses of Limerick and Killaloe, incorporating Ardfert, Aghadoe, Clonfert, Emly, Kilfenora and Kilmacduagh. Formally, the Dean of Killaloe and Clonfert is also Dean of Kilfenora and Provost of Kilmacduagh, although these appointments have not always been made formally in recent years.

Meanwhile, Saint Colman’s Church in Gort has become a public library, and there is no open Church of Ireland parish church within the boundaries of the former Kilmacduagh. 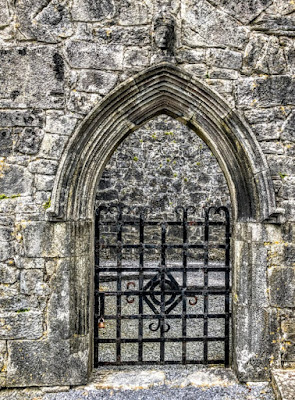 Having spent much of the afternoon in Kilmacduagh, and amusing myself wondering whether I am Precentor of Kilmacduagh as well as Precentor of the other cathedrals in the diocese, it seemed appropriate to return to Gort and to see Saint Colman’s Church, the de facto cathedral of Kilmacduagh for many decades. 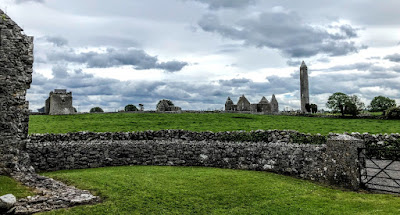 The site at Kilmacduagh, seen from the Augustinian ruins (Photograph: Patrick Comerford, 2021)