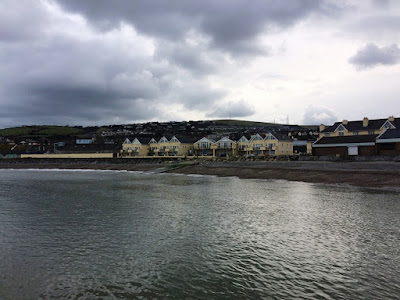 Wicklow Harbour … an invitation to explore the story of Captain Robert Halpin and his pioneering work (Photograph: Patrick Comerford, 2016)

After a long working weekend, two of us headed into Co Wicklow and the Garden of Ireland this afternoon. After coffee in Mount Usher Gardens, we decided to visit Wicklow Town, and parked at the quays which are a reminder of the long history of the town as a port.

After walking around the harbour and along the pebble-strewn shoreline, we decided to explore the town and the story of its most famous son, Robert Charles Halpin (1836-1894), a pioneering figure in the world of telegraphy and communications.

The seven-arch stone bridge was built in two phases in the 17th and 19th centuries (Photograph: Patrick Comerford, 2016)

From the harbour, we walked up Bath Street, and crossed the seven-arch stone bridge spanning the Vartry River at the point where it is known as the Leitrim River. This is an impressive bridge that was built in two phases. It was first built ca 1690, and in 1837 – a year after Robert Halpin was born – Lewis refers to an eight-arch bridge. However, it appears that one arch was later blocked and the bridge was widened to the north in 1862.

The older part of the bridge shows the rough-hewn stone and simple form of its time, while the 19th century shows more articulation and formal definition with a string course and voussoirs of cut stone. Henry Brett, previously county surveyor of King’s County (Offaly), Co Mayo and Co Waterford, was responsible for the 19th century works. 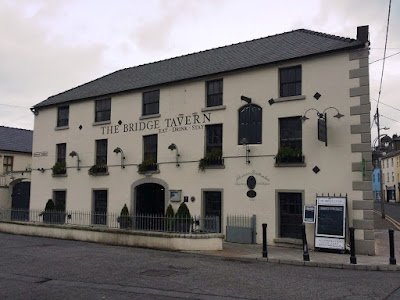 Halpin was born in 1836 close to the bridge, in the Bridge Tavern. This was established in 1759, when it probably replaced an earlier “sheebeen” or drinking house that stood on the same site. In the 19th century, it was known as Halpin’s Bridge Hotel, and was owned by James and Anne Halpin. Robert Halpin was born here in 1836, the youngest of their 13 children, and must have grown up on sailors’ stories of life at sea.

Robert received as early education in a private school at Leitrim House at No 9 Leitrim Place, across the bridge from the hotel where he was born. This is an unusual and striking mid-terrace building, with a pediment and portico we would associate more with public and civic architecture than with domestic buildings.

Although Leitrim House was extensively renovated internally in 1995, when it lost its original fabric, it still retains its form, scale and character and with the other terraces on Leitrim Place, the house forms an important architectural set piece in the town. Its position facing the river makes it a highly visible feature in Wicklow. 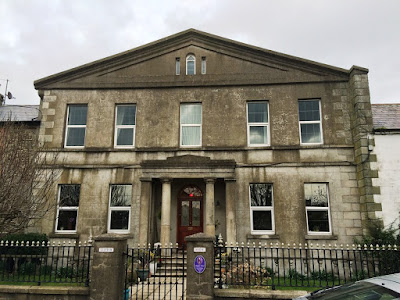 Leitrim House was built ca 1835, and is said to have housed army officers before being used as a school. It is a terraced, five-bay, two-storey over basement pedimented house with attic and with an impressive Doric tetrastyle entrance portico.

The house has a pitched tiled roof, a rendered chimneystack with clay pots and a rendered pediment. There are lined-and-ruled rendered walls, with cut granite quoins and string course. There are square-headed openings with a sill course to the first floor, and granite sills to the ground floor, although the windows are recent replacements.

The round-headed door opening has a replacement timber door and a plain over-light. The carved granite portico has Doric pilasters, piers and columns supporting an entablature with plain frieze. There are granite steps to the portico.

There is a concrete balustrade to the basement area, a cast-iron pedestrian gate with rendered piers, and matching railings on a rendered plinth wall.

The houses on each side of Leitrim House in Leitrim Place include an impressive terrace on the north side of four three-bay two-storey houses built ca1840. They were first used to house army officers, and despite alterations that has seen them lose their original fabric, these houses retain their form, scale and character. 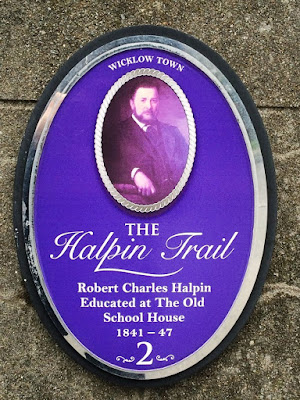 At the age of 11, Robert Halpin followed his older brothers, Thomas and Richard, when he went to sea in 1847 as the youngest member of the crew of the brigantine Briton, and his first mentor at sea was Captain Thomas Lightfoot.

His father died that year and his mother died in 1849. A year later, in 1850, while he was still only 14, Robert survived the shipwreck of the Briton off the coast of Cornwall. But between 1847 and 1857, Halpin sailed the world. He sailed to Australia aboard the barque Henry Tanner, and there he experienced the Kalgoorlie Gold Rush. He was third mate on the wool clipper Boomerang which plied its trade from Liverpool to Melbourne, returning home by Peru and Cape Horn.

By 1857, at the age of 21, he completed his nautical training and qualified as a ship’s captain. That year, he became the first officer on the steamship Khersonese and later that same year took command of the new steamship Circassian.

When the Atlantic Steam Navigation Co. (Galway/Lever Line) was formed in 1858, Halpin joined the new company and in 1859 he took command of the company’s new steamship the Argo. However, on its maiden return voyage from New York the ship ran aground on the coast of Newfoundland. A Board of Inquiry found Halpin negligent and suspended his master’s ticket.

Having lost his right to captain a vessel, Halpin learned that the Confederate States in the American Civil War would richly reward those who could supply food and arms, and he found a new role running the blockades.

The SS Eugenie made 10 successful runs through blockades between May 1863 and January 1864, and in April 1864 Halpin and the steamship Virgin broke through the blockade of Mobile, Alabama.

Although it was a financial failure, the Great Eastern was the ideal ship to carry the enormous spools of telegraphic cable necessary to cross the Atlantic. With the magnificent state rooms and luxurious cabins removed to make way for the thousands of miles of cable needed, it began its voyage, from Valentia, Co Kerry, in July 1865, with Halpin as first mate.

However, disaster struck on 1 August when the cable snapped and sank to the bottom of the ocean. Unable to retrieve it, the Great Eastern was forced to return to port and the mission was regarded as a failure.

But a new attempt was undertaken a year later, in 1866, and the Great Eastern set out once again from Valentia. This time Halpin laid the Trans-Atlantic cable successfully to Heart’s Content, Newfoundland, reaching his destination on 27 July.

The Great Eastern had carried extra cable and set out from Newfoundland on 9 August in an attempting to lay a second cable. On this journey, Halpin found the cable that had been lost the previous year. The cables were spliced together and the Great Eastern returned home to great acclaim. Over the next decade, as captain of the Great Eastern, Halpin successfully laid cables in oceans around the world until he retired from the sea in the mid-1870s.

In 1871, Halpin was charged in Washington, with blockade running but was found not guilty because of insufficient evidence. 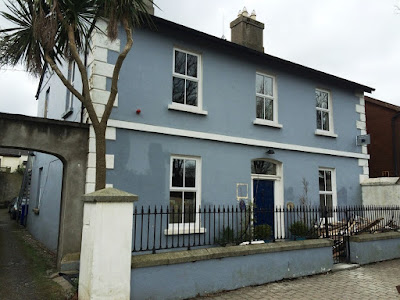 The Halpin family lived at Leitrim Lodge while Tinakilly House was being built (Photograph: Patrick Comerford, 2016)

Meanwhile, while he was in Newfoundland in 1866, Halpin met Jessie (Teresa) Munn. They were married in 1873, and their daughter Ethel was born in 1874, followed by Belle Louisa (1876) and Edith (1879). The family lived at Leitrim Lodge on Bachelor’s Walk in Wicklow, close to the Bridge House where he was born and opposite Leitrim House where he went to school.

Early in 1876, Halpin bought 300 acres at Tinakilly for £12,000, and spent four years building Tinakilly House, which was designed by the architect James Franklin Fuller. The house was completed in 1880 and it is said the stairs and landing were built to resemble the bridge of the Great Eastern.

Happy to be back at home in Wicklow, Halpin helped to organise Wicklow’s first official regatta in 1878 and for many years was a member of the Harbour Board. Against his better judgment, he was persuaded to stand in 1892 election as a Parnellite candidate for East Wicklow. But Halpin was defeated by the anti-Parnellite candidate, John Sweetman (1844-1936).

Then, late in 1893, while cutting his toe-nails, he accidentally nicked a toe. An infection set in, his health deteriorated, and he died from septicaemia on 20 January 1894. Flags were flown at half-mast throughout the town, and ships and fishing boats in the harbour paid their tribute.

On 23 January, his coffin was taken from his home at Tinakilly in an open, horse-drawn carriage to the Church of Ireland parish church in Wicklow. The cortege was one of the largest ever seen in the town, the funeral was conducted by the Rector of Wicklow, Canon Henry Rooke (later Archdeacon of Glendalough) and he was buried in the churchyard, overlooking the town and the sea. 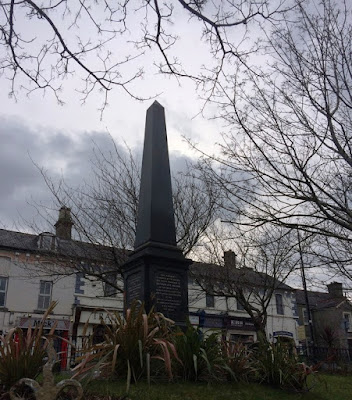 The obelisk in Fitzwilliam Square is Halpin’s memorial in the centre of Wicklow Town (Photograph: Patrick Comerford, 2016)

The granite obelisk in Fitzwilliam Square in the centre of the town was erected in 1897 on a piece of ground provided by Halpin’s friend, Lord Fitzwilliam. The monument honouring Halpin and recognising his contribution to the world of telegraphy was unveiled with great pomp and ceremony on 23 October 1897.

The inscription reads Civi Emerito Civitas Genetrix, “The state is mother to the worthy citizen.”

Tinakilly House remained in the Halpin family until the mid-20th century and the death of his daughter Belle Louisa. 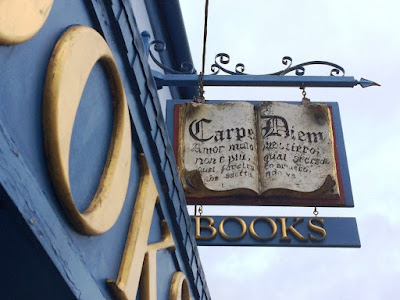 More stories to read … a sign over the bookshop opposite the house where Robert Halpin was born (Photograph: Patrick Comerford, 2016)