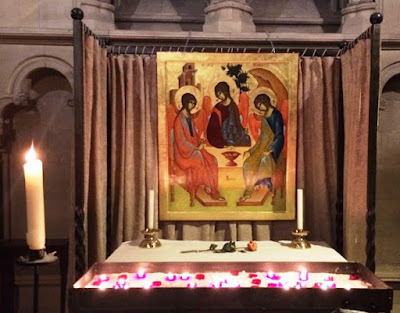 This morning is the First Sunday after Trinity … the icon of the Old Testament Trinity in a side chapel in Christ Church Cathedral, Dublin (Photograph: Patrick Comerford, 2016)

We have had a series of post-Easter celebrations with a high note in recent weeks, from Pentecost through Trinity Sunday and Thursday’s celebration of Corpus Christi.

This morning [29 May 2016], on the First Sunday after Trinity, we find ourselves truly in Ordinary Time, and for the next few Sundays the readings from Saint Luke’s Gospel are about Christ’s compassion for ordinary people, in their ordinary lives, with the crises and difficulties that confront us all in our ordinary lives.

The Precentor, Canon Neil McEndoo, is presiding at the Eucharist, and the setting is Igor Stravinsky’s Mass composed in 1944-1948. At the time, he was writing his Symphony, Ebony Concerto, Concerto in D, and the ballet Orpheus.

The Russian composer Igor Fyodorovich Stravinsky (1882-1971), who was later a naturalised French and American citizen, is widely regarded as one of the most important and influential composers of the 20th century, and his best-known works include The Rite of Spring (1913).

Stravinsky was a devout member of the Russian Orthodox Church and he prayed daily, and before and after composing. He once declared:

Music praises God. Music is well or better able to praise him than the building of the church and all its decoration; it is the Church’s greatest ornament.

This setting is said to exhibit the austere, Neoclassic, anti-Romantic aesthetic that characterises Stravinsky’s work from about 1923 to 1951.

But why, as a devout member of the Russian Orthodox Church, did Stravinsky write a setting for the Western Mass? This is one of only a handful of pieces by Stravinsky that was not commissioned. Is there a parallel between this devout Orthodox believer writing a Mass setting and the Roman centurion in this morning’s Gospel reading (Luke 7: 1-10) who builds a synagogue for the devout Jews of Capernaum?

Stravinsky’s Mass is said to be the product of a spiritual necessity. He once said:

My Mass was partly provoked by some Masses of Mozart that I found at a second-hand store in Los Angeles in 1942 or 1943. As I played through these rococo-operatic sweets-of-sin, I knew I had to write a Mass of my own, but a real one.

Stravinsky chose to compose this Mass despite his own Orthodox faith because:

I wanted my Mass to be used liturgically, an outright impossibility as far as the Russian Church was concerned, as Orthodox tradition proscribes musical instruments in its services – and as I can endure unaccompanied singing in only the most harmonically primitive music.

Stravinsky also said of the Credo:

One composes a march to facilitate marching men, so with my Credo I hope to provide an aid to the text. The Credo is the longest movement. There is much to believe.

The image of marching men expressing their faith through Stravinsky’s Credo certainly evokes images of the centurion in this morning’s Gospel reading and his account of the men and slaves he commands, which is balanced by the faith he expresses in Christ as Lord.

In addition, the Motet during Communion this morning is The Angelic Salutation by Stravinsky, and we have hymns and music too by Percy Dearmer, Orlando Gibbons, John Chadwick, William Maclagan, Josiah Conder, Samuel Sebastian Wesley and Samuel J Stone. 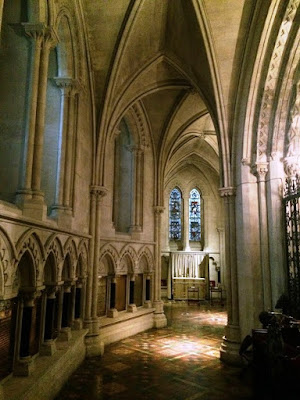