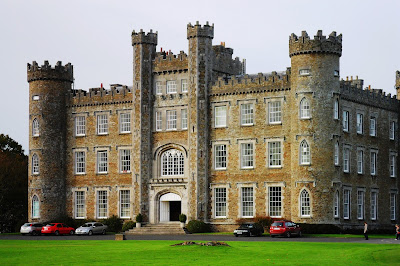 Gormanston Castle, Co Meath … snobbery stopped Evelyn Waugh from buying it in 1946, and the Franciscans bought it a year later (Photograph: Patrick Comerford)

I was writing recently about Evelyn Waugh’s brief plans to buy Gormanston Castle in the 1940s, and wondered where I would have been sent to school instead had he completed the sale.

After World War II, many former officers and members of British landed families tried to flee Attlee’s new taxes and settled in droves. Late in 1946, Evelyn Waugh (1903-1966) began looking at houses in Ireland in the hope of finding “Liberty, Diversity, Privacy.”

During World War II he was an officer in the Royal Marines, when he took part in the Battle of Crete in 1941, and then in the Royal Horse Guards. After his first marriage to Evelyn Gardner broke down, he became a Roman Catholic in 1930. Father Martin D'Arcy (1888-1976), a Jesuit who had Irish parents and who was a lifelong friend of TS Eliot, persuaded Waugh “on firm intellectual convictions but little emotion" that “the Christian revelation was genuine.”

Waugh claimed his great-grandmother, Theodosia Mahon, was from Strokestown, Co Roscommon, but did little work on exploring his Irish ancestry.

He considered Ireland “beautiful” and “Christian,” while England showed more and more “ugliness of mind.” Buoyed by the success of Brideshead Revisited (1945), he first considered buying Gormanston Castle, the ancestral home of the Preston family and of Jenico Nicholas Dudley Preston, the 17th Viscount Gormanston and 4th Baron Gormanston, who was then just a boy of six and whose father, Jenico William Preston, 16th Viscount Gormanston (1914–1940), had been killed at Dunkirk in 1940 during World War II.

Young Lord Gormanston was a great-grandson of the celebrated Victorian artist Elizabeth Thompson (1846-1933), aka Lady Elizabeth Butler. She specialised in painting battle scenes, including the Crimean War and the Battle of Waterloo. Her better-known works include The Roll Call, bought by Queen Victoria, The Defence of Rorke's Drift, and Scotland Forever!, showing the Scots Greys at the Battle of Waterloo and now in Leeds Art Gallery. During the Irish Civil War, many of her paintings, including a set of water-colours painted in Palestine, were transferred to her daughter in Gormanston Castle for safe keeping. She died at Gormanston Castle in 1933, shortly before her 87th birthday.

Waugh did not feel “entirely at ease in the role of nouveau riche invader of an historic property.” But the Irish aristocracy still had a few surprises for this English writer. When he visited Gormanston Castle, he said: “It’s sad to think of this place changing hands after so many centuries.” He claims a worker replied: “Ach, his lordship never came to this place but to kill somebody.”

Waugh described Gormanston as “a fine, solid, grim, square, half-finished block with tower and turrets.” In his diaries, Waugh continues:

“The ground floor rooms were large and had fine traces of Regency decoration. Pictures by Lady Butler were everywhere. There were countless bedrooms, many uninhabitable, squalid plumbing, vast attics. On the whole I liked the house; the grounds were dreary with no features except some fine box alleys. The chapel unlicensed and Mrs O’Connor evasive about getting it put to use again.” Pamela O’Connor was the widowed Lady Gormanston, and had married Maurice O’Connor after her first husband was killed in the war. 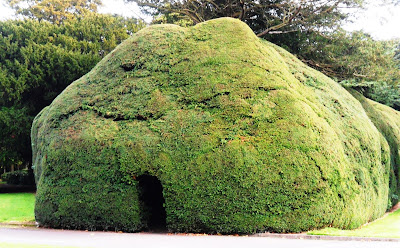 However, on learning that Sir Billy Butlin (1899-1980) was planning to open a holiday camp at Mosney on the beach beside Gormanston, he promptly changed his mind. He explains in his Diaries: “On boarding the ship [for England] I bought a local evening paper and read that Butlin had acquired a stretch of property at Gormanston and was planning a holiday camp there. This announcement made us change all our intentions. It came just in time for us, disastrously for Mrs O’Connor.”

Waugh was premature in predicting the outcome for Mrs O’Connor. There was at least one other bidder, and Gormanston Castle and the surrounding estate were bought by the Franciscans in 1947, just after Waugh’s visit. 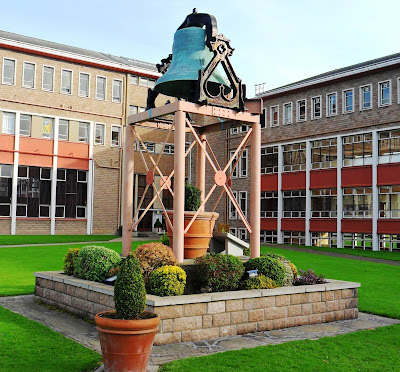 The school buildings at Gormanston were built in the 1950s after the Franciscans bought Gormanston Castle (Photograph: Patrick Comerford)

The Franciscans have been there ever since. A preparatory school for the college in Multyfarnham was opened in the castle in 1954, and new plans resulted in building a new college and the transfer of the Multyfarnham College to Gormanston.

My brother arrived at Gormanston as a schoolboy in 1959, and I followed in the 1960s.

As for Lord Gormanston, when he went to school he was sent to the Benedictines at Downside School in Somerset, which had provided the Franciscans with one of the models for running Gormanston. As schoolboys, we revelled in his every escapade as it was chronicled in the English press.

Despite Waugh’s snobbery, Butlin’s holiday camp opened in Mosney in July 1948 by the Labour leader, William Norton, and it finally closed in the early 1980s.

Evelyn Waugh set one of his novels – Decline and Fall (1928) – in a boarding school. It is based in part on his schooldays at Lancing College, his undergraduate years at Hertford College, Oxford, and his experience as a teacher at Arnold House in north Wales.

In 1949, he explained that his decision to become a Roman Catholic followed his realisation that life was “unintelligible and unendurable without God.” But his traditionalist stance led him to strongly oppose Church reforms, especially the changes introduced by Vatican II, including the vernacular Mass. He disliked the welfare state, the culture of the post-war world and the decline of the country house.

Fifty years ago, on Easter Day, 10 April 1966, after attending a Latin Mass in a neighbouring village with members of his family, Waugh died of heart failure at his home in Combe Florey, Somerset. He was 62. He was buried at the Anglican churchyard in Combe Florey. A Requiem Mass in Latin was celebrated in Westminster Cathedral on 21 April 1966.

I sometimes wonder to this day where my brother and I would have been sent to school if Evelyn Waugh had not been such a snob about Butlin’s and had bought Gormanston Castle 70 years ago. 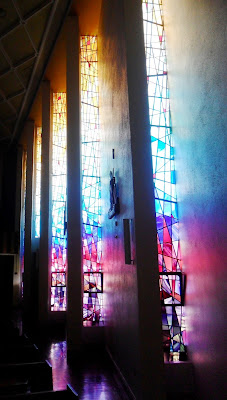 Inside the chapel at Gormanston (Photograph: Patrick Comerford)

May I amplify your interesting piece by adding that Mrs O'Connor (Pamela) is the present Viscount Gormanston's mother. Also I expect you knew when you were at school of the tradition that when a Viscount Gormanston died foxes would come to the chapel door.

Yes Christopher, we used to challenge each other whether we had heard the foxes. There is a fox on the old school tie and in my days the school magazine was called Tally Ho.