‘Ethics at the Beginning of Life’:
a book review in ‘Search’ 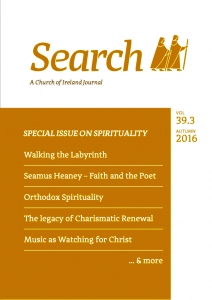 Ethics at the Beginning of Life, A phenomenological critique

The present campaign for the repeal of the Eighth Amendment may soon lead to another referendum on abortion in the Republic of Ireland. In the run up to the election earlier this year, many parties promised a referendum, a group of feminist law academics published model legislation to show what a post-Eighth Amendment law might look like, and more recently the Minister for Health, Simon Harris, voiced his support for a referendum. Since then, the government has appointed a Supreme Court judge, Mary Laffoy, to chair a Citizens’ Assembly to consider a number of topics, including the Eighth Amendment.

The Eighth Amendment, passed in 1983, recognises the right to life of an unborn child and at the time was supported by Fianna Fáil and much of Fine Gael, but was generally opposed by the political left. A new referendum is likely, and is likely to polarise society once again.

In this book, James Mumford of the University of Virginia recognises that when it comes to the debate about abortion in all Western societies, the debates have become intractable, the discussions have been exhausted and the issues hopelessly polarised: ‘Responses … have been reduced to two basic positions, which in the West have fatefully come to be associated with two dominant political options – pro-choice with the left, pro-life with the right.’

Contributions to the debate, whether ‘anti’ or ‘pro’ have taken on a ritualistic form, in which each side repeats words, actions and arguments, without listening to each other.

James Mumford offers a way through this impasse, in which we might not only hear but listen to those we disagree with in a looming debate. Dr Mumford is Postdoctoral Wolterstorff Fellow at the Institute for Advanced Studies in Culture and lectures in philosophy, teaching classes on ethics and human reproduction. He previously worked as a senior policy researcher at the Centre for Social Justice in London while he was completing his DPhil in Theology at Magdalen College, Oxford. He blogs regularly and writes for The Daily Telegraph, The Guardian, The Spectator, The Huffington Post and other newspapers.

In this contribution to the debate on abortion and human life, he draws upon phenomenology to question many of the approaches, attitudes and arguments today. He argues that many of the positions simply fail to take into account the reality of human emergence, the particular way that new human beings first appear in the world.

He divides acute moral questions into two kinds: those about what it is that we are dealing with; and those relating to the situation in which the questions arise. He challenges the core convictions of English-speaking liberal moral and political philosophers, and concludes by exploring an alternative theological basis for human rights that might fill the vacuum created.

He offers fresh arguments about how we relate to unborn and new-born human beings, and challenges accepted ethical arguments, insisting that we look afresh at the assumptions we have made about abortion and the status of the unborn person.
This is a philosophical book rather than a theological book. But there is a moving point at the end of the book where he draws on a sermon of the fourth century Cappadocian Father, Gregory Nazianzus, who appealed to the doctrine of imago Dei when he challenged the people of Caesarea to recognise the shared humanity of the victims of an outbreak of leprosy. This shared humanity was no longer recognised by their family members and former friends, who could no longer recognise their human form and saw them as threats.

I find this book a helpful contribution to trying to get of the impasse we have already created in our society in advance of a coming referendum. If we listen to what James Mumford has to say, we might be more gracious in listening to what we have to say to each other.

Patrick Comerford is lecturer in Anglicanism and Liturgy at the Church of Ireland Theological Institute and adjunct assistant professor in TCD.