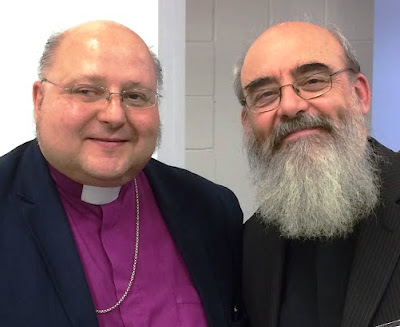 I was at the diocesan synod of Dublin and Glendalough last night [11 October 2016] in Templecarrig School in Greystones, Co Wicklow, and it was interesting to share stories of mission and pilgrimage.

During the debate on the report of the Diocesan Council for Mission, I was able to tell the synod that USPG had returned to using the traditional and long-loved initials describing the mission agency. With recent changes in the structuring USPG in Ireland, I spoke of USPG’s continuing work in mission, and encouraged support in particular for USPG’s work with refugees in Greece.

But it was good too to make links between the mission of the Church today and a mission story that links the Church of Ireland with two other southern European countries, Spain and Portugal.

The two bishops are visiting the Dioceses of Dublin and Glendalough at the invitation of Archbishop Michael Jackson as part of the programme marking the 800th anniversary of the unification of the two dioceses in 1216 under a Papal Bull received by Archbishop Henry de Loundres after the Fourth Lateran Council in Rome.

Both bishops spoke last night of how these two churches on the Iberian peninsula have strong historic links with the Church of Ireland.

After Vatican I, several congregations emerged in Spain and Portugal under the leadership of former Roman Catholic priests, seeking to follow Anglican teaching and order. When one of these priests, Father Juan Bautista Cabrera Ivars (1837-1916), approached Lambeth Palace and the Church of England in 1878 requesting the consecration of a bishop, he received a negative response.

In 1880, the Bishop of Mexico, Henry Chauncey Riley (1835-1904), a missionary bishop of the Episcopal Church in the US, visited Spain and Portugal and accepted the new congregations under his care. This was the beginning of the organisation of both the Spanish Reformed Episcopal Church and the Lusitanian Catholic Apostolic Evangelical Church, each with its own synodical government.

The Lambeth Conference in 1888 opposed any episcopal consecrations in Spain and Portugal that offended the Roman Catholic Church, saying such consecrations would not ‘regard primitive and established principles of jurisdiction and the interests of the whole Anglican Communion.’

But William Conyngham Plunket (1828-1897), 4th Baron Plunket, successively Bishop of Meath (1876-1884) and Archbishop of Dublin (1884-1897), had a long-standing interest in Spain, and in 1891 he ordained his private chaplain, Andrew Cassels, for the newly-formed Lusitanian Church in Portugal.

In September 1894, Archbishop Plunket, with Charles Maurice Stack (1825-1914), Bishop of Clogher (1886-1902), and Thomas James Welland (1830-1907), Bishop of Down, Connor and Dromore (1892-1907), consecrated Juan Bautista Cabrera in Madrid as the first bishop of the Spanish Church. Since then, the Spanish Church has maintained apostolic succession through the bishops of the Church of Ireland.

After Cabrera’s death in 1916, the church remained without a bishop for a time and was placed under the authority of the Church of Ireland. Archbishop Gregg regularly visited Spain and Portugal from 1924 to 1934.

The Spanish and Portuguese churches experienced persecution under the Franco and Salazar regimes. In 1954, Santos M. Molina, who had been jailed in Burgos by the Franco regime, was consecrated a bishop by James McCann, Bishop of Meath and later Archbishop of Armagh, with two North American bishops. Bishop McCann visited Madrid by travelling on a tourist visa.

The Right Rev Jack Coote Duggan (1900-2000), former Bishop of Tuam, Killala and Achonry (1970-1985), was committed to building links between the Church of Ireland and the Episcopal churches in Spain and Portugal. His intimate connections with these churches began in September 1971, when he and his wife, Mary, were on holiday near Marbella and attended an English-language service in Saint George’s Church, Malaga. Introductions followed and Bishop Duggan built on the traditional links with the Church of Ireland, taking an active role in the Spanish and Portuguese Church Aid Society, and acting as locum tenens in Saint George’s, Malaga, which was shared by the Anglican Church and the Episcopal Church.

In 1978, he represented the bishops of the Church of Ireland at the Partners-in-Mission Consultation on behalf of the Iberian Churches, in Lisbon, and supported the request made at that conference for the two Churches to be integrated into the Anglican Communion as full members – a move approved at the Primates’ meeting in November 1979.

In 1980, he took part in the consecration of Bishop Fernando da Luz Soares for the Portuguese or Lusitanian Church, and he was present at Saint Paul’s Cathedral, Lisbon, in 1980 when the Lusitanian Church was formally received into the Anglican Communion. Since 1980, these two churches have been ‘extra-provincial’ churches in the Anglican Communion under the metropolitan authority of the Archbishop of Canterbury.

The Spanish Episcopal Reformed Church has its cathedral at the Cathedral of the Redeemer in Madrid. It cherishes the sacramental tradition handed down through the Mozarabic Rite, which dates back to the 7th and 8th centuries. Saint Isidore of Seville, who was influential at the Fourth Council of Toledo 633, gave the Hispanic rite its final form before the Muslim conquest of the Iberian peninsula. Mozarab is the term used for the Christian population living under Muslim rulers in Al-Andalus.

The church is one diocese, and for administrative purposes it is divided into three zones: Catalonia, Valencian Country, and the Balearic Islands; Andalusia and the Canary Islands; and the Centre and Northern Spain.

In 1998, the two churches became full members of the Communion of Porvoo Churches, which brings together the Anglican and Episcopal Lutheran churches in Europe.

Bishop Carlos said last night that there are more Protestants on the Camino than Catholics. However, he said, there is no place for Protestant pilgrims to receive Eucharist when they finish the Camino. The new Anglican Centre at the end of the Camino de Santiago will cost an estimated $5 million.