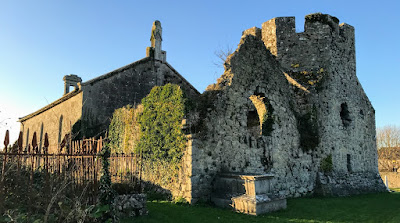 The octagonal tower beside the ruins of the mediaeval church in Askeaton is said to have been built by the Knights Templar in 1298 (Photograph: Patrick Comerford, 2017)

For my first Sunday in the Rathkeale and Kilnaughtin Group of Parishes yesterday [22 January 2017], I presided at the Eucharist and preached in two of the four churches in the group: Castletown Church near Pallaskenry and Holy Trinity Church, Rathkeale.

I have moved into the Rectory in Askeaton, and I am getting to know the parish and the parishioners, the towns and villages and the local people, the area and its antiquities.

One of the oldest buildings in Askeaton is in the grounds of Saint Mary’s Church. The present church was built in 1827, but beside it are the ruins of an earlier, mediaeval church, and on the south-east corner of the church is an unusual tower, associated in local legend with the Knights Templar.

The tower is said to have been built in 1298, which means it predates both the Desmond Castle, which was built in the 15th century on the site of an earlier ruined castle, and the Franciscan Abbey, which was founded in 1389 or 1420. 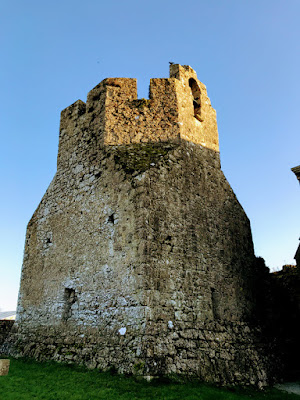 The tower in Askeaton is square at the base but becomes octagonal half-way up (Photograph: Patrick Comerford, 2017)

The tower stands at about six metres high with a base batter, built on a square plan at the base, but halfway up it becomes an octagonal tower, and the tower has a crenellated top. There is a similar ruined tower by the ruins of a former Augustinian Priory in Knocktopher, Co Kilkenny.

The adjoining mediaeval church is in a very ruined state, and only one window remains in the gable end. The church stands at about four metres in height, and is butted up against the present parish church, built in 1827.

In his Topographical Dictionary of Ireland, Samuel Lewis said in 1837 that the Knights Templars originally founded this church in 1298. However, this may not be wholly true, and Lewis mistakenly ascribes many early churches in Ireland to the Knights Templars.

The Knights Templar, or the ‘Poor Fellow-Soldiers of Jesus Christ and the Temple of Solomon,’ were formed in 1118 in Jerusalem. They later adopted the Cistercian rule and formally received Papal recognition from Pope Innocent II in 1130. From humble beginnings, the Templars spread throughout Christendom, with strongholds and estates in most parts of Europe and the in the Holy Land.

The castle in Askeaton seen through a squint window in the tower at Saint Mary’s Church (Photograph: Patrick Comerford, 2017)

The Templars first came to Ireland in September 1220, a century after their original formation. Historians only agree on five Templar foundations in Ireland: Templetown, Co Wexford, where grave slabs in the churchyard mark the burial sites of ‘Poor Fellow-Soldiers’ and where the Templars had lands and houses near Hook Head; Clontarf Castle, Dublin, which was a Templar Preceptory, although the present castle has no connections with them; Baldongan Church, now in ruins, near Skerries, Co Dublin; Ballymote, Co Sligo, where the ruins of a Templar house give Templehouse Lake its name; and the Knights Templars Church at what is today Saint John’s Cemetery at Upper Saint John Street in Wexford.

Other places in Ireland that have links with the Templars include: Carrigogunnell Castle, near Clarina, Co Limerick, said to have been built by the order; Dungeel, near Killorglin, Co Kerry, where a church and a castle said to have belonged to the Templars are in ruins; Graney, near Castledermot, Co Kildare, where reputed Templar ruins stand near the ruins of the Augustinian nunnery; Kilberry, Co Kildare, where the ruins of a possible preceptory of the Knights Templar stand near the River Barrow; Roosky, Co Louth, where part of the priory may have belonged to the Templars; and Strand, Co Limerick, where the church at Temple Strand may be of Templar origin.

But there are many places in Ireland that are also linked with the Knights Templar mistakenly. For example, Kilmainham is often listed as a Templar foundation, although it was a house of the Knights Hospitaller.

The Knights Templar are also said to have built a castle or house on the site of Templeogue House, and this Templar house or castle was later replaced by or incorporated into Templeogue Castle. However, the name Templeogue comes from the Irish Teach Mealóg, meaning ‘New Church of Saint Mel.’

Temple Bar in Dublin, is sometimes linked with the order too, although the name actually refers to a land-owning family named Temple.

On the other side of the River Liffey, one of the mummies in the vaults of Saint Michan’s Church in Dublin is commonly known as ‘the crusader,’ and is sometimes described as a Knight Templar. But this dead knight lived centuries after the dissolution of the order.

The Knights Templar were also shrewd bankers and moneylenders, and this became their downfall. A heavily indebted Phillip IV of France accused them of heresy in 1307, had the leaders thrown into jail and orchestrated a show trial.

With the complicity of the Pope, the Templars were incriminated and tortured. They were suppressed in 1312, and their leaders burnt at the stake in 1313.

Within months, the Templars in Ireland were also arrested on suspicion of heresy and placed in Dublin Castle. Between 15 and 30 knights were taken, most having seen more than 40 years of service with the order. Today, they would be seen as vulnerable pensioners.

The Dublin trials of the Templars began in 1310 in Saint Patrick’s Cathedral. The accusations against the knights were based on hearsay, and no evidence could be found and no confessions were forthcoming. The trials eventually fizzled out, ending after six months in an anti-climax. The Templars were admonished to be good Christians and pensioned off.

It is more than likely that, because of their age, none of them was expected to put up much resistance if left alone. Most knights in Ireland were either pensioned off or taken into other orders, who also acquired the estates of the Templars.

The story that there was ever a Templar Commandery here in Askeaton was first challenged by TJ Westropp in a paper in the Journal of the Royal Society of Antiquities in Ireland. Indeed, another local tradition claims that the church is one of three churches that were built by three sisters. However, the legend gives but no saint or founder is associated with the parish.

Whoever founded the church or built the tower, for centuries this tower also served as the bell tower of the mediaeval church. The bell-cote still has the bell in its place, and a bell rope still hangs from the bell into the tower. 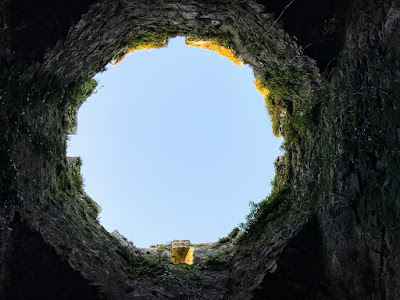 Thanks for the information. I find the Knights Templar fascinating and want to visit the sites in Co Wexford one day.