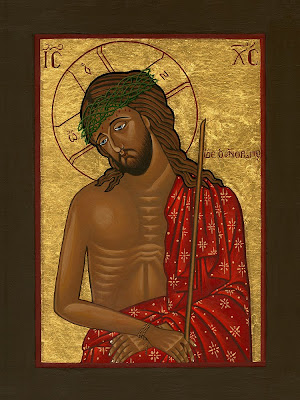 An icon of Christ the Bridegroom

May I speak in the name of + the Father, the Son and the Holy Spirit.

Throughout this week, as we journey together through Holy Week, we continue the gradual build-up from Palm Sunday, with services each evening in this group of parishes. We are here in Saint Mary’s, Askeaton this evening [10 April 2017], in Saint Brendan’s, Tarbert, tomorrow [11 April], then we journey on to Rathkeale on Wednesday, to Castletown for the Maundy Eucharist on Thursday evening, so that we can mark Good Friday prayerfully and appropriately in Saint Mary’s Roman Catholic Church, Rathkeale, at noon on Friday and in Saint Mary’s Church, Askeaton that evening.

All this is to prepare us to celebrate the Resurrection, on Easter Eve in Castletown and on Easter Morning in Tarbert, Askeaton and Rathkeale.

That stepping up of the tempo is reflected in the Book of Common Prayer, for example, where we are provided with the same Post-Communion prayer for today, tomorrow and Wednesday, and then another Post-Communion Prayer and a choice of collects on Maundy Thursday.

The earliest reference to marking this week with special observances is found in the late third century and early fourth century. The Apostolic Constitutions (v. 18, 19) tell us abstinence from meat was expected for all the days of this week, and in addition there was an absolute fast on the Friday and Saturday. Holy Week became an established custom and tradition, and there are pilgrims’ accounts giving complete details of the observance of Holy Week in Jerusalem from around 381 to 384.

The days between Palm Sunday and Maundy Thursday are known as Holy Monday (Fig Monday), Holy Tuesday, and Holy Wednesday, or sometimes Spy Wednesday. The Gospel readings on these days recount events not all of which occurred on the corresponding days between Christ’s entry into Jerusalem and the Last Supper. For example, today’s Gospel [Monday] tells of the Anointing at Bethany (John 12: 1-11), which took place before Palm Sunday (see John 12: 12-19).

In the Western Church, this Monday in Holy Week is not a major feast. But tradition says the cleansing of the Temple in Jerusalem took place on this Monday. This is when Christ overturns the tables of the money-changers, saying to them: ‘It is written, “My house shall be called a house of prayer”; but you are making it a den of robbers’ (Matthew 21: 13).

In the Orthodox tradition, the service of Matins on these first three days of Holy Week – Monday, Tuesday and Wednesday – is known popularly as ‘The Bridegroom Service,’ and includes the ‘Bridegroom Prayer.’ An icon of Christ the Bridegroom is displayed in the centre of the church, showing Christ wearing the robe of mockery and crowned with the crown of thorns. The theme of Christ as the Bridegroom of the Church is extended by drawing on the parable of the ten bridesmaids.

But, alongside the suffering of Christ, three other themes mark Orthodox services on this Monday:

● The story of Joseph (Genesis chapters 37 and 39-40), whose innocent suffering and his persecution by Potiphar’s wife prefigures the suffering of the innocent Christ.

● The cursing of the barren fig tree by Christ on his way into Jerusalem (Matthew 21: 18-22). This serves as an image of the judgment that befalls all of us if we do not produce the fruits of repentance and holy living.

● The demand by the mother of Zebedee’s sons for a place of privilege in the Kingdom for James and John (Matthew 20: 20-28). James and John are seeking pride of place in the Kingdom, in sharp contrast to the humility of Christ, who renounces his status as Creator in order to suffer with and for those he has created.

On this day, do I have ambitions for myself, like their mother had for James and John?

Or am I prepared for the cost of discipleship, of following Christ who renounces all for the sake of all?