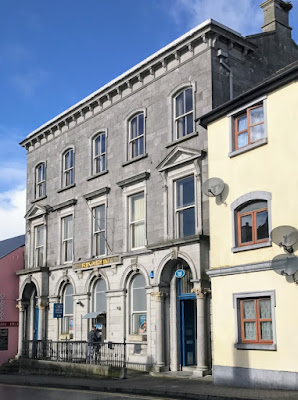 The Bank of Ireland on Main Street, Rathkeale, designed by William Francis Caldbeck, dominates the east end of the town (Photograph: Patrick Comerford, 2017)

If Holy Trinity Church, the Church of Ireland parish church, dominates the sky line at the west end of Rathkeale, with its prominent position on a raised site above the banks of the River Deel, then the east end of the town is dominated by the Bank of Ireland, which towers above the other late Georgian and early Victorian shopfronts and buildings at the east end of the Main Street.

This bank branch, built around 1870, was one of the last great buildings designed shortly before his death by the Dublin-based architect and civil engineer William Francis Caldbeck (1824-1872).

William Francis Caldbeck, a son of Richard Caldbeck and grandson of John Frederick Caldbeck, was born ca 1824. His great-grandfather, William Caldbeck, of Clondalkin and Larch Hill, Whitechurch, Co Dublin, was a barrister, gunpowder-miller and amateur architect.

William Francis Caldbeck was a pupil of the architect, William Deane Butler, before setting up his own practice at the age of 20 in 1844.

Caldbeck was the architect to the National Bank, and was closely associated with the architect John Ryan ‘for many years … in the design and carrying out of many important works.’ He exhibited at the Royal Hibernian Academy through the 1840s, 1850s and 1860s. Caldbeck’s pupils and assistants included John Michael Barry.

In Thom’s Directory, he is also described as ‘consul for Uruguay and Montevideo’ from 1867 until his death in 1872. 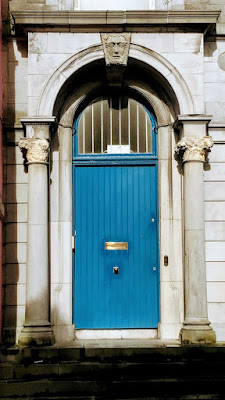 The front door on the west side of the Bank of Ireland on Main Street, Rathkeale, (Photograph: Patrick Comerford, 2017)

The bank Caldbeck designed for the National Bank in Rathkeale stands at a prominent position on the Main Street. His design is a variation of one that is found in many Irish towns. The masonry and detailing are clearly the work of skilled craftsmen. The diversity of treatment of both the stone and the openings adds to the elegance and charm of this attractive building.

This is an attached five-bay three-storey bank, with a two-storey return to the north (rear), having a lower gabled single-bay two-storey block to the rear. 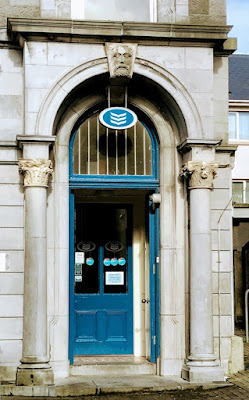 The front door on the east side of the Bank of Ireland on Main Street, Rathkeale, (Photograph: Patrick Comerford, 2017)

The square-headed openings to the rear have dressed flush limestone surrounds and voussoirs, some with timber sliding sash windows, and some with replacement windows.

The round-headed openings to the return and to the ground floor at the rear have dressed flush limestone surround and voussoirs. The flat arched opening to the gabled rear block has a tripartite one-over-one window flanked by a two-over-two pane timber sliding sash window.

The carved elements such as the doorcases and window surrounds give a lively appearance to this solid stone building. The style, form and detailing are typical opulent features of banks of the late Victorian era in Ireland. 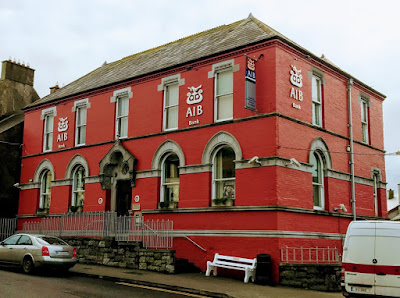 The former Munster and Leinster Bank of Ireland in Rathkeale is said to have ‘an air of almost ecclesiastical grandeur’ (Photograph: Patrick Comerford, 2017)

Nearby, the Rathkeale branch of Allied Irish Bank stands on the opposite side of Main Street, on the corner of Bank Place.

Although architectural websites and archives identify no architect for this building, it is probably the work of the Cork-based architect Arthur Hill (1846-1921), who designed many other Munster and Leinster branch banks in Munster, including those in Mitchelstown, Buttevant, Dunmanway and South Mall, Cork.

Arthur Hill, the son of Henry Hill, was born in Cork on 8 June 1846. He studied at the local School of Art and then studied engineering at Queen’s College, Cork. He then moved to London, where he worked in the office of Thomas Henry Wyatt (1866-1867) and attended the Royal Academy Schools, the West London School of Art, classes at the Architectural Association and lectures at University College.

Between 1866 and 1874, Hill won several awards and it seems he joined his father’s architectural partnership at the end of 1869. He continued to practise in Cork for the rest of his active professional life, a period of 47 years.

In 1891, Hill was appointed a lecturer in the new Architectural Section in the Engineering Department at Queen’s College, Cork. He had a deep interest in the architecture of the past, especially in Celtic Romanesque architecture. He was recognised for his measured drawings of Ardfert Cathedral, Kilmalkedar and Templenahoe, his studies of Cormac’s Chapel in Cashel, and his drawings of the ‘French Prison’ in Kinsale.

Hill married Flora May Houghton from Stoneby, New Brighton, in 1881 and they were the parents of two sons and a daughter. In 1909, his elder son, Henry Houghton Hill, joined his practice.

Hill retired in 1917 after a severe paralytic stroke. But he continued to take an active interest in architecture until he died on 24 February 1921 at Redgarth, Douglas Road, Cork, the house he designed for himself. He had ‘finished his last little drawing only five days before,’ according to his son.

The bank Hill seems to have designed in Rathkeale dates from ca 1880. It is a detached five-bay two-storey over half-basement building, with two-bay two-storey returns to the south or rear.

There is a shouldered square-headed opening to the front elevation, approached by a double-sided flight of cut limestone steps. The timber battened door with has a limestone surround with quatrefoil and circular recesses, a gabled canopy with a trefoil hood, a carved finial and carved brackets.

On the ground floor, the round-headed openings on the north (front) and west (side) elevations have round-headed, one-over-one pane timber sliding sash windows, carved pointed arch surrounds to heads, and a carved limestone continuous impost course and sill course.

The square-headed opening to the ground floor west elevation has a shouldered limestone surround to the head and sharing impost and sill courses, with other windows to the same level.

On the first floor, there are square-headed openings to the first floor, with those on the north (front) and west elevations having one-over-one pane timber sliding sash windows, carved shouldered surrounds to the heads and a continuous carved limestone sill course.

There square-profile cut limestone piers to entrance, a rendered boundary wall to the south-west, and camber and square-headed openings to the rear with replacement windows.

The imposing appearance of this bank is heightened by its raised ground floor, the flight of steps to the entrance and the elaborate doorcase.

The red brick construction is unusual in Rathkeale and is emphasised by the decorative eaves course. The brick is offset by the carved limestone details, which show evidence of fine stone crafting and it has been said that all this lends ‘the building an air of almost ecclesiastical grandeur.’