A day in Glenstal Abbey,
with its monastery church
and unusual castle I spent Saturday in Glenstal Abbey at the Ministry Day with bishops, priests and readers from the dioceses of Limerick, Killaloe and Ardfert and Tuam, Killala and Achonry, in a full day of discussions about how we can resource and develop ministry throughout these two neighbouring dioceses.

Glenstal is known for the school that is run by the Benedictine monks of Glenstal Abbey, on the edges of the Co Limerick village of Murroe. But Glenstal is also an important building architecturally and as a quiet place of spiritual rest and retreat.

The Norman Revivalist castle at Glenstal was designed by the English architect William Bardwell (1795-1890) and was built in 1839 for the Limerick philanthropist and entrepreneur, Sir Matthew Barrington (1788-1861).

The castle has a great gate and a massive drum tower that resembles the one at Windsor Castle. On the top of the tower is a Latin inscription, Bardwell me fecit 1839, ‘Bardwell made me 1839.’ Bardwell gained celebrity status in 1835 by submitting a Norman-style proposal for rebuilding the Houses of Parliament in Westminster. 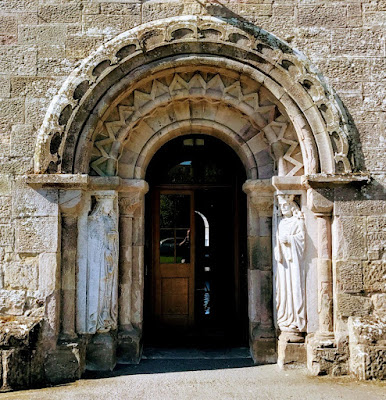 The figures of King Henry II and Queen Eleanor at the main door into Glenstal Castle (Photograph: Patrick Comerford, 2017)

To emphasise that this castle is in the Norman Revivalist style, and to boost the Barrington family’s claims to royal descent and noble lineage, the figures on each side of the main entrance represent King Henry II of England and Normandy, and his wife, Eleanor of Aquitaine.

Bardwell’s design is a unique mixture of architectural features, combining the mediaeval past of Ireland and England, with Anglo-Norman and Irish Romanesque influences, and inside there are highly unusual decorative carvings in the Irish Romanesque style. An elaborate Romanesque doorway is a copy of the portal inside Killaloe Cathedral, Co Clare was created. 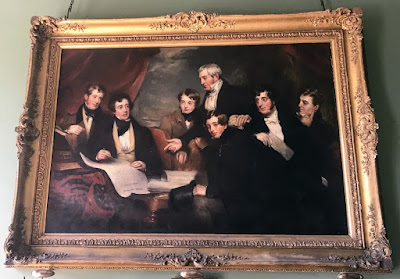 A painting in the castle by Martin Cregan and dating from 1830, shows the Barrington family preparing plans for Barrington’s Hospital in Limerick. The plaque over the hospital door credits Joseph with its establishment, but his son Matthew was the driving force behind the project. Joseph Barrington is standing and pointing to Matthew Barrington, second from the left, recognising his elder son’s major role in the venture and acknowledging him as the future head of the family.

The gardens include the Lady Garden, named after Sir Matthew’s wife, Charlotte, the chapel lake and bridge built in 1860 by the engineer William Le Fanu (1816-11894), and the 17th century Italian-style terraced walled garden, laid out between 1679 and 1681 and reshaped by the Barrington family.

In 1925, Sir Matthew Barrington’s grandson, Sir Charles Barrington, offered Glenstal Castle to the Irish Free State as an official residence for any future head of state. The offer was considered seriously, and WT Cosgrave carried out what he called ‘an exhaustive survey’ of the castle. However, the vice-regal lodge in the Phoenix Park, now Áras an Uachtaráin, was chosen instead, and when Sir Charles and Lady Barrington left Ireland permanently in 1925, the castle and estate were bought by Monsignor James Ryan for a mere £2,000. 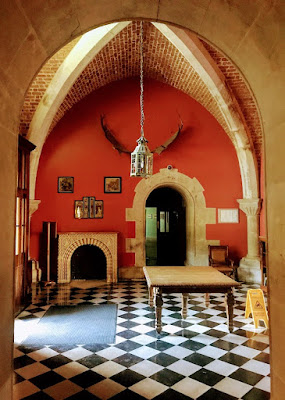 Some months after he bought the castle, Monsignor Ryan wrote to Celestine Golenvaux, the Abbot of the Benedictine Abbey at Maredsous in Belgium, and invited him to come to Ireland and set up a daughter house in Glenstal.

By March 1927, the first two Belgian monks had arrived at Glenstal to establish a new house. In September 1932, the monks opened a new secondary school with Father Columba Skerret as Headmaster, and an initial intake of seven schoolboys. In 1957, Glenstal became an abbey, dedicated to Saint Joseph and Saint Columba.

Glenstal Abbey is a working abbey known for its simple but warm hospitality, with spiritual guidance available to all visitors.

Over the main arch leading into the abbey, large bronze letters proclaim the Benedictine motto: PAX, ‘Peace.’ As the monks say, a ‘monastery is a place where peace reigns, where the monks practice fraternal charity towards one another and to all with whom they come into contact. A monastery is a place apart, where all may find peace, quiet recollection and ultimately, God.’ 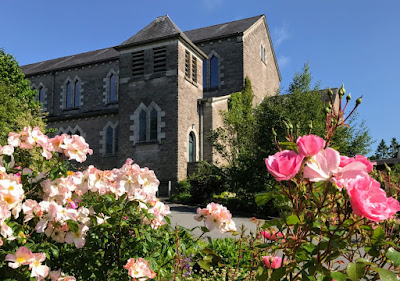 The abbey church was designed by Father Sebastian Braun, an architect and a monk of Maredsous. The foundation stone of the abbey church was laid on 14 October 1951 by Archbishop Jeremiah Kinnane of Cashel, who opened and blessed the church on 24 June 1956.

The church includes some of the work of Brother Benedict Tutty (1924-1996) of Glenstal, including the cross over the altar, the Stations of the Cross and the tabernacle. The stained-glass windows in the Blessed Sacrament Chapel are the work of Patrick Pye.

I made a point of spending part of the day in the icon chapel in the crypt of the main church. This Russo-Byzantine style chapel houses the abbey’s collection of Russian and Greek icons. This is a unique sacred space and it is a reminder that monasticism has its roots in the Christian East.

This chapel, designed by the architect Jeremy Williams, is in the traditional Byzantine style. It takes the shape of a cross in a square with a central circle surmounted by a dome. The altar, in traditional Orthodox fashion, is in a small apse accessed through the ‘royal doors.’ Beneath the dome, in painted glass, the artist James Scanlon has depicted the four figures representing the four Gospel writers. 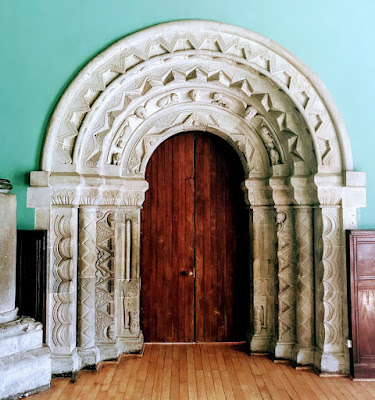 A Romanesque door inside the castle was inspired by Killaloe Cathedral (Photograph: Patrick Comerford, 2017)

The abbey follows a daily monastic routine of Matins and Lauds in the morning, the Community Mass at mid-day, Vespers in the evening, and Compline at the end of the day.

There was time too for a quiet time in the gardens, with the magnificent arboretum with ancient specimen trees, one of the few remaining parts of the primeval forest that once covered Ireland. Before I left, I spent some time in the Abbey gift shop, buying some books and some cards with icon prints. 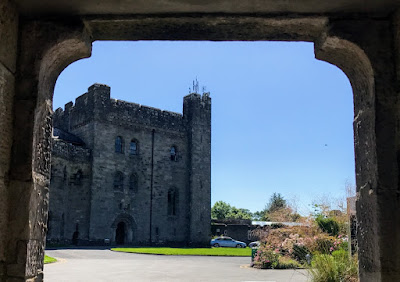