When science meets
science fiction among
dogs in a cathedral

It’s a dog’s life … if you ignore the public notices (Photograph: Patrick Comerford)

This is the First Sunday after Trinity [18 June 2017]. I am in Saint Mary’s Church, Askeaton, Co Limerick, presiding and preaching at the Parish Eucharist, and then in Saint Brendan’s Church, Kilnaughtin, in Tarbert, Co Kerry, leading Morning Prayer and preaching.

Someone once told me that it seems as though the Church of Ireland goes into slumber mode during the summer season, and nothing happens once the schools break up for holidays, and while farmers are busy in the fields taking advantage of the early mornings and late evenings.

This is Ordinary Time, when the liturgical colours turn to Green, an appropriate colour when we think of the ordinary green colours in our fields in this season, and the ordinary green of traffic lights that allow us to go about our mundane, everyday tasks that make our lives continue in their ordinary glorious way. And I hope to say something about Ordinary Time in my sermons later this morning.

But this is proving to be a busy weekend. After a late return on Friday evening from the Court of Examiners in the Church of Ireland Theological Institute for the MTh course and Trinity College Dublin, I was speaking at the Ministry Day in Glenstal Abbey for the Dioceses of Limerick, Killaloe and Ardfert and Tuam, Killala and Achonry. Later this afternoon, three parishioners are being confirmed in Holy Trinity Church, Rathkeale, and I have a school assembly and a school board of management in Rathkeale tomorrow.

And sometimes shafts of humour can break through the ordinary to make it extra-ordinary. Academic commitments on Thursday meant I missed the Corpus Christi celebrations in Christ Church Cathedral. But later, I saw the service sheet which included notices for this Sunday.

This evening, the Irish Guide Dogs for the Blind are special guests at Choral Evensong in Christ Church Cathedral when the music includes John Rutter’s setting of All things bright and beautiful, and a motet by Eric Finch that is a new commission: Quanti canis parvus in fenestra?

Among a group of academics last week who were discussing how much Latin we had retained, few could translate the phrase, but they quickly engaged with the sense of humour.

Patti Page’s recording of How much is that Doggie in the Window? went to No 1 in the US on 4 April 1953, staying at that top spot for eight weeks. It was the first No 1 hit with a question mark in the title.

Another Latin version of song title is used as the motto of the fictional city of Ankh-Morpork in Terry Pratchett’s Discworld series. The city’s motto is said to be ‘Quanti Canicula Ille In Fenestra?’, which translates as How Much is That Doggie in the Window? 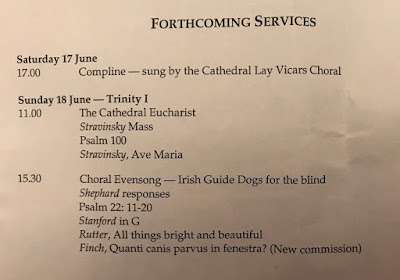