Popular puppets find
new relevance in
the streets of Athens 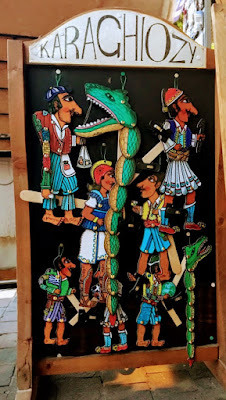 Colourful characters from Karagiozis on sale in the Plaka (Photograph: Patrick Comerford, 2017)

The streets of the Plaka are lined with tourist shops, selling icons, souvenir reproductions, colourful trinkets and cheap T-shirts. But popular items also included colourful characters from Karagiozis or Karaghiozis (Καραγκιόζης), the shadow puppet theatre that takes its name from a popular character in Greek culture and folklore.

All these colourful puppets are two dimensional and are seen in profile, made in either wood or cardboard, with their torso, waist, feet and arms as separate pieces that are joined together with pins and that are moved with sticks attached to their backs.

Karagiozis is a well-loved figure in Greek folklore, performed at folk feasts, festivals and on television. In Greek daily speech, the name Karagiozis is also used as an insult more or less like clown. But, while Karagiozis can be violent, mischievous, a liar and an anti-hero, he is also good-natured and faithful.

Everyone in Greece loves Karagiozis, and recalls with affection the regular, weekly Karagiozis shows on Greek television in the 1980s, which showed Karagiozis living out some Greek myths or visiting the moon and other planets.

The name Karagiozis or Karaghiozis (Καραγκιόζης) comes from the Turkish Karagöz (‘dark eye’). Karagiozis may have come to mainland Greece from Anatolia at the 19th century, during Ottoman rule. Karagiozis was Hellenised in Patras at the end of 19th century by Dimitrios Sardounis, also known as Mimaros, the founder of modern Greek shadow theatre, and soon became popular throughout Greece.

There are several legends about the arrival of Karagiozis in Greece and his growth in popularity in Greece. Some stories say that Greek merchants brought the art from China and others say that it was a Greek who created the legend under Ottoman rule to entertain the sultan. Others say it began in real events involving two masonry workers, named Karagöz and Haci Ivat, who were building a mosque in Bursa in Turkey in the early 14th century.

Karagiozis is a poor hunch-backed Greek, with a long right hand, clothes that are ragged and patched, and bare feet. He lives in a poor cottage (παράγκα) with his wife Aglaia and their three sons under Ottoman rule. The scene shows their cottage on the left, and the Sultan’s Palace (Sarai) on the far right.

Because of his poverty, Karagiozis uses mischievous and crude ways to find money and to feed his family. 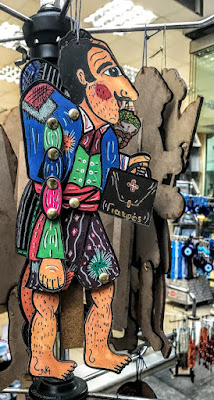 Karagiozis the doctor … one of the many tales in the puppet theatre (Photograph: Patrick Comerford, 2017)

There are many tales, including one-well known one that involves Alexander the Great and the accursed snake, and others that tell of Karagiozis the doctor, the cook, the senator, the scholar, the prophet, the fisherman, the gorilla or even the ghost.

The traditional stories follow a pattern that remains in many of the shows to this day.

Karagiozis appears with his three sons, dancing and singing. He welcomes the audience and has a comical dialogue with his children. He then enters his cottage.

The Vizier reports that he has a problem and needs someone to perform a deed. Hadjiavatis obeys and keeps on announcing the news until Karagiozis hears it.

Karagiozis sees an opportunity to make money and sometimes asks Hadjiavatis to helps him.

Karagiozis sets out either to help the vizier or to fool him. The regular characters appear one-by-one, with an introducing song. Karagiozis has a funny dialogue with them, mocks them, fools them, or becomes annoyed and throws them out violently.

Finally, Karagiozis is either rewarded by the vizier or his mischief is revealed and he is punished, usually by Veligekas, the vizier’s bodyguard.

The main character, Karagiozis, is a trickster and a poor man whose main interests are sleeping and eating. He is close to Hadjiavatis – sometimes they co-operate, but sometimes Hadjiavatis falls prey to Karagiozis abd his schemes.

Anglaia (Αγλαΐα), Karagiozis’ wife, is usually not seen, but her nagging voice can be heard coming from the house.

Hadjiavatis (Χατζηαβάτης) is Karagiozis’ friend and sidekick, an honest and serious figure but often ends up being caught up in Karagiozis' schemes. He flatters the powerful and can be subservient, unlike Karagiozis.

Barba Giorgos (Μπάρμπα Γιώργος, ‘Uncle George’) is a crude villager from the mountains, a shepherd or dairy farmer who comes to town on business. He is sometimes a Vlach from Rumeli, knows little about urban life, is broad and strong in build, and dresses in traditional clothing. Although he believes his nephew is a crook, he helps him out and beats all the opponents black and blue with his staff.

Stavrakas (Σταύρακας) has a long independent arm. He represents the mangas culture in Piraeus and the Rebetiko tradition, and Karagiozis teases him rather than bullying him.

Sir Dionysios (Σιορ Διονύσιος) is an Italian aristocrat from Zakynthos who sings cantades and speaks in Ionian Greek with a lampooned accent.

Morfonios (Μορφονιός) is ugly, with a huge head with an extremely large nose. But he thinks he handsome and is always falling in love.

The Vizier (Βεζύρης), sometimes called the Pasha (Πασάς), lives in the Sarai. He begins each new tale by announcing the trials, deeds and tests in which Karagiozis becomes entangled.

Fatme (Φατμέ) is the Vizier’s beautiful daughter. She causes trouble by opposing her despotic father or by showing her dislike for Karagiozis or one of the heroes.

Veligekas (Βελιγκέκας), an Albanian guard in the Sarai, is always on the lookout for Karagizis and never loses an opportunity to give him a good beating. But then he is usually gets beaten by Barba Giorgos. Sometimes, he is replaced by Peponias (Πεπόνιας), a fat officer in the Sarai.

Puppeteers often devise their own tales, but there are many traditional tales, handed down from earlier puppeteers and form a ‘canon,’ although there may be variations, and usually there is interaction with the audience.

The stories of poverty and of the oppressed man overcoming the domineering oppressor have many resonances in Greece today, which explains a revival in the popularity of Karagiozis. But I wonder if today’s economic woes are considered by tourists as they look with curiosity on these colourful characters that are a unique part of Greek culture and folklore.