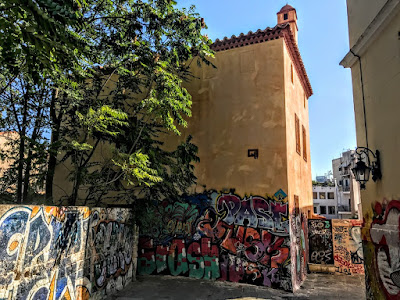 Strolling through the Plaka on Saturday [19 August 2017], I wanted to see the old mansion that had been home to Sir Richard Church, the Irish-born Philhellene, while he lived in Athens.

During this search, I came across the oldest house in Athens, which dates back to the 17th century.

The Mansion of Benizelou, the oldest surviving house in Athens, is located at 96 Adrianou Street, in Plaka. This house once belonged to the aristocratic family of the Athenian leader, Angelos Benizelou, his wife Sirigi Palaiologina, and their daughter Regoula. Their names indicate they were from old Venetian and Byzantine families.

Regoula Benizelou was widowed at a very young age and decided to dedicate her life to charity by becoming a nun as Sister Philothei. She founded a monastery and her charitable work among both Christians and Muslims attracted the attention of the Ottoman powers and led to her martyrdom. She is now revered as Saint Philothei.

This is one of the few Athenian noble mansions. The house dates back to the 16th century, although most of what we see today dates from the late 17th and early 18th century. It had many characteristics of Ottoman architecture of its day, with a loggia, a patio and a well.

This house has been restored in recent years by the Ministry of Culture and the Archdiocese of Athens and opened as a museum earlier this year [February 2017]. 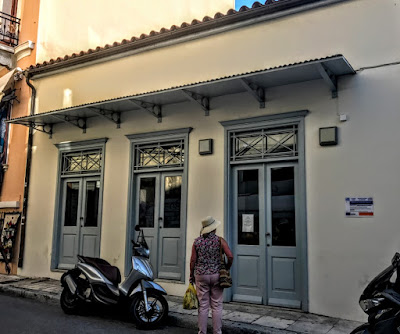 The Mansion of Benizelou, the oldest surviving house in Athens at 96 Adrianou Street (Photograph: Patrick Comerford, 2017)

The remains of what might have been the second oldest house in Athens also stand in the Plaka. The Mansion of Logotheti stood at what is now 14B Areos Street. All that has survived are the gate, the fountain and a small section of the yard. These once belonged to a magnificent mansion built in the 17th century.

This villa was once the home of the British consul in Athens, Spiridon Logothetis, and his family. They hosted Thomas Bruce, Earl of Elgin, when he visited Athens.

I was on my way to join a guided visit to the Acropolis and the Acropolis Museum, so it was interesting to hear that it was at this house the Parthenon Sculptures spent their last nights in Athens before they were shipped to London.

Because the gardens but not the Logothetis mansion have survived, the second oldest surviving house in Athens is the Tower of Church, on the corner of School Street and Epicharmou Street in the Plaka.

This three-storey tower was fortified, and this distinguishes it from all other buildings in the Plaka. It is one of the few Ottoman buildings in Athens that to have survived to this day.

This house was built in the 18th century, and was used by the Ottomans as a fortified post, before being sold in 1835 to the Scottish historian and Philhellene George Finlay (1799-1875). Finlay gave the house to his friend and comrade, Sir Richard Church (1784-1873), the Cork-born general, and so it is known as the Tower of Church.

In the 1920s, it was also known as House Dialisma, and was feted in a painting by the Greek artist Yannis Tsarouchis (1910-1989). But, despite recent renovation work, the house is closed up today, is covered in graffiti, and there are signs or plaques to indicate the important role it played in the Greek War of Independence in the 19th century.

Sir Richard Church (1784-1873), who lived in this house, has been described as the ‘liege lord of all true Philhellenes.’ Church was born in Cork into a Quaker merchant family. In his youth, he ran away to join the army. His Quaker parents were disowned or excommunicated for buying him a commission and so they became Anglicans. He arrived in Greece in 1800 as a 16-year-old ensign serving under Sir Hudson Lowe from Galway. Lowe, who is remembered as Napoleon’s jailer, was the second-in-command in the expedition to the Ionian Islands.

Church soon began providing military training for Greek revolutionaries, including Theodoros Kolokotronis, who became the pre-eminent general in the Greek War of Independence. Church recruited the Greeks troops who captured Paxos and the town of Parga on the mainland, and assisted in the negotiations for the surrender of Corfu. By then, he had become ‘more Greek than the Greeks.’

One of his first actions was a disastrous attempt to drive off a Turkish force besieging the tiny Greek garrison in the Acropolis in Athens. But he soon rallied his forces and stirred a fresh rebellion across the northern Peloponnese. A major turning point in the War of Independence came at the Battle of Navarino, the last sea battle of the age of sail.

Thanks largely to the actions of Church and Gawin Rowan Hamilton, an Irish officer in the British navy, a large Turkish naval force was defeated in a four-hour battle in October 1827. Turkey’s naval power was broken and Church rejoiced at what he called ‘this signal interposition of divine Providence.’

King Otho (r. 1832-1862) restored Church to the rank of general and appointed him Inspector-General of the army. But Otho was a despot, and in 1843 Church played a key role in a coup d’état, presenting the king with an ultimatum that demanded reforms or his abdication. Otho later took his revenge on Church, dismissing him from his post as Inspector-General. But Church remained a life senator and during the Crimean War (1853-1856) he was recalled as a general. A popular revolt in 1862 finally forced Otho to abdicate.

Church often travelled with nothing more than his Bible and his sword. He believed the Greek struggle was a holy war. This connection between his faith and action is seen in Saint Paul’s Anglican Church, Athens, where two sets of windows to his memory use Old Testament imagery to represent the Greeks as the chosen people and Greece as the Promised Land. Church is represented as Caleb who helps them capture the land from the Gentiles, and as David who, despite his stature, defeats the Philistines. The inference is that the Turks were Amalekites or the Philistines who deprived the Chosen People of the Promised Land.

Later in the afternoon, I walked along Tzortz Street (Οδός Τζορτζ), in a depressed corner of Athens off Kanigos Square and Akadimias Street. When he was writing in Greek, Church spelled his name Τζορτζ. It is such a pity that the English transliteration of the street name is not properly rendered as Church Street.

Very interesting. Good to know that about the houses and Church