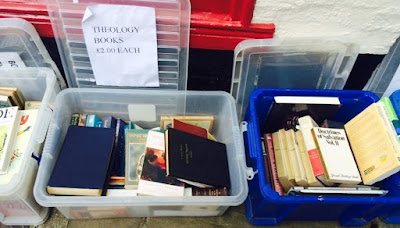 You can buy part of Salvation for £2 in Cambridge, and visiting one Cambridge church you could imagine Oliver Cromwell is hailed as a saint.

I intended to visit David’s Bookshop – one of the nest second-hand bookshops I know – during my week of study leave in Cambridge, but found it was blocked off yesterday [3 September 2015] as the film crews decked it out in 1950s for filming a new series of Grantchester, based on the sleuth-vicar novels by James Runcie.

Instead, I found myself rummaging through baskets outside another nearby second-hand bookshop, where all theological books were priced at £2, including Doctrines of Salvation, Volume II. 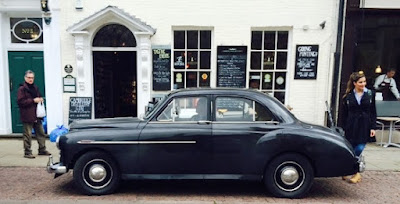 Around the corner, King’s Parade had a number of period cars being used as props for Grantchester, whose author, James Runcie, is a son of a former Archbishop of Canterbury, Robery Runcie. 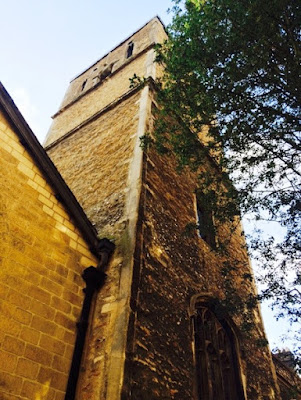 Another former Archbishop of Canterbury, Michael Ramsey, had close connections with Cambridge, and was briefly Vicar of Saint Bene’t’s Church in the late 1930s.

The future archbishop spent his childhood in the late Victorian academic environment of Cambridge and attended the famous Choir School of King’s College before going on to Sandroyd in Surrey and then to Repton, where the young headmaster was Geoffrey Fisher, later to be Ramsey’s immediate predecessor as Archbishop of Canterbury.

At Cambridge, he was strongly influenced by his reading of William Temple and the lectures by the New Testament scholar Edwyn Clement Hoskyns, the Anglo-Catholic Dean of Corpus Christi College.

He received a second class in the classical tripos or examinations in 1925. By then he had decided to study for the Anglican priesthood. After a year of graduate study he received a first class in the theological tripos, and on the advice of Eric Milner-White he entered Cuddesdon College near Oxford in 1927 to train for ordination.

His mother died in a car crash that year, and shortly afterwards his brother Frank, a brilliant economist at Trinity College, also died suddenly. Michael Ramsey went through a period of acute depression and did not return to Cuddesdon for a term.

He was ordained deacon in 1928, and priest in 1929. Two years later, in December 1938, he returned to Cambridge as the Vicar of Saint Bene’t’s Church.

However, he remained only a year in Cambridge this time before moving to Durham as a Canon of Durham Cathedral and Van Mildert Professor of Divinity at Durham University. 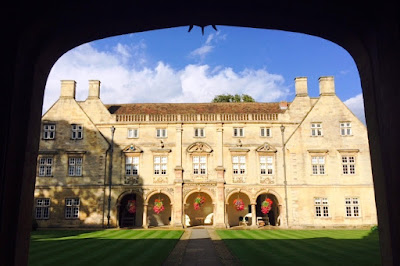 The Pepys Library at Magdalene College, where Michael Ramsey was a student and his father was a don (Photograph: Patrick Comerford, 2015)

He returned to Cambridge the following year when he was appointed Regius Professor of Divinity at Cambridge and a Fellow of Magdalene College in 1950. He expected to settle into academic life in Cambridge for life, and was surprised to be appointed Bishop of Durham.

Later in life, he was an honorary fellow of both Magdelene College and Selwyn College, Cambridge. His memorial stone in Canterbury is inscribed words from Saint Irenaeus that were quoted regularly this week during the IOCS summer conference in Sidney Sussex College: “The Glory of God is the living man; And the life of man is the vision of God.” 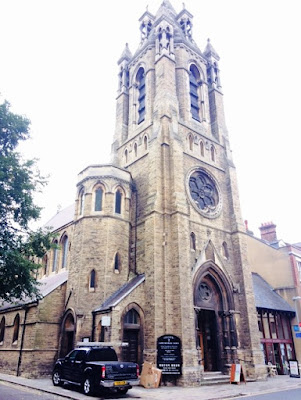 Archbishop Ramsey is still remembered fondly in Saint Bene’t’s, where the Ramsey Rooms, created at the west end of the south aisle in 2002, beside the tower, are used for Sunday School and other meetings.

But he is also remembered in Emmanuel United Reformed Church, the former Congregationalist Church beside Little Saint Mary’s Church on Trumpington Street, where his father was once an elder.

The church traces its origins back to early Puritans in Cambridge and the eventual foundation of a dissenting chapel in Downing Place, near the present site of Downing College.

When the Downing Place Chapel close, the congregation moved, and the present church opened across the street from Corpus Christi College in 1874. 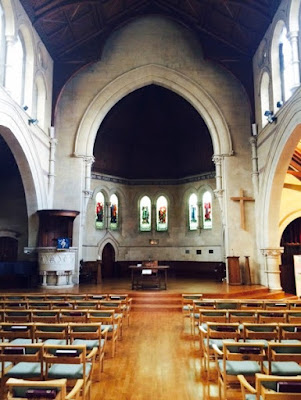 The story of the church is told on panels around the side, and recall that as a child Michael Ramsey attended the church with his father. However, his biographer, the Cambridge church historian Owen Chadwick, who died earlier this year, recalled:

“The young Michael found Emmanuel Church austere, and later, when he knew what that meant, puritan. They sat in the family pew. He thought the extemporary prayer very long and hard to bear. The sermons were livelier, for the resident minister Carter was a cultivated man. Michael’s sister found him a fidget in church and thought it was fidgeting to excess. He whiled away the time by contemplating the stained glass lancet windows behind the preacher and the holy table.” 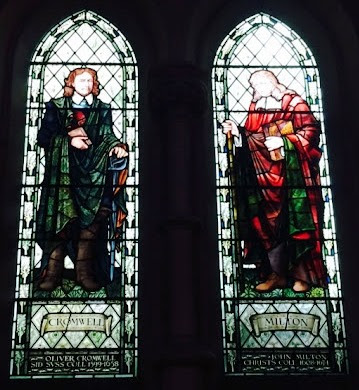 Oliver Cromwell and John Milton in the central pair of windows in the apse in Emmanuel Church (Photograph: Patrick Comerford, 2015)

The six lancet windows in the apse that helped Michael Ramsey while away those Sunday mornings depict, to the left, two 16th century Puritan martyrs, Henry Barrow of Clare College and John Greenwood of Corpus Christi College; to right, the Puritan Francis Holcroft of Clare College, who was among the ‘ejected ministers’ in 1662, and Joseph Hussey, the first Puritan minister of the meeting house from which Emmanuel evolved; and in the centre Oliver Cromwell of Sidney Sussex College and the poet John Milton of Christ’s College.

The windows, which were installed in 1906, and came from the workshops of William Morris & Co, who also supplied many of the windows in All Saints’ Church in Jesus Lane.

These are the six “Puritan saints” of Cambridge, and I found it interesting to think that Michael Ramsey spent so much time contemplating Oliver Cromwell above the holy table in Emmanuel Church, while I have often dined at a table beneath the portrait of Oliver Cromwell in Sidney Sussex College.